Here’s an interesting thought-experiment: What if everyone in the world went blind? 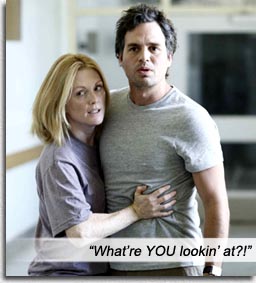 BLINDNESS unflinchingly explores how humans would deal with the worldwide loss of sight – like a pack of animals. Any surprise?

A man goes blind in his car, waiting at a red light. Another man helps him home, then steals his car. Then he goes blind too. Gradually, for no reason, one person at a time, the world becomes sightless.

Mark Ruffalo is an ophthalmologist, Julianne Moore, his wife. (These two would be reunited in THE KIDS ARE ALRIGHT (2010) as lovers. Seems Moore does her best acting around Ruffalo, like he is her Muse or something.) Needless to say, the eye doctor goes blind. But his wife remains sighted.

When the blind population reaches epidemic proportions, the government (oh, gutless, useless, giant worm-thing with no real solutions for anything) herds them into quarantined dorms, guarded by military, and shot if they step outside their zone.

The dorms turn into dumps, excrement everywhere, people wandering naked; we can almost smell the filth, as apathy, ignorance and fear overcome the growing blind population.

Moore pretends blindness to the guards and other inmates, helping the blind in pragmatic ways – until apathy turns to organization, turns to corruption.

Gael Garcia Bernal (Y TU MAMA TAMBIEN) is the self-proclaimed King of Ward Three, wielding a gun that no one can see and that he can’t aim obviously, but that carries the threat of death and the stink of power. He secures the food supplies and demands jewelry in exchange for it. Soon the jewelry runs out and the barter naturally turns to women.

No 1950’s coy rendition of courting, this is blunt, raw sex for food. No one in the wards – or the audience – questions how Bernal can keep track of the food, the riches or the bartered people, but we never question that a human would actually DO something as irrational and selfish as hold others to his bidding.

Danny Glover is Mr. Exposition, in the second act giving us the story of the blindness spreading and being immune to bureaucracy. Eventually, even the guards become blind and desert the facility.

Another psychological wound of humanity is exposed when Ruffalo complains that his wife has usurped his last vestiges of manhood by helping him wipe his arse; it is hard to think of her as his wife anymore. When a man is emasculated, even inadvertently, there is no more desire. When he is unaware Moore is watching, Ruffalo gets busy with someone closer to his newfound social strata, a blind Latina (Alice Braga). (Ruffalo is like that quiet type your mother warned you about – what an old dog!)

The strange truth is that being the only sighted person among the blind will slowly drive you insane; a myriad of reasons, not least because YOU have become alien. Moore is almost torn to shreds by blind foragers when she enters a supermarket to steal supplies.

BLINDNESS is about the journey, not the destination. By movie’s end, it has revealed all it needs to about the depressing, bestial baseness of the human animal. So simple to bring down a world; devastated by an apocalypse no one saw coming (is that a pun or a good joke?).

Adapted from the novel by José Saramago, directed by Fernando Meirelles in leached grays, we feel the claustrophobia, the frustration, the humiliation, the painful helplessness of suddenly losing one of our main faculties. A primal fear come to life.