When I saw THE BLOB as a young kid, it was terrifying. I didn’t care about the tepid acting, the simple, linear storyline, and especially didn’t notice any subtexts of Sex Equals Death, or Not All American Teen Hooligans Are Bad. And who the hell was Steve McQueen? 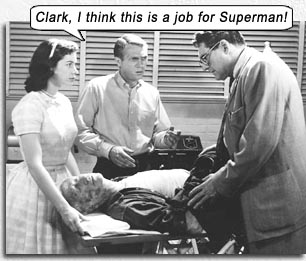 Now, well, the pulsing strawberry jelly representing the inexplicable entity from outer space looks like The Horror From Pepperidge Farm. And while somewhere, an acting coach is weeping inconsolably, the message of Not All Teens Are Bad can be embraced, considering the “teen” leader was the King Of Cool in his first starring role, 28-year-old Steve McQueen.

A meteorite plummets to Earth in the countryside; an old codger pokes at it and a gelatinous gloop covers his hand. “Teens” Steve (McQueen) and Jane (Aneta Corsaut, beyond bland) find the delirious old man when the gloop has overtaken his arm, and rush him to a doctor (Stephen Chase) who looks uncannily like George Reeves as Clark Kent. Unfortunately he ain’t no Superman and is swallowed by the blob after some menial overacting.

And in respect for his body of future work, we pretend we don’t notice young Mr. McQueen’s Acting School Terrified Look as he sees the doc get blobbed.

The growing blob of matter slimes around town under the cover of night, swallowing various extras and growing with each kill, while the town “teens” (Steve and his hooligan buddies, all dressed neatly in collared shirts and high pants) cook up dangerous stunts like driving backwards, sneaking out of their bedrooms at night, investigating an abandoned house and going to see a “spooky movie.” Those crazy kids!The special effects of the day are rudimentary, yet effective; though relying heavily on quick edits and process shots, director Irvin S. Yeaworth Jr. creates a very plausible horror with Bobby Blobby’s soundless subsuming of sweetmeats.

As hard as it may be to fear something with the texture of strawberry jam, THE BLOB could have been a truly terrifying thriller, rather than a breezy cult novelty, as the formless, mindless eponymous entity is never explained, and therefore scarier than any axe-murderer or scientific experiment gone awry. It was not consciously malevolent, just trying to find energy sources, although I know the simple-headed moviemakers were not trying to be that subtle, and painted it as a basic evil villain. We imagine but for cooler heads prevailing, they would have put a twirling mustache on it.

But the ominous tone is shunted aside to cater to the social mores of the day – the Teen Movement; the blob itself becomes merely a device for the Teens to overcome. THE WILD ONE (1953), REBEL WITHOUT A CAUSE (1955), DADDY-O (1958), THE REBEL SET (1959), THE BEATNIKS (1960) – the plots of these movies (and scores of others produced during this period) revolved around Wild Teens as the simultaneous outcasts and drivers of society. This synergy informs THE BLOB and its portrayal of mid-American society as a hapless bunch of inbreeds with Teens Saving The World.