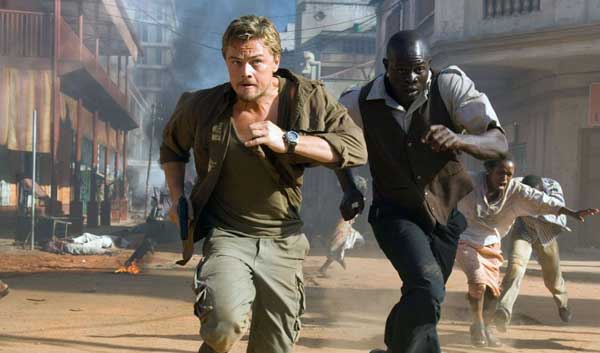 Ebony and Ivory. Living together in perfect harmony.

A Rough in the Diamond.

The greed of the human animal is such a compelling thing that even decrying that greed will only feed it. Such is the paradox facing Edward Zwick‘s powerful BLOOD DIAMOND, a movie set in the west African country of Sierra Leone in 1999, when Revolutionary United Front rebels took over the nation’s capital, using diamonds mined by slave labor as their civil war sledgehammer, to finance their war against the government.

Though it is against the horrors perpetrated by the rebels and their leveraging of “blood diamonds,” the movie recreates their atrocities so well that it will rake in millions on the depiction of those atrocities. Audiences have recently given Mel Gibson grief over the gratuitous bloodletting in his movies, yet when BLOOD DIAMOND blasts into a shattering killing euphoria every twenty minutes almost on cue, do those same critics hold their tongues because DIAMOND supposedly portrays a real conflict? 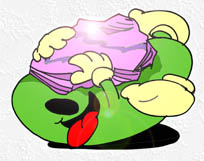 Written by Charles Leavitt and C. Gaby Mitchell, we are shown boys recruited by the RUF, armed with AK-47s, mindlessly blowing away citizens, we see arms being lopped off, sudden shootings in the head and wild slayings of innocents; knowledge of the Sierra Leone civil conflict might lend a context to the violence, but its acceptance as an ostensible necessary element in this movie says something about our violent species. Is Gibson’s violence gratuitous because it depicts societies far removed from our modern world, and is DIAMOND’s violence “noble” because it is just across the pond? Like Mel’s APOCALYPTO, we are witness to a people destroying themselves from within. Over greed.

Slinking beneath the radar of the turmoil is diamond smuggler, Danny Archer (Leonardo DiCaprio). For this role, Leo does what most women do who want to be taken seriously – women like George Michael, Ashton Kutcher and Joey Fatone – he grows a goatee. It doesn’t help. He’s still as pretty as sunset on the French Riviera. But he’s hard – the hardest he’s ever played: shooting down guerillas in cold blood, breaking necks, facing down gun-toting madmen, all in a shirt so grimy with his back-sweat that it probably brought a lunatic’s price on e-bay from some squealing tweener. In fact, he’s so hard that if they were to remake TITANIC today, he’d play the iceberg.Though his career performances have been consistently stellar, in burying himself in the role of this Rhodesian-born, white African, through a reasonably legit South African accent (and that badass goatee), for the first time, we lose the sense that we are watching a Movie Star; it could be just some guy pretty enough to be Leo DiCaprio.

Djimon Hounsou is Solomon Vandy, a fisherman whose teen son, Dia (Kagiso Kuypers), is kidnapped and brainwashed by the rebels, a la Patty Hearst. While Dia is trained to smoke, drink and mow down villagers every bit as mindlessly as a good ole U.S. Marine, Solomon is enslaved by the rebels to dig for diamonds, one day unearthing a pink rock the size of Freedom. He manages to hide it and escape.

In true mercenary style, Archer hooks up with Solomon, promising to help retrieve Solomon’s son in return for a part of the diamond. (In an unintentionally funny scene, skinny whiteboy Leo asserts he will set the pace cross-country – with a mandingo like Djimon at his side.) Archer brings along smart-mouth American journalist, Maddy Bowen (Jennifer Connelly – blessed with the scriptwriter’s snappy repartee that no female ever employs in real life), who is also a merc, offering to help them in return for Archer providing her vital black market info that will make her exposé on blood diamonds pop. So she has no call to give Archer a contemptuous look when she discovers why he is helping Solomon – but in true Female Double Standard idiom, we are meant to forgive Maddy her merc intentions for her doe eyes and half-exposed teats.

Still, though both start out as mercs, Maddy and Archer’s characters eventually bow down to the god of Hollywood Character Arcs, both finding their inner Oprahs before the credits roll.

Keeping the lovebirds apart in the final few minutes, the film might have retained even more cred had it not made them so goddammed HONORABLE. We humans are a gruesome, violent species – watch the screaming satisfaction of Solomon smashing a shovel over his slaver’s head. More than a few people enjoyed that scene with their hands down their pants, me included.

During boardroom scenes (populated by suits pretending concern for the blood spilled over illicit diamonds) we learn of The Kimberley Process, a joint government and diamond industry initiative working to staunch the flow of “conflict diamonds.” But who’s buying this lip service? There is greed up and down the ladder, from the CEOs to the governments, to the rebels and precious stone customers. Archer even outlines quite succinctly how the flow of diamonds through the marketplace is controlled by LEGITIMATE sources to retain the perception of rarity and preciousness.

And though the movie is supposedly an indictment against this black market bingo, I doubt Leo’s goatee, Jennifer’s teats or Djimon’s mandingo will influence real world buyers into only purchasing “conflict-free” gems.

Trying to blow the lid off the illicit diamond trade, Maddy asserts, “People back home wouldn’t buy a ring if they knew it was gonna cost a hand.” Wrong. The type of people who insist on diamonds as presents, who think nothing of terrorizing a man into surrendering three months’ salary to placate them with trinkets, hail from a sickly society whose voracious greed ensures blindness regarding methods of procurement. Besides their industrial abrasive and conductivity properties, diamonds are non-utilitarian status symbols, in the general community only serving to make her bleary-eyed and open-thighed upon receipt.

Guess that’s all the utility we need.