The very plot of THE BLUE LAGOON makes it a movie that can never be fully realized as entertainment or as the thought experiment it was conceived to be in the 1903 novel by Henry De Vere Stacpoole: two young kids stranded on a desert island must learn to live with nature, each other, and avoid the headhunters from GILLIGAN’S ISLAND on the opposite shore. 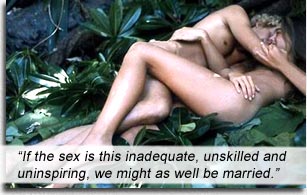 They swim naked, they bicker, they eat, build a hut inspired by the best work of The Professor and eventually have The Sex and spawn a baby. Uhm… let’s get back to that “sex” part again…

Since BLUE LAGOON was a general release (oh, don’t say ‘release’ – please!) it had to comply with censorship regulations, so the realism of arbitrary nudity is lost immediately. (These kids live on a beach yet spend more time with their clothes on than off). That aspect being lost, the film could now only concentrate on the other thought experiment threads, such as the stunted development of the kids’ language and world knowledge.

This is done minimally but interestingly: Em (Brooke Shields) and Richard (Christopher Atkins) can only sing snatches (oh, don’t say ‘snatch’!) of christmas carols; they are not imbeciles, yet since third grade they have not been taught anything new or been exposed to other people, so their language is basic; his prayers interchange words from The Lord’s Prayer and the Pledge of Allegiance; their superstitions about god are simplistic. Yet after all is said and done – matter of fact, while it is being said and done – all we can think of (as animals built to procreate, whether the censors believe that or not) is getting out the coconuts and clams.

The notion that a film about two naked youngsters growing up on a tropical paradise and having it be about anything BUT sex is ludicrous. Ironically, those humans who consider Nature’s course as prurient or perverse – are the deviants.

So though the film is a constant tumescent promise of sex between two teen models, due to the actual perversity of the censors (in stultifying Nature) it cannot possibly deliver on any level that would satisfy (oh, don’t say ‘satisfy’!) its target audience of 15-year-old boys with unbidden rock hard… imaginations.

Of which I was one. Though it may seem like a joke, “imagination” is the bane of the censors, for they can stultify all they want, but we would still take from the film the fantasies for future bathroom visits. All I remember of this period in my life (oh! Don’t say ‘period’!) is discussing this movie’s merits rapturously with my friends – how at certain angles one could actually see “bush” and “bosoms”! I imagine the mirror version of our lascivious critique was taking place in the girls’ camp (yes, tweens, lots of bare-butt blond Christopher and many underwater shots of swimming penis).

And that’s about it for the merits. Besides the luxurious cinematography of the tropical isle, the distracted focus of this movie is on how the two kids actually get around to “doing it” – without the education of society or the taunting of peers or the knowledge of what doing it might result in, i.e. a high maintenance girlfriend. How would they come to the realization that to satiate their groaning loins they would eventually have to perform a natural act that has been painted as “unnatural” in civilized society?

And thus are we bored to tears with red herring foreplay, unimaginative acting, dark angles and pasting Brooke Shields’s hair over her flat chest like it’s something fantastic that has to be guarded by Green Lantern.

After a few years on the island (while a guy who looks like Samuel Clemens sails the seas with a telescope and a lawn chair seeking them) the teens arc from desperately wanting to leave the island to enjoying their isolated idyll with their baby. (Richard asks, “Why did you have a baby, Em?” “I don’t know,” which is one of the interesting thought experiment elements: how would kids equate sexual intercourse with babies if they are never told and have no peers to compare sex-to-birth causalities?)

Thirty years after seeing THE BLUE LAGOON I would discover it was a remake of a 1949 movie starring Jean Simmons. If the 1980 version is so Victorian in its begrudging angles and snatches of body-double breast, I shudder to imagine the prudishness of that earlier movie. Let me guess: 20-somethings playing teens, soft-focus closeups, flesh-crawling “romance” where there should be animalistic discovery of sexual intercourse, the “teens” supposedly “falling in love” before they actually have sex… and erogenous zones as judiciously eradicated as in the 1980 remake to stultify prurience in the 15-year-old boys of the day.

So many viewers of the 1949 film laud it as a classic because they were youngsters when they first saw it. Well, I first saw the 1980 version when I was but a teen masturbatory machine yet at no point in my life did I ever consider it some kind of classic. Personally, I’d subtitle it BALLS OF FURY.