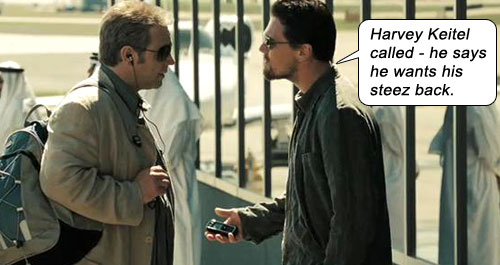 Little Boy Leo is now Big Bad DiCaprio. In BODY OF LIES, Leo has finished growing the beard he started in BLOOD DIAMOND and is neck deep in Syriana. He is undercover CIA operative Ferris, stationed in the Middle East, embroiled in an undercover plot to plant a Taliban newbie as a rising demagogue, in order to flush out the real head of al Qaeda.

As if the head of al Qaeda would take such petty bait. Lucky for this movie, he does…

Ferris’s Stateside liaison is Ed Hoffman (Russell Crowe), wedded in matrimonial bliss to his Blue Tooth, so callously inured to his job (some sort of CIA facilitator) that while Ferris is mired in the Middle East, telling him of having to shoot an informant in the head, Hoffman is casually helping his little son with the toilet; while Ferris yells from Pakistan, “Fuck you!” at Hoffman for betraying him, Hoffman is dropping his daughter off at school. Not a whit of emotion crosses Hoffman’s face, his family oblivious to his odious dealings.

Hoffman’s opening monologue succinctly describes why American forces find it so hard to overcome al Qaeda: “They use old world techniques. They realize they are fighting men from the future – so if they throw away their cell phones, close down all their computer communications, there is no way to trace them.”

Media on both sides of this movie has substantiated that insight. Gene Hackman says in ENEMY OF THE STATE (1998), “The more technology you use, the easier it is for them to keep tabs on you.” And in the real world of July 2009, captured American soldier Bowe Bergdahl verifies: “While the Americans are hiding behind their technology, the Afghans are fighting with just a shirt and an AK-47 and that’s what makes them stronger.”

An Arab businessman (Mark Strong, in a powerful role) aids the CIA’s quest; an Iraqi woman (Golshifteh Farahan) is inserted sideways into the plot as a love interest for Leo; and in the film’s unintentionally funniest moment, an Arab mutters in prayer just before he blows himself up, “Bismillah!”— (Noooo! We will not let you go! Let him goooo! Bis-MILL-ah! We will not let you go!—)

Written by William Monahan and David Ignatius, directed by Ridley Scott (GLADIATOR, 2000), BODY OF LIES is one of those movies that once again makes the Amerikan Military look more powerful than it really is – absolute omniscient ubiquity in surveillance (yet – Osama who?). Though the film outlines all the geopolitical problems at the outset, all it takes is two hunky Americans to put it past the towelheads and almost win the War on Terror.

And make no mistake: this movie would not have come into existence were it not for the “Bush War on Terror.” Both Leo’s ruthless inside man and Crowe’s stolid bureaucrat would not be sellable had not the Ku Bush Klan already “sold” the necessity of their fake war. And in the acceptance of the war, the acceptance of the despicable things these characters do – and yet painted as “heroes” because they are the whiteboy Amurrricans.

Ferris is involved in a torture where the victim dies. He is unflinching. He promises asylum to an informant, yet when that informant is captured, Ferris thinks nothing of casually putting a bullet in the informant’s head so that the informant cannot give up the CIA; he speaks fluent Arabic, he is ruthless, unmerciful. While Hoffman will use, abuse and betray anyone at his disposal to further CIA agenda; including using and betraying Ferris when convenient.

Even the overarching plot in BODY OF LIES is ultimately a contemptible murder conspiracy – to kill the al Qaeda leader without any trial or evidence. Which Geneva Convention said that was okay? To paraphrase Satan’s Vagina Nixon, the criminal Bush-Cheney administration have coerced the world into believing, “If America does it, it’s not illegal.”

For those who wonder how Bush’s criminality has affected America, heed well the words of the al Qaeda leader just before he hammers Ferris’s fingers: “Welcome to Guantanamo!”

Scaramouche! Scaramouche! Will you do the fan-dan-go?! Thunderbolts and light-ning, very very fright-ning me! The REAL Body of Lies is the War on Terror itself.