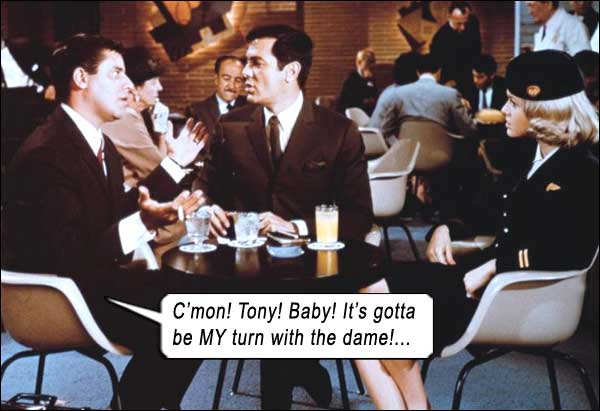 Laughing all the way to the skank.

A sex-comedy with no sex and very little comedy.

Tony Curtis is an American philandering bachelor living in France, who keeps three airline stewardesses on a string, each thinking they are his fiancé. With their worldwide flying schedules, they are never in town at the same time, so through the simple practice of changing their mantle pictures and their underwear drawer, he keeps these simpletons believing that each is “the one and only.”

Jerry Lewis is Curtis’s friend who discovers his secret and plays along, helping Curtis keep the three bims separated. Curtis’s housekeeper, grouchy Thelma Ritter (old as a redwood and twice as gnarly), is in cahoots with him also – disapprovingly, mind you – providing those snare-hit vaudeville punchlines for the blondies carouseling through the apartment. 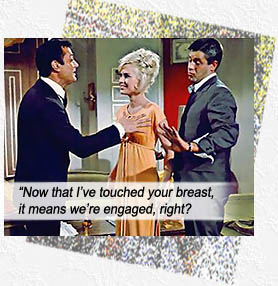 This is one of those farces where people speak fast and loud to desperately create comedic situations. But comedy is culled from real-life situations gone awry, and when characters don’t in the least behave “realistically,” the harder it gets to cull the comedy. The less realistically the characters react to their increasingly-ridiculous situations, the less comedy, the more “forced” the farce.

And after all the skulking around, we discover that each girl has a separate bedroom anyway! They aren’t even sleeping with him! So after the movie pumps itself with sexual innuendo, telling us this guy is so amoral, we find these shallow skanks are not even sleeping with him in what is supposedly “their” home.

And one of the girls – after spending five minutes in a cab with Lewis – falls for him. Some kinda fiancé!

And the big reveal – all three girls discovering each other in the same room, with Curtis and Lewis stuttering their way through explanations – is infuriating. If grown women being portrayed as slightly retarded is funny, then it’s hilarious.

Actually, Jerry Lewis does a great job as a semi-straight man and provides a few mild laughs. But on the whole, the social mores of 1965 really put a damper on this supposed comedy, in this age of women dressing and behaving like whores, from pop star supersluts all the way down to the average soccer mom.