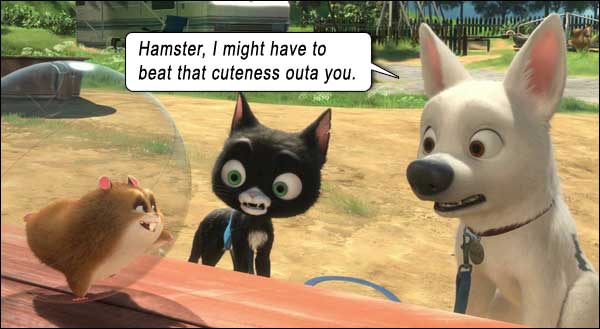 If cuteness ever becomes a sin, this movie is going straight to hell.

BOLT (voiced by John Travolta) is a little white puppy that was raised from birth as a superdog. Well, he’s not really a superdog – but HE doesn’t know that. For the sake of realistic reactions from Bolt, the producers of his weekly television show (where he plays a superdog) don’t let him know it is all make-believe.

In one episode, Bolt’s “person,” Penny (Miley Cyrus), is kidnapped by the villain of the show (Malcolm McDowell) in a cliffhanger ending, with Bolt about to thwart the villain. The director yells “Cut!” the cameras stop rolling, and Bolt’s handler nabs him mid-thwart and shoves him into his doggy-carrier. Bolt, thinking Penny is still in mortal danger, breaks out of his trailer – and is immediately accidentally mailed to New York. Thus begins his cross country journey back home, on “rescue mission.”

Along the way, he meets a cat named Mittens (Susie Essman), whom he takes hostage, and a crazed fan hamster, Rhino (Mark Watson), who watches Bolt’s TV show and idolizes him, craving the action life that Bolt supposedly leads, “Let it begin! Let it begin!”

The inconsistent aspect of this fantasy is Bolt thinking his insane stunts are real (leaping over helicopters, holding cars in his teeth, his super bark that stops charging traffic, etc.) when we all know that all those elements of a show are produced in post. I mean, Bolt is not really jumping over spinning chopper blades – is he? He’s jumping in the studio and they’re inserting the chopper visual in post. So why does he think he’s jumping over a chopper – unless he is viewing the finished edit? And even then, shouldn’t he remember that he never really jumped over a chopper? I mean, he’s not really holding a car over a railing with his teeth, is he?! Because all those visuals would be completed after the acting job. So why does he think he is holding a car? What is substituting as a car in his reality – a tiny green fluffy toy? Because we all know that’s how movies are made. I can understand if the cat and the hamster thought Bolt’s powers were real and he tried to disabuse them of that fantasy, but for him to believe he really is super makes him kinda super-stupid.

Over his journey, through the cynicism of Mittens and the physics of reality, Bolt has to come to grip with the fact he is not super, and that he is replaceable on the show; he sees that all it takes is the simple painting of a lightning bolt on the white fur of his substitute. Consequently, tear-jerking reunion and redemption clichés just waiting for their cue, replete with orchestra swell. And more cuteness.

Excellent animation, lots of Hollywood insider gags (James Lipton as The Director, Greg Germann as The Agent, the pigeons pitching episode ideas) and much too much too much cuteness.