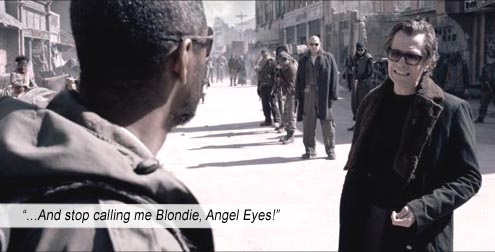 When Gunslingers Get Religion.

Comes a time when you’re just sick of the descriptor “post-apocalyptic.” What happened to simply, “The Near Future” and letting our imaginations extrapolate on what blasted the hell out of Middle America? (Could it have been those religious fanatics with the Weapons of Mass Destruction – you know, the American government?)

So in THE BOOK OF ELI, striding down the heat-blasted, Middle American – ahem – “post-apocalyptic” highway comes Eli (strapping, sexy-55 Denzel Washington), looking like A BOY AND HIS DOG – without the dog; looking like THE POSTMAN – without the mail; looking like BEYOND THUNDERDOME – without the mullet. He’s handy with a gun, and a knife, and his fists, and a bow and arrow, and quoting from the Bible – probably the most dangerous weapon of all. 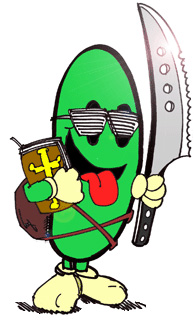 My Pointy Faith protects me!

He carries with him the last of those weapons. The last copy on Earth. The King James. He is heading west, on some quest to deliver it unto… even he is not sure himself. And any thugs who accidentally wander in from THE ROAD WARRIOR costuming department and try to mug him for food and water are dispatched efficiently by Eli’s arm-sized knife and effortless Denzel Kwon Do.Eli encounters a blasted township, meets a grizzled Tom Waits (excuse me – that’s tautologous), and an ominous Gary Oldman (once again – tautology) who runs the town like Tina Turner.

Oldman is bibliophile Carnegie (who once again scares us deliciously without chewing scenery), whose thugs scour the highways, raping and pillaging for One Particular Book. Yes fans, the Book that Eli carries. Dipping into his boundless bag of accents, Oldman gives us the unlikely Regis-Philbin-as-a-Despot accent. He is reading about Mussolini when we meet him.

And he wants that Bible. For the original intended purpose those high priests penned it thousands of years ago and pretended it was The Word of God: “It is a weapon aimed at the hearts and minds of the weak!”; to emplace himself as the Keeper of The Word and enforce it as he sees fit, selectively recalling passages as the circumstances denote and ignoring others. As people have been doing for centuries. As people are doing right now.

In a surprising display of controlled storytelling by Gary Whitta, THE BOOK OF ELI is about religion – but it ain’t religious.

In some ways it can be regarded as the triumph of intelligence over organized religion – for only the two learned men, Eli and Carnegie, understand the potency and implications of wielding a Bible. In this story’s context the Bible is merely a McGuffin. The intelligent men battle over possession of it because they both know how to wield it to their own ends – one for peace, one for domination. (Peace and domination – the unspoken dichotomy of every organized religion since civilization’s roots.) And when we see it in this context, we realize The Book is irrelevant, moot, unimportant, and it is PEOPLE who make the policy all along – good people will make good policy; evil people, evil policy.

Eli even ponders, “Some people said it caused the war in the first place.” I’ll bet a kajillion dollars it did. So at times we cannot understand how an intelligent, skilled warrior like Eli would be so intent on dusting off the radiation and giving it another go. 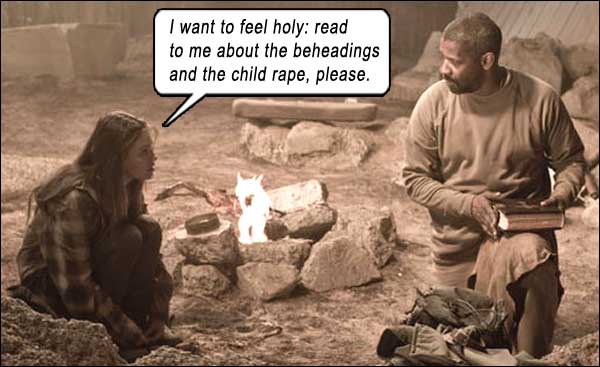 THE BOOK OF ELI is beautiful to behold; charred dustbowls, ochre craters, seared red-tinted highways and heat-whitened bone-dry riverbeds. It’s like a black and white Photoshop image with the Color Balance tool turned up slightly on the Red. Add Noise. Sharpen. Sit under a scorching salmon desert sky without undies.

Can you feel me now?

Heavy Leone influences drive the film’s gutshock action. Directors Albert and Allen Hughes love the stinking, sweat-driven closeup; the gathering of assailants before the Eastwood-ian avenger takes them all down; the hero wavering in the desert haze – like Eastwood’s HIGH PLAINS DRIFTER (which Clint copped from Leone). It’s a western. About a guy heading west.

Jennifer Beals is Carnegie’s blind wife. Ray Stevenson is Redridge, Carnegie’s right-hand man (who keeps whistling the pan flute theme from ONCE UPON A TIME IN AMERICA – reason unknown). Mila (mini-Jolie) Kunis is Carnegie’s step-daughter, who joins Eli on his quest – more like attaches herself to him like a wild leech which forces the film to give her character some kind of resolution and waste our time.

Eli tells her he heard a “voice calling him” which led him to The Book buried under some rubble… You sure that’s a Bible and not the Golden Plates of Mormon that the angel Moroni buried?

It’s a giant TALES OF THE UNEXPECTED episode. One of those movies that – in its last few minutes – starts you thinking back on the whole film and the hero’s actions. The last ten minutes are brilliantly unveiled. Take that, M. Night!

When Carnegie sleazily entreats Eli, “The Bible is meant to be shared,” he’s right. Isn’t he, Christians? Shouldn’t Eli be staying where the Bible is needed most – in this den of thieves and harlots? Like the bracelet says, What Would Frank Do?

• In Eli’s room at Carnegie’s den, there is a wrecked poster on the wall for A BOY AND HIS DOG, the classic 1975 post-apoc film, penned by master fantasist Harlan Ellison.

• When Carnegie’s henchies throw a pile of books on the table for his review, The Da Vinci Code is among them.

• When Eli is shot in the stomach, he reaches for the gaff tape to bandage the wound – as any musician will attest, gaff is better than medicines, doctors, stitches, antiseptics – it’s The Universal Solvent.