In the name of the father – Peckinpah – and in the spirit of Tarantino. THE BOONDOCK SAINTS is like Sam and Quentin had a baby that hasn’t learned to walk yet. 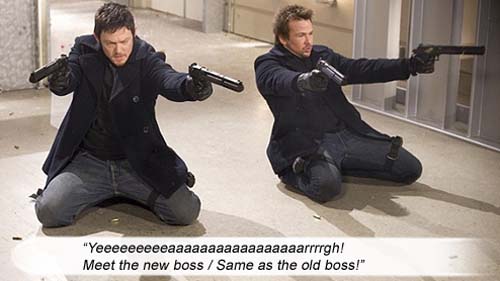 It’s a cult classic because it’s powerful and visceral: two Irish Boston prettyboys go vigilante vocation on the Russian mob, all broguey justice and hero angles. On a mission from their vengeful God. Pursued by a gay detective who falls under their pretty-eyed, holy bullet spell.

Sean Patrick Flanery and Norman Reedus are brothers Connor and Murphy MacManus, who kill a couple of Russian mobsters in self-defense, incorporating a toilet hurled from a roof with bloodied handcuffs and a Geronimo leap of faith to stop an execution in an alley – an opening scene so audacious and boldly directed, it has us believing that BOONDOCK will surpass its predecessors in creative carnage.

Writer-director Troy Duffy still retains some interesting ideas and staging, all copped quite blatantly from his mentors: he shows us events out of chronological order (the crime scene first, with Smecker describing the events, then the crime taking place) – Tarantino wept; slow motion gun battles – Woo grimaces; blood spurting in glorious gouts – Peckinpah laughs; hard-cut action sequences underscored by blazing rock music – Guy Ritchie pukes in his mouth; the brothers recite a prayer before gunning down mobsters – Jules Winfield and Vincent Vega have a Royale with Cheese and a Big Kahuna Burger in simpatico).

“And shepherds we shall be
For Thee, my Lord, for Thee.
Power hath descended forth from Thy hand
That feet may swiftly carry out Thy command.
So we shall flow a river forth to Thee
And teeming with souls shall it ever be.
In nomine patri, et fili, spiritus sancti.”

Killing in the name of the Lord. How saintly. Long before guns were invented; long before the faux-holy men who drunkenly penned bibles and korans.

Then there is all the bad staging. For instance, Smecker makes the confession that even though he is sworn to uphold the law, he thinks the vigilantes are righteous – in a real confessional box. The irony of this scene is diluted by the priest being held at gunpoint, and another man holding the gunman at gunpoint. In the context of the story, not only does it make no sense, its inclusion in the story flow is jarring, and only contrived because director Murphy must have been on the John Woo page of Directing for Dummies.

Now this whole emgalla might have still remained an entertaining experiment in violence comme art, if it weren’t for untalented David Della Rocco as village idiot Rocco, the brothers’ street friend who joins them on hits. Rocco is a useless, overacting juggernaut, who, like a bad tennis player, brings everyone else down to his level; conspicuously the weakest link in the cast, unlikeable, unwatchable and unfunny (even though his nom de plume is “funnyman”); either stop shouting so much or go do a movie with McG.

The neighborhood calls them saints. The mob calls in Il Duce (The Duke), a Hannibal Lecter-type hitman so dangerous he’s a comedian – Billy Connolly, who brings his Wire Brush and Dettol to the gunfight.

BOONDOCK is an uncomfortable mixture of adequate writing coupled with pockets of alternately brilliant and sophomoric direction, trying for the arty violence of LOCK, STOCK AND TWO SMOKING BARRELS or BANGKOK DANGEROUS, but in the final telling is just Guy Ritchie being punched in the face by Uwe Boll.