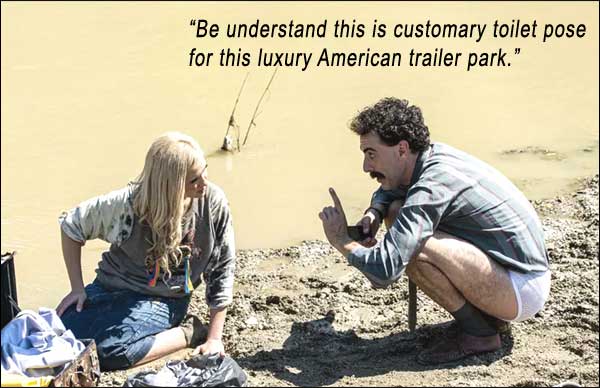 For Make Benefit of US&A.

I was terrified that if Trump got in again, that America would be a democracy in name only… I felt very clearly from the start of the last administration that we were heading towards authoritarianism. And so I felt I had to do something.
— Sacha Baron Cohen

The moral of this story: You fuck with democracy – Borat gonna choke a bitch.

Dumbo donald made him do it. Sacha Baron Cohen really didn’t want to make another Borat, so this is not a venal studio cash-grab. As much as this Borat “sequel” is a raunchy comedy, its very existence is political. From his own account, Cohen was driven to undermine the election campaign of the psychotic dumbo donald administration, to avoid another term of the traitorous malignant felon.

Thus: BORAT SUBSEQUENT MOVIEFILM: DELIVERY OF PRODIGIOUS BRIBE TO AMERICAN REGIME FOR MAKE BENEFIT ONCE GLORIOUS NATION OF KAZAKHSTAN. And the result? Borat: 1. dumbo donald: 0. Whether Cohen’s film was instrumental in dumbo’s election loss is conjecture, but hey – the piece of dogshit traitor lost! – do we give a rat’s ass how or why?

Before the film starts – in the content warning (y’know, Nudity, Violence, etc) – there’s a warning for blackface now. And it’s first: blackface, nudity, drug use, violence, foul language, sexual content. Justin Trudeau say, “Who, me?” Yeh, we all know it’s inappropriate – it’s being used here as a punchline. By the way – they forgot bestiality (movie shows a video cover of an ape porno star with human women) – must I do your contradictory job for you, Censors? But I can’t believe the slippery slope we’re on right now. It’s not the filmmakers’ fault – they’re making a political satire – but how long before the censors, bowing to the vocal minority of the Kancel Kulture Klub, are gonna post warnings for transphobic content (anything with BRUCE Jenner), insensitive to catholics (SNL’s Djesus Uncrossed, anyone?), and cis-gender toys? (oh, MR Potato Head, where art thou?) 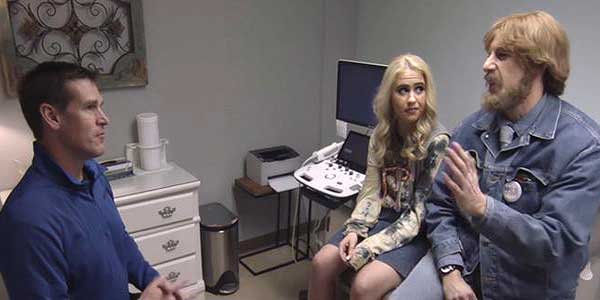 Evangelical pastor listens to a father describe how he impregnated his daughter. Just your average day for this pastor and his flock.

Due to his feral daughter Tutar (Maria Bakalova) stowing away onboard the ship and eating the monkey, Borat instead uses her as the gift. Since he can’t get close to dumbo donald, he opts to deliver her to Closet Pence, who was “known to be such a pussyhound that he could not be left alone in a room with the womans.”

In this sequel, 14 years after the original BORAT, Cohen faces the reality of Borat being recognizable worldwide, so he artfully builds into the plot that Borat is a worldwide phenomenon, meaning that Borat himself (who is Cohen in disguise) must also adopt disguises! (Like Robert Downey Jr. in TROPIC THUNDER: “I’m a dude playin’ a dude disguised as another dude!”) That’s not exactly a good thing for the viewer because it removes that visual branding for long periods of time, and sometimes it seems like we’re watching WHO IS AMERICA?, Cohen’s revealing 2018 series that also employed various disguises on Cohen as he hammered out xenophobes, white supremacists and dingbats. 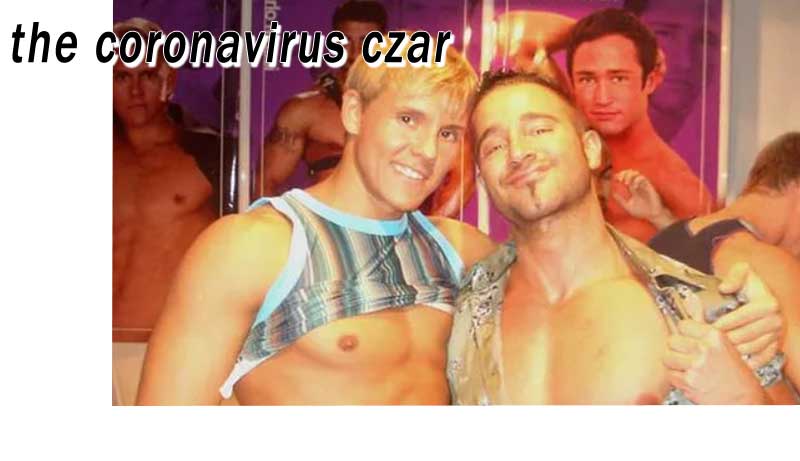 Vice President Closet Pence takes the stage and spews an overflowing gutter of contempt for his listeners and for America. It’s an embarrassment to think this guy was in charge of quelling the pandemic – the coronavirus CZAR, no less – instead, brazenly spreading lies: “As of today, we have 15 cases of coronavirus that have been detected in the United States with only one new case detected in the last two weeks.” There’s nothing particularly xenophobic or dingbat about this sequence – except the craziness of Cohen taking his life into his hands with all those itchy Secret Service goons around – except for the fact the filmmakers have recorded the administration’s talking points via Pence, talking points that we now know even the administration knew were outright lies, proven by dumbo donald’s recorded conversation with journalist Bob Woodward, where he admitted to knowingly lying to America. Pence continues the malignant killing words: “While the risk to the American public remains low, as the president said yesterday, we are ready for anything.” Hmph, ‘ready for anything.’ The families of over half a million dead Americans beg to differ, you oleaginous swine.

Borat as dumbo donald bursts in, Tutar over his shoulder, yelling that she is Pence’s gift. The Secret Service “escort” Borat out, refraining from beating the shit out of him because of the ubiquitous cameras, and refraining from shooting him because he isn’t black. If that smug closet cock-holster only knew how Borat retroactively exposed the apex of criminality with his talking points, he would have instructed his big sexy men to have done BOTH. 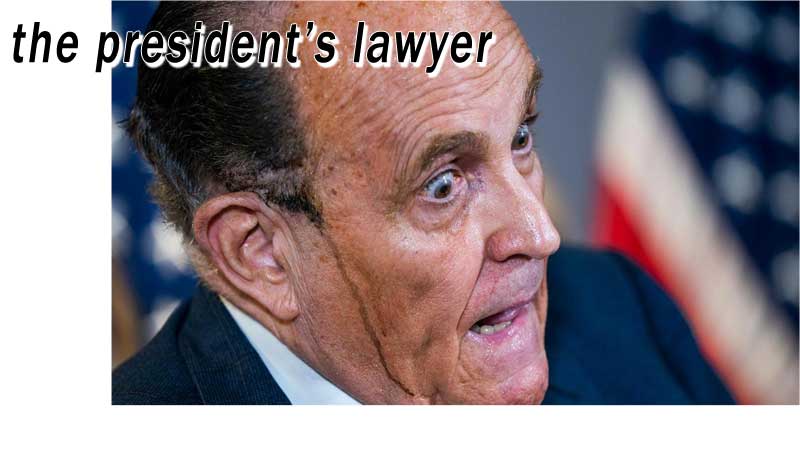 Is the movie as a whole ethical? Yes. We did it because there was a deeply unethical government in power, and there was no question as to– we had to do what we could to inspire people to vote, and remind people of the morality of the government.
— Sacha Baron Cohen

Political commentator Cenk Uygur described WHO IS AMERICA as “funny, but it crosses over to macabre…” – and this is exactly what happens in Rudy Giuliani’s entrapment. Let me first mention “the girlfriend voice” – that effeminate, obsequious tone that men adopt with their girlfriends or girls they are trying to score. We all know we use it, and we all hate ourselves for it. And THAT’S the voice Rudy is using here – with Tutar posing as an interviewer, openly flirting with Giuliani to achieve this… rise in him…At first, we’re laughing – because it looks pathetic. But then Rudy moves in for the kill, with white privilege misogyny and molestation, as he gropes Tutar’s neck and hips and lays back on the bed to stroke his tumescent penis into impressive erection for the hot chick – or at least, try to, at his age, thoughts of, “When did I last pop that Cialis and will it still be in my system?” going anxiously through his head – there, I said it. Everyone’s been dancing around the issue of what Rudy is doing – HE maintains he was “tucking in his shirt” after Tutar took his mic off; news programs use euphemisms like, “puts his hand down his pants” – but they’re all adults, and none of them are virgins – all pretending they don’t know exactly every nuance of this sexual interaction.

But lemme tell ya: Rudy’s not embarrassed with the hands-down-pants moment – nah, he knows that guys are impressed with the fact he is going for it – what fills Rudy with humiliation till his dying day is that up till now, only a few women have heard his GIRLFRIEND VOICE, when he’s begging them to marry him or when he’s molesting them in a hallway, and now we ALL get to hear it… 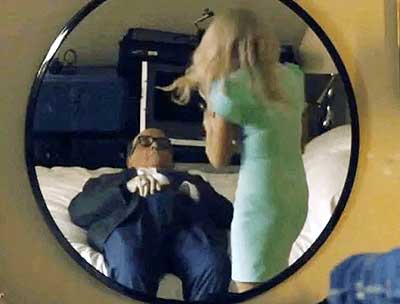 Now – there’s certainly no crime in trying to get laid, whether you’re married or not, and we have to admit that Cohen and Bakalova led Rudy by the nose-ring into this compromising situation – what makes this so repulsive is that Giuliani was meant to be conducting a professional interview and he was coerced so easily into this trap – not “getting” fucked, but being fucked; also, Giuliani’s political party gasbags about family values – and every one of their hypocrite leaders molest everything within groping distance. Hmm, I wonder what Rudy’s girlfriend, Maria Ryan thinks of Rudy “tucking in his shirt”? But then – who gives a shit what she thinks?! This hospital CEO was on Rudy’s radio show in May 2020 touting the benefits of hydroxychloroquine as treatment for Covid. Again, she’s a HOSPITAL CEO. And she’s actively getting people killed! FUCK this malignant cow! And fuck their sham transactional relationship!

Borat bursts in, shouting, “Put down your chram! She fifteen – she too old for you! She my daughter. Please take me instead! Take my anus!” (And we hear just how good Bakalova is at improv: in the confusion of imploring Rudy to fuck them, Cohen proclaims, “My back pussy very tight!…” and Bakalova, without missing a beat, “No please, my front anus…”)

This story hit the news cycle on the day that Rudy was meant to be promoting the presidential debate; and instead, Borat had Rudy against the ropes, defending himself against A POTENTIAL STATUTORY RAPE. 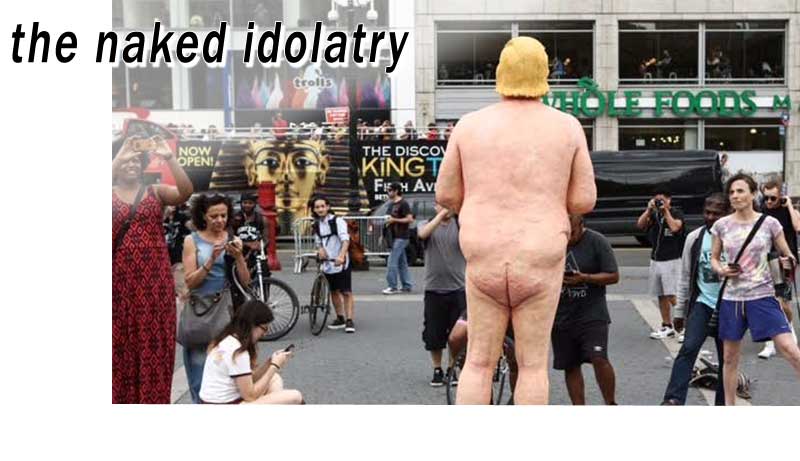 Dumbo donald lost the election (about 80 times at last count – in the courts, in recounts, the popular vote, the electoral college) truly the BIGGEST LOSER of any president in US history. Released before the election, this movie spares us the tragicomic scenes of dumbo’s apostles, in and out of government, refusing to believe he lost.

We made the movie to have an impact on the election.
— Sacha Baron Cohen

What SUBSEQUENT MOVIEFILM does do, via Borat’s travels, is expose the deleterious effects of the dumbo administration on redneckian society; Borat asks a cake shop owner to write “Jews will not replace us” in icing – she gladly does; he leads a gun rally crowd effortlessly into racist chants; two trailer park twits mansplain the Democrat process of harvesting adrenalin from kids, never realizing the irony of calling Borat’s propaganda book on Kazakh marriage a conspiracy theory. Jesus, it’s blood-curdling how tiny their brains are. Who knows where they read these idiocies, considering they can’t read?

The movie is written so well that it can frame two subplots – Tutar realizing she can be an independent woman, and Borat, raised as a misogynist, realizing he can reciprocate his daughter’s love. And 24-year-old Maria Bakalova is sensational as 15-year-old Tutar, proving she can improvise in life-threatening situations alongside the best in the business.

BORAT SUBSEQUENT MOVIEFILM exposes the fraud and fragile minds of the dumbo donald administration and its followers, and it must count as partially responsible for removing the money-laundering, campaign-finance violating, kidnapping, obstructor of justice traitor seditionist amoral pig from office. The movie title actually changes along Borat’s journey, as his goals change, but in the end, BORAT SUBSEQUENT MOVIEFILM was made For Make Benefit Once Glorious Nation of US&A.