For Make Laugh on Jew and Retard.

This movie is retard. Either or audience is retard for not stop laughing.

Never has been a movie exposing more people so red of neck or so mong of loid. We may see these stereo of type in your AMERICA UNDERCOVER, your 60 MINUTES or your THE JERRY SPRINGER SHOW, but here compendium of bigots, ass-faces and rapists not only from working class, but bourgeoisie alike. 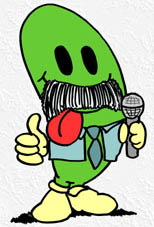 Storyline of BORAT is – how you say? – incidental – and more like excuse for get movie funding than actual script; could have been written on back of napkin, like plans to glorious Kazakhstan City Square. Borat’s quest: to woo the Pamela Anderson from the BAYWATCH and have sexy times in her “red water panties” then take back to Kazakhstan as wife. Crossing America in ice cream van with producer and suspicious friend, Azamat (Ken Davitian) is thread that join disparate – how you say? – vignettes.

Sacha Baron Cohen (who play Borat Sagdiyev), like Ashlee Simpson, Britney Spears, Paris Hilton, Richard Nixon and George W. Bush, has lack of “shame” gene, but unlike other moronis, his put genetic deficiency to good use in BORAT, as eponymous Kazakhstan tv reporter, who, through him apparent ingenuousness and ignorance of America way of life, tease out the black side of Americans they keep to hidden even from themselves.

An expert on obfuscating people’s rhythm (big word for me – rhythm), Cohen pushes boundaries as well as he pushes buttons: as soon as upper class lady mention that “it won’t take too much to learn Borat to American way of life,” he turn up at dinner table with bag of shit, asking what to do; at television station, WAPT 16 News, Borat (being television performer Cohen himself) know exactly how to throw the small-town television newscaster, standing up out of frame and continuing speak to newscaster, then butting into weatherman’s forecast on air; a “Humor Expert” decrees Borat’s story of incest between his retard brother and prostitute sister taunting him with her “vagine” would not be considered funny in the America – yet here it is – being funny in the America.

Leading the witnesses into unintentional foot-in-mouth on racism, jingoism, sexism and homophobe, Borat’s biggest target are the Jews, the gag being that Sacha Baron Cohen is, of course, a Jew. In gun store, Borat ask owner, “What is best gun to kill Jew?” And owner, whether not understand question or simply too red of neck to care, answer sincerely.When Borat meet frat boys in trailer, one Nazi-shorn whiteboy stood out as biggest loud-mouth, jingoistic, sexist troglodyte. He so brash and fearless about his neanderthalism that envision only one career path for him after college – United States Marine. 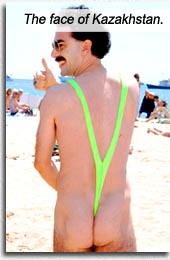 Direct by Larry Charles (SEINFELD, CURB YOUR ENTHUSIASM), laughs come thick and fast and dirty (morbidly obese Azamat pushing naked balls onto face of Borat in position of 69, head is hurting from laugh of insane), but there is horrifying subtext that Cohen has exposed with BORAT and could have not come at a more serendipitous time – on heels of this movie that show real racism as comedic, in grandest irony, a real racist show he is anything but comedic. Two words: Kramer. Nigger. Michael Richards, of most famous your SEINFELD, while onstage at comedy club, call heckler “nigger.” In 2006. In jest? Never a truer word…

Despite media having the thrive on euphemisms as “n-word,” “f-you,” and “a-hole” (as if replacing “nigger,” “fuck you” and “asshole” actually negate racism and swearing), BORAT’s success may be due, oddly enough, to American Kramer Gene: racism is alive and well in good ole Yew Ess Ov Ay – for by promulgating the euphemisms, the bile is retained through another generation. And you all become what Borat rightfully disparage: retards.

Borat implore in movie trailer, “Please! You come see my film. If it not success, I will be execute.” Too many Jews and racist and retard in audience – so Borat in no danger of being execute.