Apathy on the Bounty. 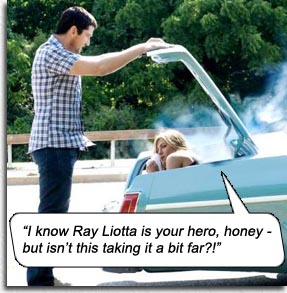 She hates him. He hates her. They drive each other crazy… Of COURSE they get back together; it’s a White American Romantic Comedy. Did you expect you’d have to use your brain to follow an actual plot or something? All I ask is that you don’t puke on my shoes. I’m having a hard enough time cleaning off my own puke.

Gerard Butler (the Man’s Man) and Jennifer Aniston (the Man’s Woman) star in this fluffy romantic comedy about bounty hunter Milo assigned to pick up his ex-wife Nicole for skipping bail. Okay, we’ll grant that premise, because there are definite laughs in the pain you can inflict on your ex whether you are the hunter OR the lammer. But the convoluted, implausible means by which the filmmakers arrive at this scenario is enough to make you break the Geneva Convention ruling on torture.

We can imagine the greenlighting execs laying out their conditions:

“Make sure her warrant is for a really innocent charge so we don’t alienate our demo.”
Check.
“Make her mug shot look frothy-perky.”
Check.
“And make sure she’s investigating a murder case, so that not turning up for her court date is not seen as hubris from a spoiled smokin’ hottie.”
Check.
“Oh, and make sure we can see her thighs in every scene.”
Sorry, what did you say? I was looking at Jennifer Aniston’s thighs…

And with Butler and Aniston being so fit and watchable, the movie annoys us with its deprecation of them. In a scene where they infiltrate an exclusive golf club, Nicole (comedically undercover) says to the snooty receptionist, “I was a former model,” and the wizened cow of a receptionist remarks disdainfully, “Oh, how long ago was that?” Excuse me, but are you looking at that woman with the breasts staring you down and the waist you can encircle with just the palms of your hands? At the same club, Milo can’t catch a running caddy, breathlessly quipping, “He’s got twenty years on me!” That may be so, but after we’ve seen Butler’s Spartan bod in a bath towel, we realize he could run down a panther without breaking a sensual, woman-juice sweat, so we just don’t buy that he can’t catch a nerdy caddy who probably spends more time on X-Box than dating. The same deprecation occurs in COUPLES RETREAT (where three spinner hardbodies are shy about revealing themselves in bikinis). People complain of the media setting unattainable beauty standards, then we are shown near-perfect specimens in these movies – and the near-perfect specimens are complaining! What now, thunder thighs?

Christine Baranski (THE GOOD WIFE) is Nicole’s avant-garde actress mum who just wants a quick phone-pic of Milo’s butt, Jeff Garlin (CURB YOUR ENTHUSIASM) is Milo’s henpecked boss, and Jason Sudeikis (THE ROCKER) is a co-worker of Nicole’s with an unrelenting crush on her, not helping his chances with that child-molester ‘stache.

As sexually stimulating as it is to speculate stickily at what’s just one inch above Aniston’s hemline, and as cheeky dynamite as Butler is in the re-pursuit of his ex-wife for monetary gain, it’s not enough to base a movie on, so writer Sarah Thorp and director Andy Tennant subplot a murder that Jennifer’s reporter is investigating, and Butler goes along for the ride because… well, those thighs…