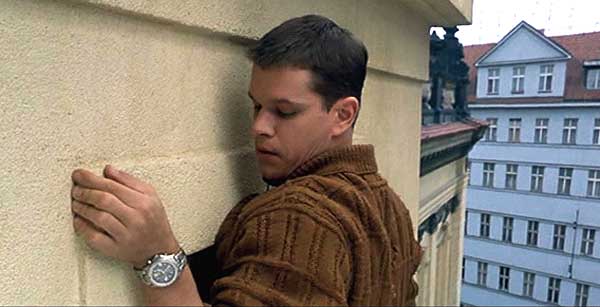 Bourne To Do It.

Batman and Steven Segal had a baby, and his name is Jason Bourne. At least, he thinks that’s his name.

After being pulled unconscious from a European ocean, Jason Bourne (Matt Damon, with that overly concerned look on his face that signifies he’s Acting) awakens with a head-throbbing case of Selective Amnesia in THE BOURNE IDENTITY.

The chop to the Spock Nerve

What else can we call it? He can remember several languages fluently, all the martial arts of Steven Segal, all the espionage tricks of James Bond, all the deductive skills of Batman, all the driving skills of Mario Andretti – but not his name. He doesn’t know how he possesses these incredible combat skills and all this pent-up knowledge, but he uses it to his advantage in tracking down his true identity. And impressing chicks.

He’s meant to be smart as hell, yet with all the fake passports, the inbuilt survival skills, the numerous bank accounts, explosives and computer knowledge, we figure out much sooner than he does that he’s a CIA operative.

Apparently, he botched his last kill assignment with a Ugandan named Wombosi (Adewale Akinnuoye-Agbaje, who seems like he’s doing a bad Eddie Murphy impression, until we realize that it’s Eddie Murphy who does such a good Ugandan impression) and he’s been on the run ever since.

Now the CIA, under slimy Chris Cooper, wants to kill him – because that’s just how the CIA shows its love to former agents. And Bourne must use his mad skills to show his love back.

Brian Cox is the CIA boss and Clive Owen – long overcoat and all – is a hitman out to get Bourne. Button-nosed Julia Stiles is a CIA gopher.

We realize too late that THE BOURNE IDENTITY is a showcase for director Doug Liman to squeeze as many stunts and chases out of a Robert Ludlum novel as possible – apparently, the movie deviates grossly from the book – but it’s done artfully and it all takes place in Europe, so it’s exotic and sexy.

The obligatory car chase thankfully contains a minimum of arbitrary smashes, and when vehicles do crash, they just slam into each other and dent, glass shattering; obviously these cars are not as volatile as American cars that explode on the slightest impact or do flips off the backs of other cars when someone looks at them sideways. 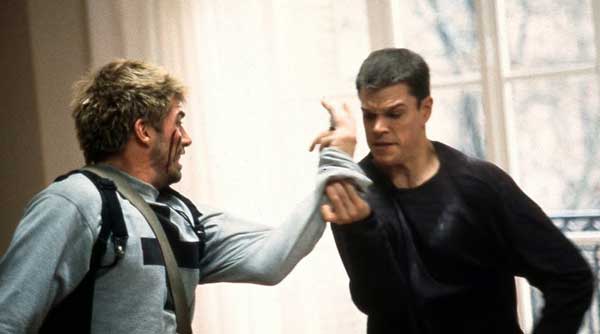 Matt Damon IS the yoga instructor!

In ROUNDERS, OCEAN’S ELEVEN, MR. RIPLEY, Damon was good, but always overshadowed or made to share the spotlight. In THE BOURNE IDENTITY, he has found his muscle stride; ripped himself up for the role of this assassin’s assassin. With this movie, Damon becomes his own man, no more Mrs. Affleck.

THE BOURNE IDENTITY DVD features a tacked-on alternate beginning and ending to “make it more current” in a post-9/11 world – yet these tags in no way help the film, serving only to add a very lame very beige explanation monologue by Brian Cox and a cringeworthy Hollywood Romantic Ending where lovers run into each others’ arms as the outro song starts – Moby’s breezy, boppy, catchy little swirl.

The biggest stupidity with this alternate material: The filmmakers succinctly state “We felt there shouldn’t be any extra explosions than necessary – that no one will ever watch another movie with another explosion after 9/11,” so they excised many Pretty Orange Explosions. So how do the idiot marketers describe the Alternate Version on the DVD packaging? – “THE EXPLOSIVE ALTERNATE VERSION.”

The original ending featured a cool ironic resolution: After months apart, Bourne tracked his girl to a scooter hire store where she worked, walked in and asked, “Can I hire a scooter?” She tries to tamp down her huge joy at seeing him and asks nonchalantly, “Have you got any I.D.” He answers with a wry smile, “Not really.”