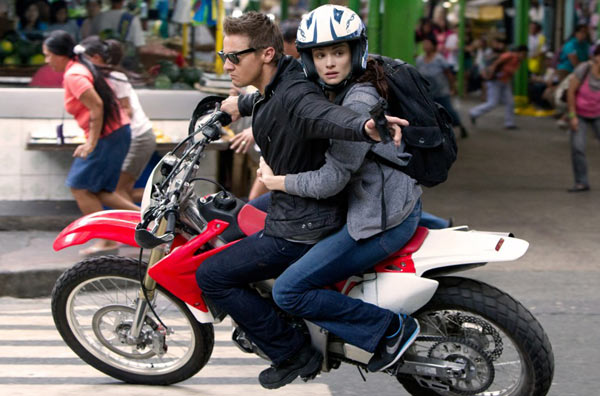 Jason Bourne IS Hawkeye! THE BOURNE LEGACY finds Renner as Aaron Cross, pitted against the same shadowy organization that plagued Jason Bourne – Treadstone. (And you thought that the slogan meant Renner was another agent named “Bourne,” right? – “There Was Never Only One.”)

We meet Cross hiding out in snowy mountains, in an opening frame that alludes to Bourne’s opening scene – a man floating in water. We discover Cross is some kind of agent undergoing enhancements for his speed, agility, strength, reflexes (hmm, you mean like some kind of… “super-soldier”?). He is pill-popping, being kept in isolation, and living off the land like a bear gryll. Meanwhile, in another part of the movie, there are rooms of drogues sitting at computers trying to locate a guy named Jason Bourne, represented by Matt Damon’s face on a computer monitor.

Cross discovers another agent like him living in the woods (Oscar Isaac). But before Cross can find answers to his existence or purpose, a missile soon ends Oscar’s life and their budding bromance.

Eventually, Cross will discover Treadstone initiated this super-soldier program –cough-Captain America— and are now closing it down, thus killing all the agents involved and all the doctors who administered the enhancement drugs. One of the doctors is Dr. Shearing (Rachel Weisz), who would fulfill the role of Female Who Runs From Danger With Hero.

The filmmakers (director-writer Tony Gilroy and co-writer Dan Gilroy) are trying to retroactively tell us that the Jason Bourne we know (created by author Robert Ludlum) from the past three films has always been one of these “super-soldiers” as well, which is why David Strathairn and Stacy Keach and Joan Allen were trying to kill him in all those films. Wait! Wasn’t Bourne just a well-trained assassin? He wasn’t “enhanced”! Was he? Are these writers George Lucasing us with midi-chlorians?

The difference between Cross and Bourne is: when all those assassins were trying to kill Jason Bourne, we cared.

The filmmakers know this, and continually insert reminders of Matt Damon into the script. There is a scene where Paddy Considine exits a doorway and is shot in the head – a scene lifted directly from THE BOURNE ULTIMATUM. It’s meant to be happening in this movie’s timeline right now, meaning that they’re implying Matty is running around just offscreen somewhere. But it only reminds us that if this movie is happening while a better BOURNE movie is going on just offscreen somewhere – we’d rather be watching that BOURNE movie.

THE BOURNE LEGACY has the whiff off one of those sidebar tales that Tolkien or a fantasy writer might pen as a supplementary tale to their main epic narrative that no one cares about except themselves. It’s a story about what was done to make Jason Bourne what he is (–cough–supposedly), but it’s following a B-character instead of Bourne. Like we care.

So many actors here that I like, who can do nothing to salvage the irrelevant script. Oscar Isaac, unnecessarily terminated. Edward Norton as David Strathairn, shouting at doofuses at computer monitors to “get him the visuals right now” and “close down the exits” and “don’t let him escape” and “is the outcome terminated.” (Don’t make him angry. You wouldn’t like him when he’s angry.) Corey Stoll, as one of the shoutees. Big fat Stacy Keach leaning over tables that creak under his elephantine bulk. Even the real David Strathairn for two seconds; Joan Allen for one second; Matt Damon as a jpg for three-tenths of a second.

Treadstone sends a Japanese assassin after Cross and Shearing. And there is a bike-chase which should be second act fodder, which shockingly has to suffice as the “exciting” climax of the film, with some very vanilla CGI, and nothing seemingly at stake except this B-character who isn’t Bourne and this chick who administered him drugs, who, ironically, has no chemistry with him.

Damon turned down this movie because he said, “The script was shit.” It is. But this would not have been the story had Damon been involved. It must have morphed after he declined it, and the filmmakers had to resort to those gimmicks of inserting him peripherally. From what we hear, the story may have been structured to focus on Damon, with Renner being a secondary character. No matter now, as the whole franchise is compromised. Wait, now I see why Treadstone wants to wipe out all traces of their program if one small element is compromised – they’re right! Destroy this film! Terminate! Terminate! Terminate!