In THE BOURNE SUPREMACY, Matt Damon IS (still) Jason Bourne. The superspy from THE BOURNE IDENTITY (2002) is STILL on the lam, from the people who STILL want him dead – his ex-employers STILL at the CIA. Even though they’ve almost forgotten him at the opening of this movie, he lays low in India with his Euro chick, Marie (STILL Franka Potente). 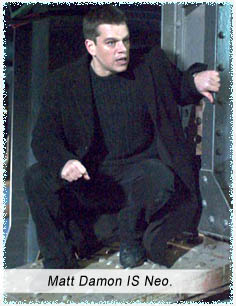 But other people STILL want him dead. It’s a sequel – who needs a reason?

Before we can say, “contrived plot,” suspicious Euros plant Bourne’s fingerprints at a robbery location to frame him, and then send an assassin (Karl Urban) to track him down in India and cook his goose – at the very least, curry his chicken.

Now maybe I’m being too logical here, but if these Euros have gone to all the trouble of hacking Bourne’s fingerprints, planting them to frame him for a crime, then sending someone to assassinate him, wouldn’t it seem sensible to send an Indian operative who could sneak up on Bourne in India, rather than Karl Urban (who might as well be wearing his full Eomer costume from RETURN OF THE KING) who reeks Euro Bond Villain and sticks out from the local curry-mongers like Deepak Chopra at a Klan Rally?

Needless to say, as Urban skulks around trying to blend his white face into the brown people, Bourne picks him immediately as an assassin, “Hey, it’s that guy from Middle Earth here in Eastern Earth,” which precipitates the first of many creative, yet tiring, car chases.

Why send someone to kill Bourne anyway? A tad redundant, considering the framing is supposed to entice the CIA back onto his tail – which it does. I guess the Euros are just being what American spy agencies cannot dream of being – efficient.

While back at Inefficiency Central, the CIA bullpen is now overseen by Joan Allen (playing a battleaxe just a little too tough to be believable), doing the generic barking to generic peons at generic computer monitors, who have all devoted their generic lives, it would seem, to tracking Jason Bourne. And wondrously failing at their generic jobs. Allen’s airy superior is Brian Cox, who still can’t figure why he’s in this movie after making that egregious “alternate ending” to the last BOURNE movie.

Um… it’s a sequel. What is this thing called Logic?

Screenplayed by Tony Gilroy (who has a better grasp of author Robert Ludlum’s character now, so doesn’t need other writers to sully his one-trick pony) and directed by Paul Greengrass (mostly a TV director at this point, directing this like a TV movie), THE BOURNE SUPREMACY is like tripping down a flight of stairs, getting up and tripping again. All the action sequences are cut too hard and close for meaty satisfaction, from the hand-to-hand combat, to nystagma-inducing car chases, which lead to… more car chases. (The only thing the chase sequences do successfully is disguise some sensational drumming on the soundtrack.)

There is a cool continuity in keeping the same Moby song as the movie’s closer – or did they just forget they were making a sequel that just seemed like THE BOURNE IDENTITY?