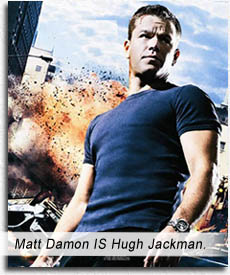 Another karate chop to the Spock Nerve, another car chase through crowded streets with no liability insurance, another amoral superspy whining over his lost humanity, all shot through director Paul Greengrass’s furtive Steadicams waggling all over the place like George Clooney’s head.

Seen it once, seen it at least three times.

And you must ask yourself, Are you a Bourne Completist or just a sucker for punishment?

Reviewer David Poland favorably compares the BOURNE series to the BOND series. I’m no Bond-aphile, but I can judiciously state that with the Bond series, each new movie gave us a new adventure, new nemeses, new escape predicaments, new luscious ladies, even new Bonds in some cases. In the three BOURNE movies to date, there is nothing new – rehashing the same plot and sold to us as some Great Trilogy (as if it was STAR WARS or THE GODFATHER).

Jason Bourne (Matt Damon) is still running, still trying to find his true identity (that is, the person he was before he was indoctrinated as a superspy), and the CIA (whose modus operandi seems to be to eradicate their own operatives so that illegal sanctions can’t be traced back to them) is still chasing him.

Joan Allen is still barking orders at the CIA bullpen (don’t these people ever sleep? They are literally in their offices around the clock), but now she is joined by the great David Strathairn (wasting his time and talents); button-nosed Julia Stiles makes another contrived appearance. Brian Cox killed himself at the end of the last movie because, we suspect, he just couldn’t take any more of the same plotline, but this movie provides a doppelganger to take his place as the crooked CIA boss – Albert Finney. Scott Glenn even tries to scare us with his vampire countenance.

Of all the assassins that have been sent for Bourne, the best fight must be that with the cold-blooded Desh (Joey Ansah, who reminds us of the dangerous Tarzan character from THE HARD WORD. When are Bad Guy Organizations going to hire Bad Guys who don’t look so obviously like Bad Guys?). Greengrass finds the perfect balance for this fight, reminding us of the best moments from THE BOURNE IDENTITY (2002, directed by Doug Liman). Unfortunately, his usual process of herky-jerky cameraworky will hurt your eyes long before the Bad Guys lose interest in Bourne’s butt.

At least all three of these films’ alphabetical order matched their chronological order.

Bourne does find answers in this third entry to the BOURNE franchise. Not only does he discover his real name, he discovers what a large asshole he was: in accepting his role as “Jason Bourne: Assassin” he himself gave up his normal life, which says something about his inherent misanthropy and sociopathic nature. Now he wants to recant his spy life – but though his spy life is murder and amorality deluxe, what kind of person must he have been prior to becoming “Jason Bourne” to want to become Jason Bourne in the first place?

A discontent, dangerous, amoral, damaged personality that would do anything to escape reality.