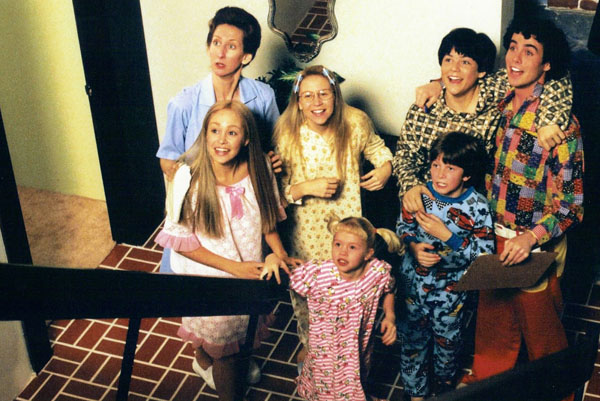 “Yes, come down and join us in Hell!”

At a press conference, Mike Brady summarizes the mildly insane plot of THE BRADY BUNCH IN THE WHITE HOUSE: “Bobby was playing in an abandoned warehouse where he really shouldn’t’ve been. But he was. Then he found a lottery ticket which he shouldn’t’ve taken. But he did. And then one thing led to another and I became President of the United States.”

That’s all you need to know about this execrable piece of dogshit that tries to pass itself off as a TV sequel to A VERY BRADY SEQUEL (1996).

Except for Gary Cole and Shelley Long (reprising their roles as Mike and Carol Brady dependably), all the kids from the first two movies have been replaced with the ugliest set of genetic mishaps to ever be called Bradys, none of which exhibit the barest sense of commitment to their roles, as everyone (Greg, Peter, Bobby, Marcia, Jan and Cindy – no need to cite actor names as they’ve ruined their careers from this movie onwards) exaggerates their character’s traits to the point of caricature. And Alice, with her wide-eyed head-waggling is just a hideous cartoonish harpie.

Populated with no-name actors (not one That Guy amongst them!), riddled with lame gag after lame gag, delivered in performances that make Original Alice look like an acting coach, with desperate insertions of callback gags to the original series, movie is a case study in “willing suspension of disbelief” as the convoluted plot trips spastically from Bobby finding that winning lottery ticket to Mike trying to find the ticket owner, then donating the winnings to his favorite fund, which demonstrates his honesty and decency enough for people at a presidential press conference to rally behind him for president when the current president is caught in a lie and actually keeps a promise to resign if his lie was discovered.

How devoid of ideas do you have to be to pitch this idiocy?

Well, considering Lloyd Schwartz (the son of original series creator/writer/producer Sherwood Schwartz) is co-writer and executive producer, he must feel that owning the Brady Bunch rights gives him the license to release ANY OLD GARBAGE stamped with the Brady brand and that fans will summarily eat it up.

He feels this way because THE BRADY BUNCH has been in syndication since its cancellation in 1974, and still garners ratings, proving there’s an audience, but what Lloyd forgets is the formula that keeps the 1969-1974 original sitcom successful in syndication: its verisimilitude is from a different era, and its saccharine is sincere. Here, there is no verisimilitude as eras clash clumsily, and the saccharine is satire.

So what is Lloyd trying to do? Tear down the original’s aura of niceness by mocking it? Is he trying to show us how out of touch that era was, or how out of touch the Bradys were in that era? Is he saying ignorance is bliss? I understand the HOOK of the movie (transplanting ‘70s-era straight arrows into 2000s corruption), but not the POINT.

And how does this BRADY movie pull in young non-fans? They would need to have an understanding of the Bradys’ innocence and insularity even during the series’ first airing (alongside the never-mentioned Viet Nam war or race riots, etc.) for the gags to be appreciated. Otherwise, it’s a bunch of out-of-touch bozos with lame fashion sense speaking dialogue with no inherent connection to anything.

The humor of the line, “Mom said ‘Don’t play ball in the white house!’” can only be fully appreciated if you know the original line. And though Mike Brady’s “installation of pay-phones in the white house to teach the staff frugality” might seem inherently funny as a new fiscal tactic, it’s funnier if you remember it’s a callback to Mike doing this to his kids in the original series. And unless you recall the fashion emergencies of the original 1970 cast, wearing those hippie clothes in 2002 just comes off as retro, not dweeby (which is the intent of the filmmakers). 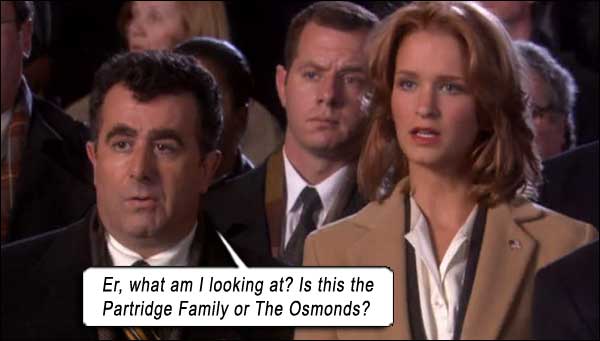 Carol suggests that Mike choose her as Vice President, because she wants to “clean up America.” At the hearing for her nomination, Congress vets her about as thoroughly as Sarah Palin, and – not to be outdone by other embarrassing Brady movies – there’s a song and dance number from Carol and the kids that will make you feel dirty, which is how Carol wins her position. (There’s a double-insult to the audience here: Carol could have just as easily made “Clean up America” her cause as First Lady, but the moviemakers make it seem like only a VP position could instigate this program; second insult is the notion that a family so squeaky honest would perpetrate this unethical nepotistic maneuver by president Mike Brady.)

What is Saul Rubinek doing here? Ten years ago he was in UNFORGIVEN! He’s Astor, the scheming Speaker of the House, trying to oust Mike Brady and Carol (president and VP), so that he can take over. Ah, now we see the economy of plot in making Carol VP – they didn’t need another no-name actor in the role of VP that Astor would then have to oust as well; also, no viewer would care about that character.

Greg falls for white house aide Veronica (Reagan Pasternak), who is in cahoots with Astor, so she wears a wire to gather dirt on the Bradys from innocent Greg and lisping Cindy. The Bradys’ absolutely innocuous past is spun by Veronica to make them look like sluts (Marcia’s diary fantasy on Desi Arnaz Jr.), sinners (Greg having a cigarette packet on him) and incompetents (President Brady announcing a harmless passing meteor as an Extinction Level Event).

The two gags that actually work (that you still need prior knowledge of the show to appreciate) are: the callback to Jan’s most famous lament, this time, as she busts in during a cabinet meeting regarding a Martian probe and her parents not having time to talk with her: “It’s always Martians Martians Martians!”; and when the family is locked in the bunker, Greg slyly tells Marcia, “Dad said we have to start civilization all over again…”

During the move to the white house, they cue that execrable Time to Change song. Yes, it’s time to change – the TV channel.