Delicious, with a hint of sour Keanu. 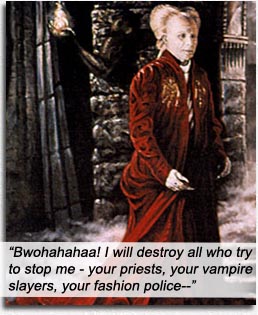 We all know the concept of Dracula; it is in our – ahem – bloodstreams, but in cinema, we rarely see Dracula’s origins. Director Francis Ford Coppolla opens the movie with the event that made warrior Vlad the Impaler/Count Dracule the blood-drinking psychopath he would become.

In 1492, Count Dracule’s wife (Winona Ryder), believing him to be dead in the Turkish wars, commits suicide. The Bishop pronounces her soul damned. Upon his return, Dracule (Oldman) renounces God and stabs a holy statue with his sword. Apparently, all you need to retrieve that elusive blood-from-a-stone is to stab it, for it gushes blood – which Dracule drinks lustily, then swears an oath that with all the powers of darkness he will return from the dead to avenge his wife. (Can’t figure who he wants revenge on, since she took her own life.) Which is also educative, as we see how easy it is to come back from the dead: if you vow something supernatural with a Gary Oldman level of psychodrama – it’s gonna happen!

Suddenly – Keanu, as Jonathan Harker. (Uh, what’s with the accent?) In “modern times” – 1800’s England – we meet the peripheral hero of Stoker’s novel embodied in Theodore Logan Esquire, play-acting in a posh accent like he’s attending a little girl’s tea party for dolls.

The Count sees a picture of Mina that Harker carries and is besot with remembered love, ageless as oceans. He believes Mina is the incarnation of his lost wife and sets his black soul on reclaiming her. (This “eternal love” aspect was inserted into Stoker’s story, for the better I believe, as it adds depth to the tragic hero). After entrapping Harker in his castle (at the mercy of his three vampiric wives), The Count journeys to England to seek out Mina and cause havoc with his drinking of blood, sleeping in coffins and out-acting everyone with one wing tied behind his back.

In London, while Renfield (Tom Waits) heralds Dracula’s glory from within the walls of a sanitarium, Mina playfully frolics with her best friend Lucy (Sadie Frost), unaware that plans are afoot to taint Lucy’s blood with disease, whilst destroying her virginity and independent thought – yes, marriage. The three men courting the libertine Lucy are Cary Elwes, Richard E. Grant and Bill Campbell. When Lucy becomes deathly pale and blood-sick long before any of the men put their tallywackers inside her, it is suspected that only a superstitious old curmudgeon can diagnose her disease, so of course they call in Dr. Abraham Van Helsing (Anthony Hopkins).

Van Helsing is also a vampire expert and realizes that the man-sized wolf prowling the property, the intermittent liquid nitrogen fog and the BITE-MARKS ON LUCY’S NECK means only one thing: there’s someone on set who is overacting even more than him…

Unfortunately for the production, Coppolla did opt to go a little cheap, shooting everything on stage sets, and though the indoor sets are as lush as blood-drenched wine, the medieval cello theme lending acres of trepidation to the shadowy palette, the fake outdoor sets are quite distracting.

Oldman sells not only the horror that his bat man brings, but the tragedy of his own immortality and love lost. When he tracks down Mina amidst a throng of cityfolk, it is as if they are the only two people on the street, as he tells her, “I have crossed oceans of time to find you,” which makes her swoon in pre-orgasm.

Beyond the tactile horror of blood-drinking and stake-thumping, this Dracula is a romantic tragedy, which is not the norm with Dracula stories. Only Oldman could sell it this way. And sell it he does, in every incarnation of The Count: from his warrior Vlad the Impaler, to the Continental Count with the big hair; he sells it as the uber-romantic tousle-locked Euro bounder, and as the knuckle-twisted, fur-covered man bat.

Gary Oldman’s thespian talents are on such display in BRAM STOKER’S DRACULA that it is simply unfair to dismiss these roles as cheesy overacting, because though he does camp it overboard, his emotional spectrum runs deeper than the worm-infested soil he snuggles in at moonset. He is, so to speak, the hammer behind the nails in the coffin.