Yes, they deserve to die – and I hope they burn in hell!
– Samuel L. Jackson, A TIME TO KILL.

In THE BRAVE ONE, Jodie Foster is Erica Bain, a New York resident with an independent radio talk show, happily engaged to a young doctor (Naveen Andrews, a Londoner, with Indian ethnicity). 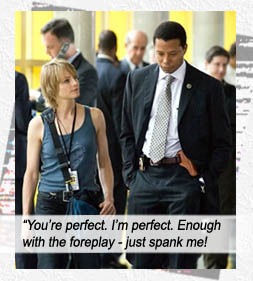 One night, walking in Central Park, they are mugged brutally, boyfriend killed, she scarred mentally. Upon her release from hospital, she views her home town haunts in a new, wary light. When she entreats the local police for leads on her boyfriend’s killers, they are utterly uncaring, which drives her to buy a gun and go Bronson.

Hit the streets like a waif target; let the molesters come to you and do them in. And do them in Erica does. The kills are well executed – direct, efficient, quick, with no Bond-talking or Batman–villain intricate explanations – just shoot-n-go.

Yup, it’s been done before – DEATH WISH (1972) and most recently, Kevin Bacon in DEATH SENTENCE (2007) – the vigilante bug. Beware its bite, these movies tell us, because it escalates from simple vengeance into drooling mania. Even Val Kilmer tells us this in BATMAN FOREVER (1995).

THE BRAVE ONE is made well, though not compelling enough to stand as tall as DEATH WISH. Written by tv writers, Roderick Taylor, Bruce Taylor and Cynthia Mort, and directed by Neil Jordan (THE CRYING GAME, 1992), it picks at those age-old scabs of whether we are all killers waiting to be unleashed.

Released from hospital after her ordeal, all tilted angles and motion sickness cameras every time Erica ventures outside – a creative way to impart her anxiety and surreal existence, in a town which used to be home, that now has fangs.

Every time I look at Jodie Foster, I can’t help but see perfection in that face. Should there be a law against having such a perfect aquiline nose, those summer-blue, doe eyes, and that sharp slit of a mouth with such high imperial cheekbones? So film-makers always lose me if they cast Jodie – I can’t suspend my disbelief past that perfection. Sorry.

Then again – for the ladies, there is Terrence Howard, as Detective Mercer, hot on the trail (and I do mean “hot”) of these seemingly unmotivated killings. If there is no law for a woman to look as good as Jodie, then there should at least be one for a man to look this beautiful…

At first, the police take it for granted it is a “he” wiping out street thugs. Then Erica decides to interview Mercer for her radio show and she starts liking on him – she does, after all, prefer dark meat – which prompts him to investigate her further, leading him to conclusions he shies away from, cos by that time, he is liking on her as well.

The bravest aspect of THE BRAVE ONE is that it lets Erica remain free at its conclusion. In collusion with Dreamboat Terrence, Erica offs her last molester every bit as brutally as his attack on her. The hypocrisy is that she admits to herself that she doesn’t like what she has become – even though she revels in it.

Now why can’t a vengeful character simply revel in their vengeance and not have to temper those feelings of satisfaction with gutless disclaimers? To be considered well-adjusted, must they always have to admit: “revenge is wrong”? On the DVD interviews, Jodie Foster cops out completely by saying that her character is INHERENTLY WRONG. But actual revenge killing can never be wrong – the revenge part is what makes it so RIGHT. I really wonder what the filmmakers would believe if they were victim to Erica Bain’s tragedy.

THE BRAVE ONE not so brave after all.