The tagline of BREACH squeals: “Inspired by the true story of the greatest security breach in U.S. history.” I find that hard to believe. 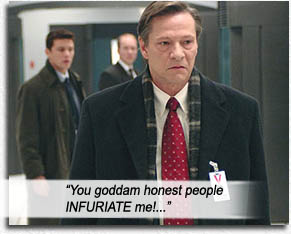 For many reasons, the most compelling being the current Amerikan political environment: by 2007, the United States was staggering, knees buckling under the killing burden of a patently criminal administration that betrays its own people for the individual gain of politicians. George W. Bush’s and Dick Cheney’s Amerika offers absolutely zero moral high ground to crow about OTHER people selling secrets to enemies.

The FBI and CIA, renowned and caricatured for their secrecy, duplicity and subversion (installing dictators, helming assassination attempts, providing disinformation to their own government, that government “spinning” the provided information for its own political ends, etc.) are the agency involved in this supposed capture of this supposed treasonous individual (who worked for them). But can we believe ANYTHING that agency releases as “truth”? Governmental espionage is an ABOMINATION of truth – and the makers of this movie have the temerity to single out one man as a scapegoat for the “greatest security breach in U.S. history”?

Apparently – so “They” tell us – in 22 years of espionage, Hanssen betrayed at least 50 human sources, three known to have been executed by the KGB. Believe it if you want to.

It would be intriguing and cloak-and-daggery were it not for the fact that it seems like nothing that important was at stake in Hanssen’s selling of FBI secrets to the Big Bad Soviets. (We never see any evidence or repercussions of his actions, he just skulks a lot, mailing packages in long shots and being arrogant in people’s faces.) One imagines that the Soviets would have gotten those secrets somehow – through someone – and that in 22 years, there would have been at least that amount of betrayals and deaths within the spy world anyway. (Once again, simply comparing the current administration’s internecine leakage of disinformation whenever it suits them politically, we can imagine that methods would not have been much different in those bygone days of less than a decade ago).

So without seeing how America was affected by Hanssen’s secret-selling, where’s the incentive to invest interest in this movie? The acting, directing, writing – all these things were quite adequate; Cooper owns the difficult, subtle role of Hanssen and Phillippe imbues his O’Neill with just the right amount of caution, fear and doubt – although Laura Linney playing a Hard Guy (O’Neill’s boss) was a little left of miscasting.

Hanssen makes it a point early in the film to show O’Neill how effortlessly he can tell if O’Neill is lying. He asks O’Neill for five statements, one of which should be a lie – and picks the lie. Why then, in their further relations – all of which are based on O’Neill lying to Hanssen – can’t Hanssen see that O’Neill’s very existence as his assistant is a lie? Or are we to believe that O’Neill suddenly gains a mendacious streak a mile wide that cannot be seen through? Or that Hanssen loses his discernment because he “trusts” O’Neill due to O’Neill’s great faking of sincerity?

O’Neill goes through the same doubts that audiences should use as filters – he can’t find anything wrong with Hanssen, except what his bosses are telling him.

Hanssen tells O’Neill the CIA credo: “Cooperation is counter-operational.” Illustrated most decisively by our very own government – when the thugs at the top (Bush-Cheney, Rove, Wolfowitz, et al) set such a luscious example of brainless, liability-less leadership, it lessens the import of the cogs being treasonous and duplicitous at lower levels. So why go after Hanssen? Karl Rove is a felon. So is W. Go after THEM.

When we learn that Hanssen is a devout Christian, we realize that he must be one of the worst criminals. Why? Because any devout religious “believer” also believes intrinsically in the Evil that must balance the Good of their deity, which means that whenever they do something wrong, it is attributed to that outside evil – they never blame themselves. Which means they could quite easily perpetrate the grandest crimes – with a sociopath’s impunity; the grander the crime, the more evil THE DEVIL was – not they.

There is a scene on the DVD that is written in two different ways… This fact alone should alert us to the inauthentic vehicle this movie is – for if it was “Based on a True Story,” shouldn’t there be only one way to play that scene out – i.e. the actual way it played out? Therefore, why should we believe anything the movie tells us? Sorry guys, you failed to suspend my etc.

The final text screens tell us that Eric O’Neill left the FBI in 2001 and now practices law. That could be true. They tell us Robert Hanssen is serving a life sentence, 23 hours a day in solitary confinement in a supermax federal penitentiary in Florence Colorado. That could be…? Can we ever be sure of what Hanssen’s fate is? He could be dead. He could be in Witness Protection. He might not have even been what the FBI accuse him of being – maybe he was just a scapegoat for a more heinous scenario, a small cog in a larger game of criminal insanity (Lewis Libby comes to mind). More likely, he’s probably a Special Consultant for Espionage with the very government who vilified him, earning a seven-figure income for the ethically devoid George W. Bush Klan.