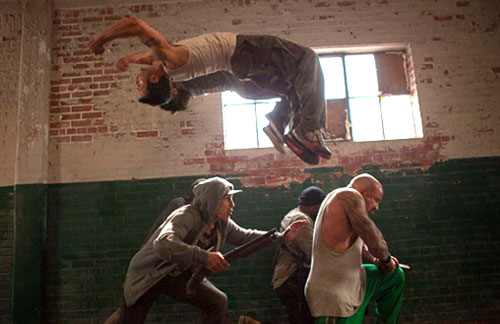 The unbearable lightness of acting talent.

Here we go again. Another plodding American remake of a blast furnace European film. BRICK MANSIONS is from 2004’s BANLIEUE 13 (aka DISTRICT 13), a jet-paced French actioner that starred Parkour inventor David Belle, weaving his unique free-running abilities into the fabric of the gunmetal plot. BRICK MANSIONS stars Paul Walker, and it weaves his unique non-acting abilities into the fabric of a plot that never made sense the first time, but was covered with daring direction, innovative action and a million karate chops to the Spock nerve.

A cop (Walker) and an ex-con (Belle, reprising his BANLIEUE role here) must infiltrate the walled ghetto in Detroit known as Brick Mansions to retrieve a bomb from the resident crime lord (RZA) and defuse it.

Luc Besson has rewritten his own screenplay from BANLIEUE 13, transferring the walls around Paris ghettoes to just one Detroit ghetto. Plot retains most of its snakeskin twists and turns, but the “talent” in this production cannot bring Besson’s audaciousness to life. From the cast to the crew, there are only two cool cats who make this exercise in crash-cutting worthwhile: David Belle, here as Walker’s sidekick Lino, but with a voice dubbed like he’s visiting from a GODZILLA movie; and Carlo Rota as a crime boss (good in anything, but I especially recommend him as Gardner Vance in QUEER AS FOLK. In his opening scenes with Rota, for some reason Walker reminds us of Guy Williams from the 1960’s LOST IN SPACE).

Paul Walker Hollywood Star takes the place of French combat artist Cyril Raffaelli from the original film, who could do everything better than him, so there is a noticeable lack of respect from the get-go – from the audience, from the stuntpeople, from David Belle, and from all the walls that Walker can’t run across. It’s an embarrassment that he even shares the same character name as Raffaelli – Damien. (I guess Jason Statham just wasn’t available, or this film might have been more runaway train and less pretend streetfighter.) Even the filmmakers seem to sense this, as they make up for Walker’s lack of physical prowess and emotive spectrum with ten million cuts during his fight sequences and by directing him to shout most of his lines like a block of wood.

Yes, I know, 40-year-old Walker died tragically five months before this movie’s release. The first closing title is a dedication to him. Very sad. Show some respect. Okay. But dying doesn’t make him more than a two-bit pretty-eyed lump who couldn’t quite act. Rest in Peace, laddie, but your untimely death doesn’t make you Olivier. Or Jason Statham. 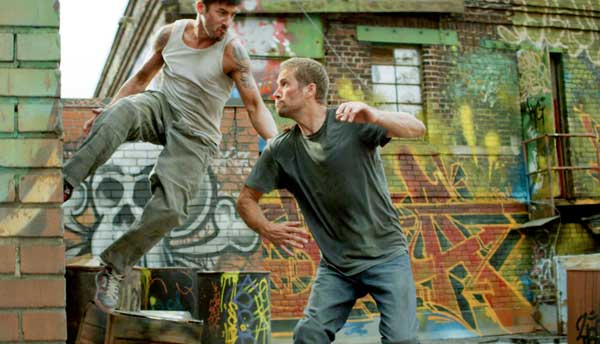 Every review unfairly makes fun of RZA’s acting. Is this simply displacement criticism that would have been aimed at Walker had he not kicked off? Though no Olivier himself, RZA does his gangsta best at playing Tremaine, a hard thug boss, nothing more, nothing less. Tremaine kidnaps Lino’s girlfriend Lola (Catalina Denis) and all we can see is sensual thigh. Gouchy Boy is K2, Tremaine’s right hand man, and Ayisha Issa is K2’s right hand man-woman.

Belle’s opening Parkour chase sequence across blasted rooftops is actually more formidable than his chase in BANLIEUE 13 (hey, credit where it’s due), but director Camille Delamarre (in his first feature) cannot sustain this level of dynamism and the tone of the movie is gradually lost amongst the technical flaws, bullet-fests and casting misfires. That’s not to say the tone is solid even during this first free-running chase – to those who don’t know Belle’s Parkour pedigree, the chase sequence might even read as incongruous and clumsy in the context of this movie: why is this Lino guy so good at this, and why should we care? Isn’t this a Paul Walker film? And when this chase started, every pursuer was a leathered, tattooed, heavily armed nigga (I’m not even going to gripe about their Imperial Stormtrooper aim whilst shooting at Lino as he’s running down a corridor and hitting nothing but corridor…), but after awhile, Lino’s pursuers are just unarmed 23-year-old wiggas in tracksuit pants and backwards caps. Who knew so many thugs were Parkour? And in the grand tradition of American remake that is vainly trying to be bigger and badder than its predecessor, when Belle grabs maximum air across two final buildings, as he did in the original, here, an explosion has to be on his heels… christ!…

BRICK MANSIONS is almost a frame-for-frame remake of BANLIEUE 13, but something is making it look silly and we can’t quite put our finger on it. No wait, I can put my finger on it – it’s Paul Walker. Man, that guy is a tool!

In the happy happy joy joy ending, Damien, Lino and Tremaine (cop, ex-con and crime lord) team up to bring down the corrupt mayor of Detroit Rock City. Then Damien does a slow motion drive through Brick Mansions where schools are reopening and tattooed men are taking down barricades in slow motion… Hooray! All those killers and dealers and rapists and crackheads that the wall was enclosing – they’re all reformed now, cos they’re planting trees and running for office and smiling at Damien as his slow motion car drives streets that are now miraculously clean and apple pie. So were all those underprivileged, starving, unhealthy inhabitants of Brick Mansions given government subsidies? And free health care? How is this isolated society suddenly rejoining the taxable community at all? Ah, I know: slow motion. I guess those previous robberies and killings they did for bloodied money don’t count any more as all those felonies are now in the past. It worked for Dick Cheney.

Movie chokes on so much syrup that Disney called and threatened to sue.