Marriage of heaven and hell.

One blond (Kristen Wiig), one brunette (Rose Byrne) and one fatty (Melissa McCarthy). Covering all the demos, are we?

BRIDESMAIDS was advertised as b 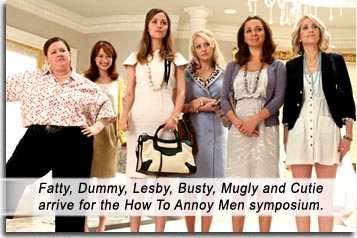 eing a Chick Flick version of SUPERBAD. Nope. It’s just super bad. About a lonely bridesmaid (Wiig) who battles another snobbish bridesmaid (Byrne) for the affections of the ugly bride (Maya Rudolph).

BRIDESMAIDS also aspires to being THE HANGOVER. Nope. The closest it gets to that raunchy film is when Wiig gets drunk on the way to Vegas and gets kicked off the plane. Then she wakes up with a hangover.

Judd Apatow produces. Yet even with his usually perceptive comedy radar, this movie fails. At least, for me. Because I have man parts. It’s not as hubristic as SEX AND THE CITY, but it’s almost as annoying.

Film loses me in its first frames, as Annie (Wiig) has raunchy, multi-positional sex – with her bra on. Who’s buying this shit? Unless it’s a quickie in someone else’s bathroom, or across the hood of a car, or on a crowded dance floor, what Man would tolerate the prudishness of a woman who bolts on her bra through hours of sex?! Annie’s fuck-buddy is Jon Hamm, delighting in squeezing her tits – through her padded bra. What kind of madness–? (During this scene, Annie actually cracks a BRADY BUNCH joke about “George Glass,” which only aged viewers of the 70’s series will appreciate, if at all.)

From there, it’s an estrogen thrill ride, as we are dragged like whipped boyfriends through Woman Adventure, i.e. choosing dresses, tennis doubles, lunch, brunch, chocolate fountains, weepy movies and whining about not being married. The unbrained message is, as always, if you’re Annie’s age and don’t have a husband, then something is wrong with you. Movie desperately tries to appeal to all genders and demos by injecting swearing, sex and scat into the Woman Adventure, but it’s just polishing turds.

Directed by Paul Feig, it’s mostly hell, but there are two good aspects about BRIDESMAIDS. One is Kristen Wiig. Co-writer, co-producer and lead, she sells this bilious piece of crap; a luminous darling of the screen, a female comedian who is consistently funny in all her work, and cutie-pie sexy to boot.

And the other amazing thing about this unfunny comedy is that everyone pulls off such a fine acting performance, all underplaying so well, it’s like they think they’re in a good movie (except for the fat chick, who plays it broad; yes, pun intended). Cameo from Matt Lucas (LITTLE BRITAIN), one of two fat, pasty Brits who love showing off their porcelain girth. Jill Clayburgh, the hottest chick ever (SILVER STREAK), is Annie’s mum. Chris O’Dowd is Annie’s tentative cop love interest, in a very sensitive performance; we feel his love and pain. Love of Wiig (obviously) and pain of being in this film (doubly obviously).

As well as Wiig, Byrne and McCarthy, the bridesmaid clique includes RENO 911’s Wendi McClendon-Covey and Ellie Kemper. And then there’s the bride, Maya Rudolph. Note how the ugliest of the women is the bride. Because she’s the ugliest. If she were one of the bridesmaids, she would have played Aggressive Ugly Chick, the role that the Fat Chick fulfills. It stuns me how anyone could consider Rudolph “beautiful,” or – heaven forfend! – keep impregnating her (!) when she is so obviously empirically mad ugly. Is it just a stock fallback position that one has to adopt around women in prominent positions, like Barbra Streisand and Jennifer Garner? I’m sure Rudolph herself – being a good actress and comedienne and more financially successful than I will ever be – would be the first to admit she’s a special class of beast. It doesn’t help when she takes a botulism dump in her wedding dress in the middle of the street. I was already on the verge of vomiting having to endure that face – and now I have to think of her greasy pork-hole expulsing feculence? Jesus on a donkey!

I’m telling you, Movie Maniac, the distraction of Maya Rudolph’s mugly noggin (and Kristen Wiig’s padded bra) robs fully half my attention from the movie. If you think it’s just me who is repulsed by that face, take a good look at the BRIDESMAIDS poster: Rudolph’s face is the only picture altered so much that she looks like someone else! We know that movie stars’ pictures are always “treated” to make them look ten years younger than their human age, sans pores. But on the BRIDESMAIDS poster, the Photoshop artist made some solid overtime on Rudolph: rounder eyes, less hooky nose, less grotesque lips, slimmer cheeks – it’s a work of art! Everyone else is doctored with mere contrast and color balancing. And even the fat chick’s face has not been touched by the Photoshopper’s knife – but they felt they had to do something about Rudolph! So it’s not just me who thinks Rudolph deserves some kind of Porridge Award for that puss – it’s the marketers as well!

And the marketers have done some extraordinary work, BRIDESMAIDS proving that the sniveling awards season is all about politics and not quality, as the movie is nominated for numerous Golden Globes, Oscars, AFI Top Ten, SAG Awards, etc. Even the Fat Chick has been nominated for Best Supporting just for acting like a vaginal erection.

And as if the movie isn’t painful enough, Wilson Phillips perform the last song. You read that right: Wilson Phillips, that unlistenable 80’s girl trio of vocalists made up of one blond, one brunette and one fatty. Oh, I get it now…