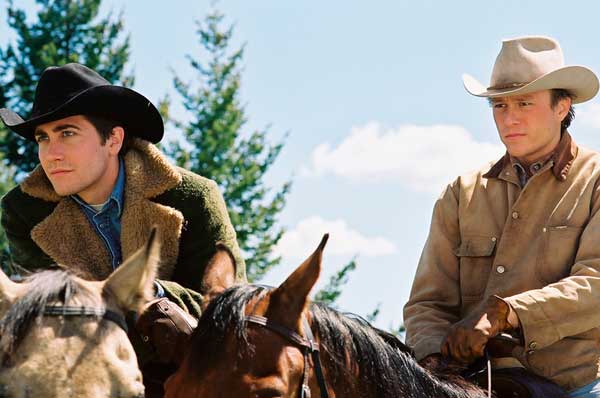 “Being in the closet, you think we should be wearing this much eyeliner and rouge?”

THE DAYS OF OUR LIVES meets The Gays of Our Lives, director Ang Lee’s BROKEBACK MOUNTAIN is an ambitious yet maudlin, slightly above-average American love story. Slightly. 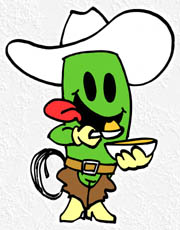 In place of two lily-white, perfect-complexioned heterosexuals battling for forbidden love, we find two lily-white, perfect-complexioned homosexuals battling for forbidden love; Ennis Del Mar (Heath Ledger) and Jack Twist (Jake Gyllenhaal), paragons of teen lust, embodying the “gay ideal,” rather than any Earth-based representation of homosexuality. Certainly not a “gay cowboy movie” (as the public glibly pigeonhole it), BROKEBACK MOUNTAIN is about as representative of homosexual love as DUDE, WHERE’S MY CAR? is representative of heterosexual love.

With Jack’s laughably soap-operatic line, “God, I wish I knew how to quit you!” it becomes jarringly apparent that for all its aspirations and marketing ploys, BROKEBACK is merely a Chick Flick clothed in XY chromosomes – a Dick Flick!

From a short story by Annie Proulx (and adapted for the screen by Larry McMurtry and Diana Ossana – no relation to Roseanne Rosannadanna), we follow our early-twenty-something characters, Ennis and Jack, in 1963 Wyoming, hired by a cantankerous Randy Quaid to herd his sheep on isolated Brokeback Mountain. Whilst sharing a tent one cold night, they engage in a violent, impromptu sex grapple. The next morning they both maintain, “I ain’t queer.” Sheep season ends and they part ways tersely, as is their masculine wont, both eventually marrying female wives – as is society’s wont. Rendezvousing for secret trysts over the years – on “fishing trips” – Ennis’ responsibilities to his family and job make it progressively harder for him to entertain Jack’s growing desires to “buy a ranch somewhere and settle down” with him. As Ennis warns, “This thing gets hold of us at the wrong time and wrong place and we’re dead,” relating a horrifying childhood memory of what was done to a homosexual in his community.

Now let’s get one thing uh, straight: these guys aren’t really “gay.” They both marry and sire children. By your own designation, doesn’t that plant them firmly in the bisexual bin? Onward…This movie is either hated because it is “too gay,” or lauded as “art” for the same reason. Like Ennis, the public is unable to forego its childhood inculcation, the stigma surrounding gay relationships still niggling like a cancer at the base of its collective cortex, the movie’s high approval rating merely a vicarious attempt at making hypocritical amends for that deep-rooted fear and misunderstanding afforded the gay minority.

We may know intellectually that no one is “gay enough to warrant a beating,” but our parents, our peers, our preachers and politicians beg to differ.

But I need make no amends, having never offended the gay community, so have nothing to fear, prove or lose. I can truthfully rate this movie as not powerful enough to outrage. Nor forceful enough to impress. As “gay cinema,” it shines for its mediocrity. Not as “brave” as Showtime’s stellar QUEER AS FOLK (2000 – 2005, starring Gale Harold and Hal Sparks). Nor has it as much “heart” as Nancy Meckler’s ALIVE AND KICKING (aka INDIAN SUMMER, 1996, starring Jason Flemyng), or Geoff Burton’s and Kevin Dowling’s THE SUM OF US (1994, starring young Russell Crowe). Nor does it possess as much gritty realism as Stephen Frears’ PRICK UP YOUR EARS (1987, starring Gary Oldman). And how can it be “pioneering” if the Romans of 2000 years ago ignored absurd delineations of “straight” and “gay,” but rather accepted every gradation of bisexual inbetween-ness? 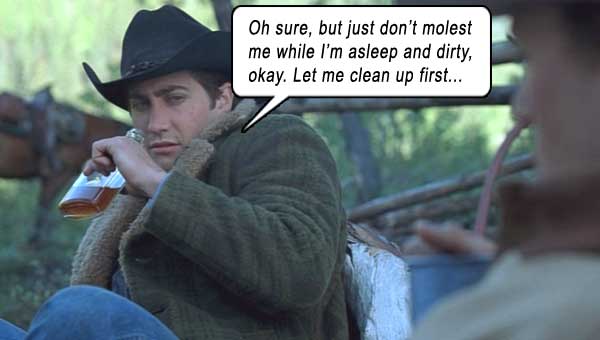 Still, as an infamous Roman once said, I come not to bury BROKEBACK; the cinematography is achingly beautiful – sweeping, sun-lazed, verdant vistas; Gustavo Santaolalla’s soundtrack is heart-rending; performances are superb, with neither principal shying away from potentially career-destroying embraces; their characterization thoughtful, with Jack’s extroverted rodeo slant on life opposed to Ennis’s clipped delivery of his lines through clenched teeth, from a life spent repressing urges. But, like any date movie, it is designed specifically for those predisposed to weepy romances and Romeo-Juliet tragedies. Further, due to the current confused social climate where it is more “in” to be Out, where marketeers propound the idiotic splash-phrase, “Gay is the new Retarded,” this film undeservedly assumes the mantle of “high art” simply because it deals with a sexual orientation that scares the bejesus out of Jerry Falwell.

In response to the fallacious reasoning that “all independent films are Art and therefore worthwhile,” SOUTH PARK’s Eric Cartman, in a fit of foresight for 1998, classified art films as “gay cowboys eating pudding.” Ang Lee seems to concur.

Art is Fellini’s 8 1/2, Gilliam’s BRAZIL, Kurosawa’s RASHOMON; BROKEBACK is no more “art” than BRIDGES OF MADISON COUNTY or LOVE ACTUALLY, and should more readily be relegated to the mainstream pap romance genre where it belongs.

Archimedes said, “Give me a lever long enough and a fulcrum on which to place it, and I shall move the world.” Ang Lee’s lever is BROKEBACK, his fulcrum is Hollywood. He may think he is moving the world, but his lever is unremarkable and his fulcrum is unsound. Being back-slapped by peers merely for jumping the latest fad, his forthcoming awards will mean nothing to the contingent his film is ostensibly made for.

Set in an era before AIDS, support groups or that Jerry Springer episode, “My Husband has a Gay Cowboy Lover,” when Ennis’s wife (Michelle Williams) discovers his secret, she represses it, heartsick for years, with no point of social reference to base any decisions on. The isolation worked both ways, as the two male lovers were just as bereft of support. Jack laments to Ennis, who is growing apart from him, “You don’t know what it’s like to get so little – of something which you need so much!” Which brings to mind a Zappa song – “He’s just a cowboy for a day / Of course, his evening’s not complete / Without some meat in the seat” – with the somewhat ambiguous title, He’s So Gay. 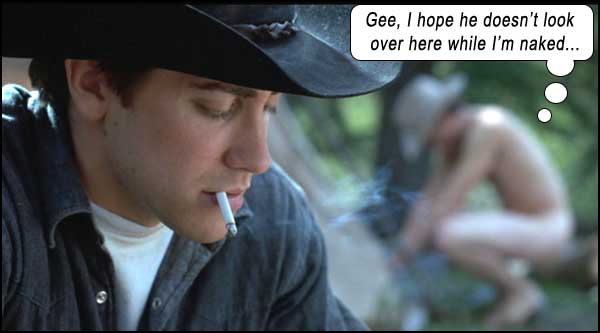 A tragic finale is a given and will surely wring tears from those inclined to weep at movies of this ilk. But the tragedy of this film’s popularity is that there are no tears shed along the way. That is, who shed tears for Ennis’s wife when her life was destroyed with the discovery of her husband making out with another guy? Who wept for Jack’s wife (Anne Hathaway) when Jack drove to Mexico and hired a male prostitute? Who wept for the children of Ennis and Jack who were indirectly affected by the neglect they encountered due to their fathers’ preoccupation with “fishing”? (Ennis’s daughters grow up so fast – and are portrayed by so many different young actresses – that we never perceive a paternal bond. He is not painted as a “bad” father, but neither does he seem to possess the tolerance to be a “good” parent. Let me clarify, for those pc monitors waiting to pounce: he is not callous because he is gay; he is callous because he is In Love – which is as banal an excuse as any.) As with all American Love Stories, the audience is geared to only care about the feelings of the lead characters In Love, the peripheral characters fulfilling their roles only as hindrances to True Love.

And who cries for Randy Quaid, whose sheep never got herded properly?…

BROKEBACK is a towering emotional journey – if your inner gender is effeminately attuned (this is very evidently a story written BY a woman, LIKE a woman, FOR a woman). But this movie is assuredly not for those sane citizens of Earth who consider that Barney the Dinosaur is, in fact, “gay enough to warrant a beating.”

This review was posted at imdb and subsequently “deleted by IMDb based on an abuse report filed by another user” – which is EXACTLY the type of close-mindedness I allude to in the review; the extreme, ignorant loyalty to a hype: “…either hated because it is “too gay,” or lauded as “art” for the same reason.”

Whoever reported the “abuse” (whether gay or otherwise) is obviously an illiterate, who cannot discern humorous appraisal and tongue-in-cheek, from “gay-bashing.”

Unfortunately for the gay community, it is illiterati like that knucklehead who are heard and seen on both sides of gay issues; closeminded knee-jerks who don’t take the time to avail themselves of all the info before knee-jerking.

BROKEBACK receives no worse a bashing than CATWOMAN or THE PEACEMAKER or LOVE HAPPENS, yet this average article suddenly assumes a “controversial” skew because of one humorless jackass.

Thank you, Jackass! I am important enough to be hated!…