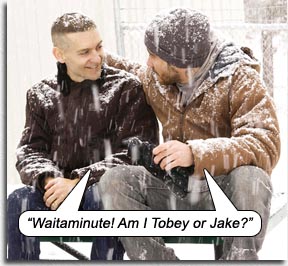 What separates Jim Sheridan‘s BROTHERS from Michael Bay’s PEARL HARBOR (same plot, different war) is that BROTHERS is watchable. Starring Tobey Maguire as Marine Captain Sam Cahill and Jake Gyllenhaal as his renegade brother Tommy (didn’t Kirsten Dunst’s Breasts get so confused over their resemblance that she slept with both of them?) and Natalie Portman as Grace, the hot grieving wife. Their father (cantankerous Sam Shepard) is a dismissive, abrasive Viet Nam vet, who frowns on Tommy getting out of jail and smiles on Sam leaving on yet another Afghanistan tour.

Based on the Danish film BRØDRE (by Susanne Bier and Anders Thomas Jensen), Jim Sheridan directs BROTHERS with a subtle hand, playing against the inevitable. We know the story going in, so the storytelling does not unfold as conveniently as expected.

The movie is sold on its brilliant performances. Watch for all the little details, the human interactions.

Tommy tries to move past his directionless, drunken life, finding a purpose in comforting Grace just by being there; Grace coping with the loss of her husband yet having to raise two scathingly cute little girls (Bailee Madison and Taylor Geare) who are tremendous actresses and have a solid future of irresponsible tattooed Hollywood boyfriends and detox facilities to look forward to.

BROTHERS switches between Sam’s torture scenes in Afghanistan and Sam’s brother Tommy casually cultivating his wife Grace in the States. The truth is, the Afghanistan scenes bore. We’ve seen it all before and it adds nothing to the story. War is hell, right? Do we really need to cutaway to Sam and his private in a cave so many times? Sam is eventually forced – by the Generic Bearded Oily Guys – to either kill his private or be killed. “Hero” that he is (all military guys are heroes, right?), he repeatedly slams a metal pipe onto his private’s head to preserve his own life. What would YOU have done? Death Before Dishonor, right? Wouldn’t a true hero have given up his life for his friend?…

The problem with BROTHERS (which I also consider a commendation, because it deviates from Hollywood protocol) is that it puts us on the road to romance, with the subtle looks and meaningful silences between Grace and Tommy – eventually they share but one guilty pleasure kiss – but then like a needle scratching across a record, Sam comes back, driving us unbidden back into the bland mundanity of marriage. And despite its heavy, disturbing scenes with Sam going bonkers over his wife’s imagined infidelity, it pretty much ends on that bland note – of Grace taking Sam back because familiarity denotes she stand by her man, with Tommy completely ousted. It’s very sad, because the real “hero” was Tommy, the guy who atoned for his past sins, and was aiming at being a good provider and surrogate father, rather than the guy who killed his private to preserve his own life, smashed his kitchen while accusing his wife of screwing his brother and scarred his children and neighborhood by being surrounded by police and firing his gun into the air like an asshole.

BROTHERS is about the consequences of war, not the causes. Though set in 2007, it doesn’t explore the politics of Bush-Cheney’s fake war on terror, rather focuses on the Post Traumatic Stress Disorder that those swine caused in millions of otherwise average men and women.

The greatest scam the American Military pulls on its volunteers is that it fools them into believing they are fighting for the type of life they are leaving behind, while simultaneously flensing them of all aspirations to return to that life.

Though he is receiving counseling at home (which the movie never shows us), Sam requests of his superior (Clifton Collins Jr.) to be assigned back to Afghanistan! It is not so much the horrors of the fake war that have affected him or that he cannot relate to his closest loved ones, it is that he has been conditioned so effectively as a military cog that he knows no other form of existence.

Any critique against the military should really be aimed at the devil marketers/ nutless politicians who sell the false rationalizations: “for country,” “for democracy,” “for good against evil,” etc. People have the propensity to be led; that’s a truth as old as cave dwellers; it is WHY they are led that differentiates between reason and discord. If they are led to harmony, that is commendable, but when led to discord – and told that the discord will create harmony (a demonstrable lie) – that’s when you get The Modern Amerikan Military.

Volunteering to kill people, by definition, is anti-social, and only weak-willed latent sociopaths would do so. Cue rationalizations, so as not to appear weak-willed and sociopathic. When a military person returns home with PTSD, it’s not because being in war made them unable to cope with society, it’s because being in war gave license to their actual personality which is necessarily stultified in society upon their return. And to paraphrase Freud, Repression is a bitch.

In the case of Sam (played by Tobey Maguire with glazed-eyed conviction, disturbing acrimony and a severe jarhead haircut) why is it not considered that maybe his family life was actually repressing a darker, wilder side that his brother acted out on? In acting out his demons, his brother seemed much more adjusted.

Don’t you just hate it when you live your whole life well-adjusted and the person who becomes maladjusted, murders people under the illegal sanction of “war” and then costs the State and taxpayers hundreds of thousands of dollars in rehabilitation and special needs facilitators just to get back to a state of adjustment that your stronger brain was always at – is considered the Hero?

Don’t you just hate that?

The Carlin Prerogative.
Most people agree War Is Hell, War Is Stupid, then they paradoxically disclaim, “But support the troops.” But doesn’t it follow that if war is stupid, then the people who volunteer for wars are perpetuating that stupidity? Maybe you blame the stupidity of unnecessary war on politicians, but as George Carlin would say, “If you want to stop wars, don’t keep showing up! Don’t sign up to be a soldier. Let’s see politicians go to war without an army.” The catchcry for all those who detest war should therefore be: “DON’T Support The Troops!”