Social Commentary with a Depilated Sphincter. 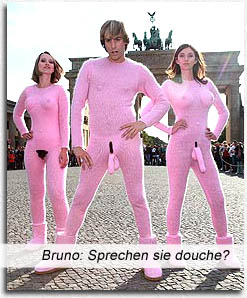 Not for the faint-hearted or the weak-minded, but definitely for the limp-wristed and the ball-shaven, BRÜNO drags us like fag hags through the darkest recesses of the human psyche. Exactly like BORAT, only gayer.

Like a freight train thundering on homosexually steel wheels, tapping a pygmy lover with a penchant for champagne bottles up the arshplunken, the gloriously body-shaved Sacha Baron Cohen, creator of BORAT (2006), smacks us in our ballen-schmickels with BRÜNO.

Superlatively gay Austrian fashionista Brüno (Cohen), host of Funkyzeit, is schwartz-listed throughout Europe for his intrusion in a fashion show, so travels to America (and “the Middle Earth,” Palestine, Israel) in his quest to become the “biggest Austrian superstar since Hitler.”

That’s the basic throughline, upon which to concoct vignettes geared to offend, to dambust American redneck ignorance once again. (Did someone say con-cocked?) And make no mistake: “redneck” does not just denote the Deep South of Alabama, but the Deep South of Humanity, found in Brüno’s travels all over the world in the most sphincter-gruben places. Brüno only mingles with V.I.P.’s (Very Ignorant People). Hard to believe that even with the homo-ungus success of BORAT, Cohen has found more people on this Earth who are actually unaware of his ball-busting characters.

Granted, this version of Bruno is noticeably different to his appearance in DA ALI G SHOW (Cohen’s entrapment-styled talk show), but it’s amazing how far people will go before they step on his outrageousness. The background stories on how he wiggled his depilated arse into these situations sometimes read as more interesting than the film: here is one article on how this production duped the Alabama National Guard.

The gut-busting laughs in BRÜNO come purely from Cohen’s marks having no idea he is pushing himself on them specifically to document their absurd reactions. Pretending to fellate the ghost of “Milli” (from Milli Vanilli) is just a dumb joke, but pretend to blow Milli in front of a “psychic” who has claimed to Brüno that Brüno can touch Milli’s spirit in the room, well, that’s taking the stupidity of the psychic’s claim to its logical end – if you can touch a spirit (which supposedly edifies both the spirit and yourself), why not blow the spirit for both your pleasure?

In his quest to be the “biggest gay movie star since Schwarzenegger,” Brüno enlists a talent agent; again, someone not in on the gag, but who goes along with Brüno’s eccentricities because, we surmise, Brüno is accompanied by a film crew – and in Los Angeles (whether for a documentary or a crap indie), everyone is more than willing to get into frame and make arsh-plunkens of themselves.

BRÜNO must necessarily be dirtier and further flung than BORAT: a screening for his fashion show pilot to a group of doughy rednecks involves painfully long minutes of flailing his tumescent penis in front of the camera, and an “exclusive” interview with Harrison Ford, which is merely Brüno ambushing Ford outside a restaurant and Ford saying, “Fuck off!” in passing.

In auditioning babies for his modeling agency, Brüno questions L.A. parents on what they are prepared to put their kids through to score a gig. The parents’ reactions will repulse you; not just their answers but how quickly they answer, stepping on Bruno’s questions in their fervor to prostitute their children – from letting their babies experiment with acid, to being dressed as Hitler shoving another baby in a wheelbarrow into an oven, to operating heavy machinery, working with phosphorus, liposuction (!)…

Brüno meets a “gay converter,” whose lips, Brüno notes, are not being put to their best use by praising jesus. The converter doesn’t get that the gag is not the only punchline, but that he and his still-gay lips are as well.

In trying to bring peace to “the Middle Earth,” Brüno brings together Palestinian and Israeli leaders in sitdowns. Okay, it’s a gag movie – but how does he actually score these interviews? And literally giant superstars help him end the film, in a fey singalong with Elton, Bono, Sting, Snoop and Slash.

Brüno even finds time to come onto the only Congressman of any party who speaks truth, Ron Paul. Oh no! Not Ron Paul! With Brüno thinking he was Ru Paul…

Film ends when a subplot with his pining assistant, Lutz (Gustaf Hammarsten) is resolved as pure love – in the wrestling ring at a Straight Dave’s Maxout Slam, where hurled chairs and bottles threaten their life as they express their man-love to the rabid, booing mongoloid wrestling crowd.

The most amazing thing about Sacha Baron Cohen is how he stays in character so solidly even in the midst of potentially life-threatening situations. I’m sure there are scenes on the cutting room floor where he must fall out of character to avoid being killed – many times he is floored with security guard knees in his back – but it’s amazing to see how far he does get in the screened clips. And if he can do it in those deadly situations, it is no wonder he is such an improv marvel in TV interviews where nothing is at stake.

Every reviewer of BRÜNO or BORAT somehow thinks it profoundly astute to crow over Cohen’s films bringing out the deep ugliness of humankind. Like we didn’t always know that humanity – for all their Museums of Tolerance and black presidents and women voters – are still a bunch of intolerant arseholes. Sacha Baron Cohen’s marks are not isolated pockets of mongoons – there but for the grace of your magical deity go YOU. Go me. Go all of us. It’s an evolutionary trait to fear what we do not understand. Even if we accept, tolerate or welcome different customs, orientations, magical deities, our visceral, protective animal natures continue telling us otherwise.

Is it so hard to admit we are ALL Brüno’s bitches?

Is that why my fingel-schtuffen feels so stretched after being in that dark theatre?