Bullets On The Brain.

BULLET TO THE HEAD is Sylvester Stallone in Gritty Tragic Mode, an old-school hitman named Jimmy Bonomo, whose partner is killed by a mercenary after what should have been a regulation whacking. On the other side of the tracks, a cop’s partner is killed by the same merc in what should also have been a regulation whacking (cops call it an ‘arrest’).

In a world where coincidence is spelled l-a-z-y s-c-r-e-e-n-w-r-i-t-i-n-g, Bonomo teams with the Korean cop, Taylor (Sung Kang), to track down the killer of both their bros. It’s an uneasy partnership, with Taylor the cop “allowing” Jimmy the hitman to work his outlaw magic to progress their manhunt, yet constantly warning Jimmy that when their hunt is over, he would come for Jimmy for breaking the law. How’s that for two-faced cop?

BULLET claws for a foothold amongst ’80’s mismatched buddy pics. And slips off, banging its head on lack of chemistry. The closest action movie comparison is 48 HRS where a cop was forced to team with an outlaw, but both Nolte and Murphy were powerful screen presences, whereas Kang’s uninspired prissy cop cannot hold a candle to Stallone oozing his veteran Stallion charisma.

Directed by Walter Hill (who directed both 48 HRS films), from a graphic novel by Alexis Nolent and Colin Wilson (Du plomb dans le tete), BULLET is a stock actioner, with Stallone wading into as many fight scenes as possible. His first one is at a darkened swimming pool where he strips down to just a towel around his waist for no good reason, other than to show off his sweet trapezius-deltoid ink. His usual method of dispatch is – say it with me – a Bullet To The Head.

Taylor the cop wants to keep each thug alive after they’ve divulged info on how to get to the next thug in the chain leading to their mercenary, but Jimmy is always giving the thugs – lemme hear you, Cleveland! – a Bullet To The Head.

There’s a fish-out-of-water undercurrent, as Taylor continues an ongoing intercourse with his smartphone for esoteric info, while Jimmy relies on – you guessed it – a Bullet To The Head. Besides the usual dinosaur jokes hurled at Jimmy (for not comprehending Google, etc.) Taylor wisecracks a classic, regarding his smartphone, “You should upgrade from carrier pigeons, or whatever Early Man uses.” Strangely, there is no payoff on the smartphone; a couple of people mention Taylor being umbilically attached to it – and Taylor himself admits he couldn’t do his job without it – but he never arrives at a situation where it either comes into play to save their lives, or where he must discard it to avoid… a Bullet To The Head.

Stallone narrates. In velvet baritone, he once again repeats his mantra from LOCK UP (1989), “Don’t trust anybody.” He tells us he’s been arrested 26 times, as we see various mugshots through the years. Maybe his new 18-25 demographic won’t look twice at these pics, but we’ve seen them thousands of times as publicity photos for ROCKY, RAMBO, COBRA, except now they’ve been hilariously Photoshopped wearing mugshot tags. 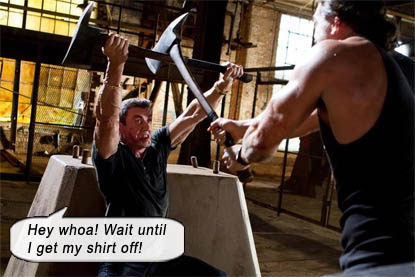 Mountainous muscle with a smile to melt buttah – Jason Momoa is Keegan the killer merc (CONAN THE BARBARIAN 2011). Though he works for businessman/gangster Morel (Adewale Akinnuoye-Agbaje), he thinks nothing of dispatching even Morel’s thugs with a – dare I? – Bullet To The Head. He’s either totally insane, or totally on-script.

Christian Slater is a coked playa holding an EYES WIDE SHUT party – for the gratuitous flesh this movie needs to propel it at certain points when the shooting stops. He gives a flash-drive (a key piece of evidence) to Jimmy and Taylor, and Jimmy gives him – refrain – a Bullet To The Head.

Now what I don’t understand is: why doesn’t Taylor (oh, technocrat cop with the smartphone up his arse) COPY the flash-drive so that this evidence is safe? Further, why doesn’t this flash-drive have a password? Taylor just plugs it in and it gives up Bad Guy info faster than a yellow stoolie. Later, when Morel (the bad boss) retrieves the flash-drive, he doesn’t think to ask whether copies were made, let alone torture anyone for the sake of finding out (or to make Dick Cheney hard).

Sarah Shahi is the eye candy, and plot cliché constantly being invoked:
1) She’s really a tattoo artist, but with one year of med school, she’ll remove a bullet from your shoulder while you swig on whiskey;
2) she tells Jimmy ‘I don’t remove bullets anymore’ then removes a bullet;
3) she’s smoking hot, so we WILL see a flash of those magnificent mammii;
4) she’s kidnapped to bargain for the flash-drive;
5) she falls for the Korean cop for no reason other than to nicely round out a lazy script.

And we’re in a Stallone movie: if we thought we were gonna get away WITHOUT seeing an axe fight in a warehouse, we must be 18-25. Keegan throws down two axes in challenge. Jimmy: “What are we, fuckin’ vikings?”

As Conan, muscular Momoa was surrounded by giant spectacle, so we couldn’t grasp exactly how big he was. But here, though Stallone is ripped like a bridge cable (the power of good diet, prayer and steroids), Momoa towers over him. (I hope to see this guy in better roles soon; he’ll probably end up in a Marvel or DC production.) One would think that Jimmy would beat Keegan by chopping his body or throwing him down a shaft or choking him with a chain (all totally viable kills in a clichéd Empty Warehouse Set), but in keeping with the tenor of the movie, Taylor shows up and shoots Keegan. Guess where he shoots him? Go on, guess. I’ll give you ten guesses where he shoots him. Guess guess guess guess —