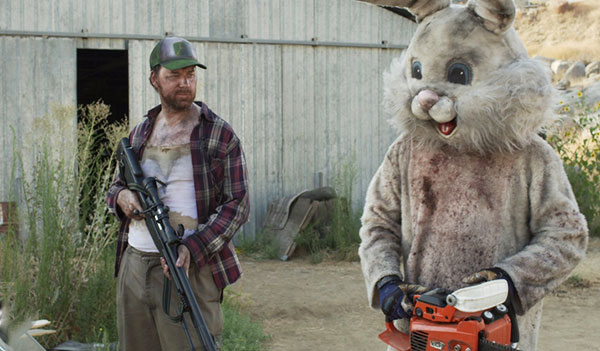 When Elmer and Bugs team up – pray it isn’t Wabbit Season.

Gruesome, gory, and oh so cute.

THE BUNNYMAN MASSACRE is the indie sequel to the sloppy slasher shitfest BUNNYMAN (2011), continuing the extravagant gore in the tradition of THE TEXAS CHAINSAW MASSACRE (1974), except the skin-mask has been replaced by a bunny head. And really, really bad acting.

Bunnyman (Joshua Lang, attired in constant bunny suit) goes on a killing rampage somewhere in the American Midwestern desert, using a rifle and a chainsaw. He takes the corpses back to his minder, Joe (David Scott), who sells them in his store as beef jerky.

Movie opens with Bunnyman murdering schoolkids on a bus. The action is badly edited, the acting is even worse, and the gore is festive, with blood splashed liberally over everyone in ways that make you think the actors just stood there with arms outstretched and legs akimbo and had an intern throw a bucket of red gelatin over them.

Then we see a couple having sex in a tent and, of course, they have to die, because as slasher movies taught us since FRIDAY THE 13TH, Sex = Death. Even though the blonde’s big naked fake tits are mounted inordinately far apart, she’s a great actor. Although I can’t be sure until I see more tit. Wait, she’s screaming, running, blood-splattered boyfriend, who? huh? what was the question again?–BIG TITS. 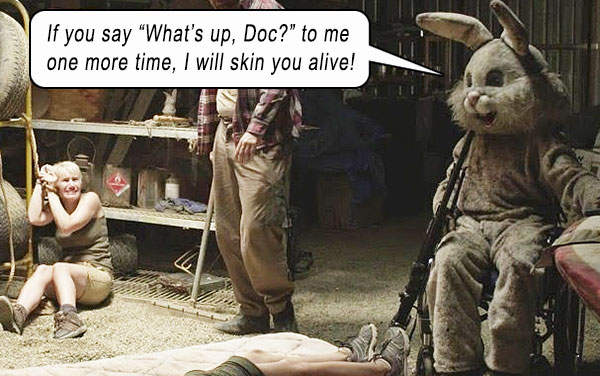 Then Bunnyman dejectedly wanders back home, where Joe is in the yard, stringing up a human skeleton freshly scraped of meat (which is a good way not to draw attention to yourself as a serial killer). We realize Bunnyman can’t speak, as Joe gives us backstory on how his throat was stabbed. (In the previous film, Bunnyman’s throat was, in fact, stabbed by a half-naked wench right at the end – but Bunnyman couldn’t speak even before that incident, using grunts to convey his emotions.) The hook of the mute man in the bunny suit is cool. Just don’t remove the costume for the entirety of the movie and writer-director Carl Lindbergh will have a cult classic on his hands…

Awww, like he did in the first film, Bunnyman removes his headpiece. That’s no fun. Up to this point, it seems like the bunny itself is the character – there is nothing deeper needed in a gore-fest with atrocious acting like this. We grow accustomed to seeing Bunnyman with his “security blanket” costume – he even eats by putting meat up under the headpiece to his mouth – but then when a captive girl pleads that she’ll do anything if he’ll let her go, he removes his headpiece to reveal his misshapen features, licking his lips to convey, uh, sex? carrots? LL Cool J?

Four women with no acting ability hike through the forest just asking to be murdered by being women hikers. Bunnyman tracks them with a machete. But wait, they aren’t asking hard enough because none of them has fake tits. Two of them stop for a rest, but don’t sit down, standing stiff as boards in their acting stances, facing the fourth wall and talking. Thankfully, Bunnyman kills them. He captures the other two, and one (Julianne Dowler) pleads to Joe to free her in return for bringing him three other women hikers. Sheesh! You can’t swing a chainsaw in the hillbilly serial killer woods these days, you’re gonna hit a woman hiker asking to be murdered.

The Sheriff (Marshall Hilton) enters Joe’s store and does some non-acting.

One woman escapes and instead of running into the woods in any direction, she climbs atop a trailer while not acting. Bunnyman knocks her off by kicking the side of the stationary trailer, which hardly moves an inch, yet she falls off. Later, when the chunky Liv Tyler lookalike escapes, she too doesn’t run into the woods but climbs atop another trailer. This time, Bunnyman throws a grappling hook up after her – and we presume Liv was trying to position her thigh where the hook would grab her, otherwise what other trillion-to-one explanation is there?

Movie surprisingly has some redeeming points: