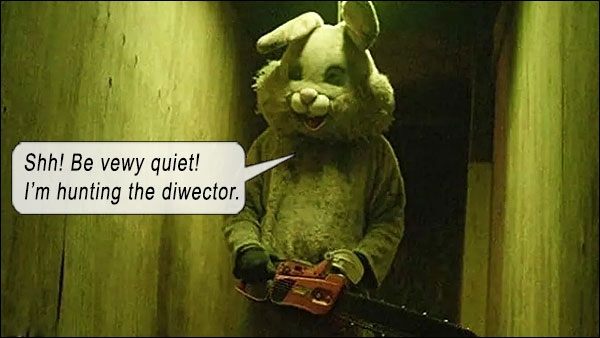 Bunnyman is back. For BUNNYMAN VENGEANCE on the people who made him Bunnyman. With a backstory and arc retconned untidily into this third bunny-bonkers slasher dumb-fest.

Writer-director Carl Lindbergh is trying (oh lordy! He tryin’!) to learn the art of filmmaking during the making of his artless films. It’s not just a bunny mindlessly roaming the American Midwest chainsawing people anymore – it’s a bunny with issues.

Lindbergh’s first two Bunnyman films (BUNNYMAN, 2011 and BUNNYMAN MASSACRE, 2014) didn’t intimate anything deeper than a slasher bunny – so we are as surprised as probably Bunnyman himself when this grand finale is set up from whole cloth, starting with Bunnyman’s origin… In the 8mm snuff-film-type footage that cold-opens all Bunnyman films, now it’s Bunny himself the victim, as we flashback to see him as a young boy burned alive by two young men (with the jankiest fire effects ever put onscreen), while another boy Bunny’s age, saves him. (But who is shooting this video? It’s got ALL angles and POVs, even wide shots. Who is running all these 8mm cameras on this attempted murder? Because later, the burners run this footage to laugh at it, which means someone filmed it and edited it together. But who?)

And even though Bunnyman lived with that redneck Joe (David Scott, who makes a dream appearance here), in this installment he is supposedly “returning home” to live with three brothers – two of whom were his burners, with the third retarded brother the one who put out the fire!

Bunny’s burners, John (Michael Shaun Sandy) and Carl (Omari Washington) now run a haunted house attraction (so far out in the sticks, we wonder how they get business), while their younger slow brother Jacob (Pucci Tres) helps with menial tasks. John and Carl are sociopaths themselves, thinking nothing of killing and eating people, yet regarding Bunnyman (whom they call “Mike”) as unbalanced. John tells Carl, “I don’t trust him. We need to keep him on a leash.” And the first question in our minds is: Why would they let Mike back into their fold anyway, knowing they tried to kill him as a kid (no reason given as to why they burned him, except that they’re sociopaths, I guess). Wouldn’t they imagine this serial killer is holding a grudge against them? This is the least of the plot deficiencies.

Bunnyman/Mike then doesn’t go about getting revenge – which is the sole reason he returned home, we presume – instead, killing a buncha other people, including kids, before passively killing the two brothers, but only because they came after him once he left their house. (Of course, Bunny had no beef with Jacob, who saved his life, so they share an unspoken bond.) We don’t feel any suspense or empathy for Bunnyman/Mike because his “vengeance” is so half-hearted. And his friend Jacob would die at the gun of John, without Bunnyman’s knowledge. Which means writer Lindbergh could have upped the stakes by making Bunnyman even madder, for his burners killing his only friend – but, uh, no. And then we see Lindbergh trying for some poetic justice as the last brother is burned alive (with the same janky fire effects).

Whereas Bunnyman would walk off into the sunset at every film’s conclusion, here he gazes at the sunset, then removes his headpiece, and walks off. This final act of exposing himself meant to signify that Mike is at last freed from his Bunnyman alter ego, that he has unburdened himself from his demons and — [blow raspberry] – If it was all about vengeance on his tormentors, giving Bunny closure, why all the other killings? While at their house, he never tried to kill the brothers, just slayed innocent customers left and right. And how does cannibalism factor into Bunny’s emotional problems? Did the smell of his own burnt flesh trigger a taste for man-meat? And why did he chill with redneck Joe for so long if revenge was his goal?

Also, removing his headpiece here undermines the other times he removed it. I kept saying in those other films, Don’t remove the headpiece, as it gives Bunnyman a cute and terrifying mystique – which would have been paid off here beautifully, but Lindbergh made Bunny arbitrarily remove his headpiece in both previous films simply because women taunted him to do it.

So the whole backstory and arc falls flatter than the Coyote with an anvil on his head. 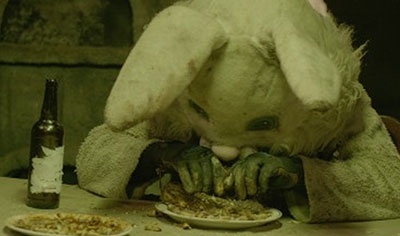 “Mmm! This tweety bird is yummy!”

BUNNYMAN VENGEANCE is the same atrocious writing and insipid directing, and absolutely juvenile blocking and staging – from the same atrocious, insipid, juvenile writer-director. Carl Lindbergh has scored much better actors here – the three black brothers, Washington and Sandy and Tres – but they are defeated by the pigslop material and sloppy editing.

Movie actually surprises us with its first sequence: a black man (Washington) pulled over by a redneck sheriff (Marshal Hilton) on a deserted road. Despite uneven audio problems, it’s actually a tense sequence, with good angles, good acting and good suspense. Then – our first sighting of Bunnyman (Joshua Lang), traipsing the desert road with a sack over his shoulder, something moving inside it. He drops the sack, opens it, and punches to death a blond boy inside it! I was loving the ferocity of this third BUNNYMAN… but then, Bunnyman tries to make the dead kid sit up in a bus stop seat, to look alive, and it’s clear the kid is well-alive as he protects himself from falling on his head time and again… But what was the point of the subterfuge of making the boy look alive? Was Bunny trying to hitch a ride? Or was he just playing with his food? There was absolutely no reason for Bunny to take the boy out of the sack. End of illusion that this was going to be a good movie…

The same sheriff happens to appear at this bus stop, notices the dead boy, and hands-up Bunnyman. From out of nowhere, the black man runs down the sheriff and yells at Bunnyman, “Mike, get in the fucken car – now!” (Mike? That’s like naming your dog Steve or something.)

“Inspired By True Events” emblazoned on the DVD cover, which is as total bullshit as the script. There’s probably some tenuous link to some backwoods killer, but really, if you expect me to research the background of this two-star movie, you’re as bonkers as Bunnyman.

There seems no purpose in any of the brothers’ killings, with the contradictory writing telling us that there could have been. For example, John is at the ticket counter reading a porn mag when two hot chicks giggle up and buy tix; as they leave, John eyes their asses – okay, so he IS a sexual being. Then why isn’t he using his abductions to satiate those desires? At one point, the two brothers and Bunnyman go out stalking five chicks camping in the hillbilly woods. Yet these chicks who are definitely Asking For It are quickly knife-killed or shot. How about releasing some of that pent-up psychosis by actually raping one of these chicks, fellas?

Then there’s the contradictory writing for their haunted house attraction: Carl is dressed as a clown (no reason) and carnival barking as if to attract people to the haunted house – but he’s speaking to people in a line for the haunted house, the one and only attraction; this is not a midway where he’s vying for attention from passing customers – they’re already here, you idiot, just let them go inside. A little boy tugs at Carl’s costume, who scowls at the boy with more vitriol than Yosemite Sam. But why? This boy is a CUSTOMER. Mother picks up the boy, “We’re never coming back here again.” Carl says, “Okay,” like he doesn’t give a fuck. But earlier, John lamented, “We’ve got a good thing going here, and [Bunnyman] is going to ruin it.” So you WANT to be a legit business? Okay, then why are you so callous toward your customer satisfaction?

Then there’s the braindead staging of the scene where a girl escapes the maze, bloodied and screaming, and shouts at the line of customers, “They’re killing people in there!” but not actually fleeing the premises, just standing behind Carl in his clown suit and shouting shouting shouting. Carl doesn’t try to shove her back inside, so as not to alarm these precious customers, nor does he try to take her out of sight to deal with her, he simply shoots her in front of everyone. The monstrous lack of all sense in this scene…

Then there’s the girl who’s screaming and puts her face TOWARD the chainsaw as it comes at her – Oh, I get it, that’s what we’d all like to do after watching a BUNNYMAN movie…

If Bunnyman is seeking vengeance on the people who made him Bunnyman, shouldn’t Carl Lindbergh be the first on his list?