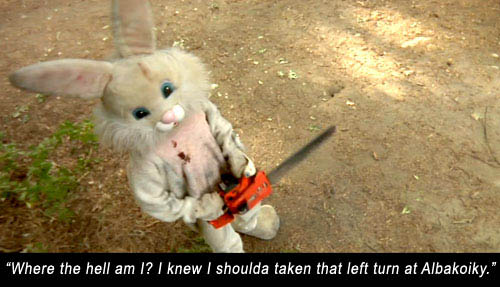 I Tawt I Taw A Puddy Twat.

BUNNYMAN will kill you with cuteness. Literally kill you.

In the middle of Nowhere, America, six abysmal actors on a road trip are stalked and killed by a guy wearing a cute bunny suit. Good.

Full marks to filmmaker Carl Lindbergh for writing, producing, directing and editing this cult slasher film, but NO marks for the finished product, which exhibits all the grace and wit of a baboon lighting its farts on fire.

I can see what Lindbergh is going for – a TEXAS CHAINSAW MASSACRE earthiness, a cheap look and feel that might somehow convey “reality,” the way TEXAS CHAINSAW did. And I commend him for the ambitious and thankless task of fulfilling all the main moviemaking roles himself, but he just does not have the talent to pull off a compelling film, as his dialogue is atrocious, and his directorial skills abominable (demonstrated especially in the execrable performances of his cast of twats); round that out with lazy editing and the film becomes unwatchable.

Movie opens with vidcam footage of a woman in a bra and shorts, bloodied and fleeing, being brutally knifed (well, brutally or humorously – you won’t be able to tell with this low level of filmmaking). The reveal of the killer comes much later, when a guy in a bunny outfit drags a girl from the back of his truck, chains her to a tree and rips her in half with his truck. (Bunnyman is played by Joshua Lang, Matthew Stiller and Lindbergh himself at times.) 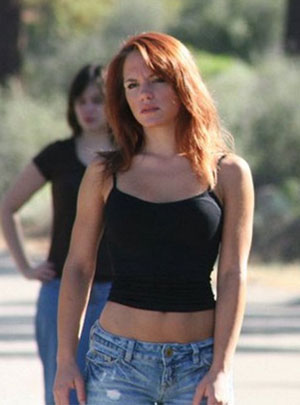 Cue the six dipshits. In a sedan. Deserted mountain highway. Led by Cheryl Texiera as Rachel and Matthew Albrecht (who looks annoyingly like a thin Chris Penn), their decision to overtake a truck with tinted windows (we would discover later it is Bunnyman driving) sets the plot in motion, as the truck comes after them in a DUEL frenzy. All they had to do was drive faster than the lumbering truck. Nope. Let’s stop and apologize. Writer Lindbergh displays his utter lack of storytelling skill by making the kids do exactly what no one on Earth would do in their situations. While watching any thriller, we always ask ourselves what WE would do, and the more that the people in the movie behave like normal humans, i.e. not like “movie characters,” the more relatable the movie is, hence the better the movie is. But these kids are written like idiots, for the illogical plot to progress. They are called upon to display complex frantic emotions, and can only manage baboons lighting their farts on fire.

Their reactions upon abandoning their car, or finding one of their clique dead, or meeting a hillbilly stranger… all just slap-your-forehead imbecilic. They walk down a path marked by upside-down crosses, and Rachel sees mesh bags hanging from trees, filled with human bones and skulls… she freaks and wants to turn back, but Chris Penn reassures her: “I’m sure there’s an explanation…” Yeh, the explanation is that the people who hung these bags are PSYCHOS, you twat! What terrible acting! What terrible plotting! What terrible dialogue! And when they meet the person at the end of the path, he looks like a psychopath and acts like one, yet Rachel brings up, “I don’t know if you know this, but there’s bags of bones down the way a little…” Is she retarded? He’s obviously the one who put them there! And when he replies with, “So?” – they should have just RUN; instead, they continue to antagonize him and demand to use his phone—by the way, what kind of twenty-somethings don’t have one phone between six of them?!

Where is Bunnyman in all this? Who knows?

The kids meet two strangers in a car, Melissa and Jacob (Lucia Sullivan and Joseph Darden) who refuse to give them a ride – for the most inane of reasons – but suggest a deserted cabin nearby, which the kids head towards, because – plot. Turns out it’s Bunnyman’s place. Of course, because – screenwriting. Bunnyman has a feral guy on a chain like a pet (because – TEXAS CHAINSAW), and he proceeds to chainsaw one of the kids, nail-gun one of the girls, and cook and eat them, with Melissa cozying up to him.

There’s no budget for explicit gore makeup, so there are lots of diversionary shots – you know, where you see blood spraying on a wall, or on a face, rather than the wound itself that is spraying the blood.

Then, in a film laden with non-talent and bad decisions, Lindbergh makes his biggest mistake – he removes Bunnyman’s headpiece! At cannibal dinner, with Feral Guy and Melissa, Bunnyman clumsily cuts his meat and puts pieces under his headpiece up into his mouth. It’s kinda cute and funny – but Melissa is having none of it, and shrikes at him to “take off that fucking mask“ – and he grunts resistance (proving that he’s pretty feral himself), but eventually relents, and removes it – to reveal a ferociously-scarred head. But he shouldn’t have removed the mask. That bunny outfit was the only redeeming factor that the director had going for his shitfest movie, and Bunnyman should have remained an enigma; removing the headpiece removed the last vestige of mystique and fun that set this film apart.

I was shocked to hear Beethoven’s Symphony No.7 in A Major as large portions of the soundtrack (I guess with no budget, public domain becomes your source.) It classes up BUNNYMAN in ways that BUNNYMAN cannot be classed up, so it’s extremely incongruous.

Last scene is irretrievably silly, “We’re safer outside the van than inside” (yes, where the killer can kill us more easily), “He’ll just run us off the road again” (because you can’t outrun a rickety truck with a powerful 4WD 8-cylinder Ram?) “We have to make a stand” (not if he can’t catch your fucking truck, you twat!)… Better to lay Rachel on the street and pretend to be dead, whereupon Bunnyman carries her into his truck, and she stabs him in the neck. Then Rachel and Penn drive off in the slower vehicle – Bunnyman’s truck – leaving the presumably injured Bunnyman near their faster vehicle, should he feel the need to recover and pursue them. First graders commend the excellent screenwriting.

Final shot: Bunnyman walking off into the sunset. What the–??!!