At times funny, at times frenetic, at times foolish, BURN AFTER READING is mostly a lost opportunity with a great ensemble cast. 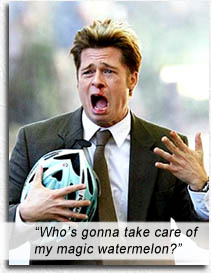 Brad Pitt is a goofball Valley Boy (ten years too old for the role), saying “shit” to his heart’s content, as John Malkovich is a recently-fired CIA agent (perfect for the role), saying “fuck” to his. George Clooney is in magnum head-waggling mode as another Coen idiot construct, an ex-secret service agent with a proclivity for surfing the web for one-night stands; Frances McDormand is a gym employee (who works with Pitt) who is looking for love in all the wrong chat rooms and hooks up with Clooney.

Each character is an extreme stereotype and the plot is woven into their lives through Pitt finding a CD left behind at the gym, which he thinks is classified CIA material. When he and McDormand trace its ownership to Malkovich and try to sell it back to him, complications arise and they end up trying to sell it to the Damn Russkies.

Turns out it’s only Malko’s memoirs, so it’s a McGuffin.

Written and directed by the erratic Coen Brothers, BURN AFTER READING loses itself somewhere amongst the many plot threads and the second act. The comedy is so black it tips into espionage, and the espionage is so moronic, we’re sure it’s trying to be a black comedy.

But then it gets too black with one sudden, accidental kill, which freezes the smile on our faces, wondering whether this kill was meant to be funny – because the character who gets it right between the eyes is completely innocent and was in the middle of a throughline.

I like shocking as much as the next nihilist, but the Coens sabotaged their own movie by wiping out this much-loved character in the second act.

I wouldn’t go so far as some reviewers to state “Burn After Viewing” – just burn the third act and excise those unfunny CIA segments with J.K. Simmons. Then we’ve got ourselves a watchable spy comedy that outsmarts GET SMART and is way funnier than QUANTUM OF SOLACE.