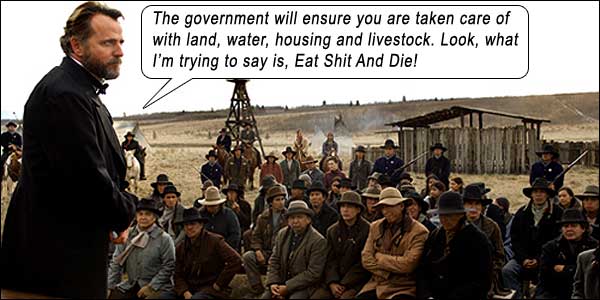 Bury the Truth of Wounded Knee.

I shall not be there. I shall rise and pass.
Bury my heart at Wounded Knee.
— Stephen Vincent Benét, “American Names.”

The Wounded Knee Massacre (aka The Battle at Wounded Knee Creek) was the last major armed conflict of what americans term the “Indian Wars” of the late nineteenth century. BURY MY HEART AT WOUNDED KNEE opens with a recreation of soldiers taking pictures of “Big Foot in Death,” one of the disturbing actual pictures in the book, taken on the Wounded Knee battlefield in 1890.

When I read Bury My Heart at Wounded Knee over a decade ago, I would never have believed that White america would have the gall to turn it into a film – and it if was turned into a movie, that movie would be diluted as a trail of tears… The latter has come to pass.

Screenwriter Daniel Giat and director Yves Simoneau deliver a film as watery as any american beer. Though it is supposedly a tribute to the indomitable spirit of the Native Americans, it is yet another White-Perspective slur-fest that dishonors that wild race with every bigoted frame. How could any movie on Earth convey the inhuman horrors of Custer’s men playing soccer with the heads of Native American children? The movie opens with General Custer’s gruesome defeat at Little Big Horn in 1876 by combined Lakota and Northern Cheyenne Native Americans – but we don’t see the heads that were just a part of the reason why the slaughter was inevitable and well-deserved. The movie ends with the grisly massacre of Lakota Sioux men, women and children at Wounded Knee in 1890. Almost as if the “Indians” got their just desserts for killing them nice soldier boys.

I rest my case.

(By the way, “Indians” is the White Eyes’ name for the Native American races. The Native peoples refer to themselves either as Native Americans or their tribe name. When the Natives in this movie call themselves Indians so offhandedly, we realize the film-makers did all their research on Wikipedia.) 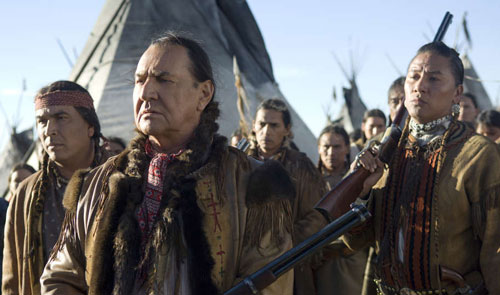 ”Oh good, here comes the Cavalry to save– I mean, RUIN the day…”

It was not bad enough to kill off the Native Americans 150 years ago, now a movie is made about that inhuman era – not to honor the Natives, but to MAKE MONEY for HBO; to pretend a spirituality, tolerance and political correctness modern americans have not the depth to comprehend.

Before we continue, let us establish that Dee Brown’s 1970 book is a disturbing, thought-provoking, well-researched masterpiece; a towering indictment of frontier america of the 1800s; a history lesson from the people who lived it, not the ones who re-wrote it. Bury My Heart at Wounded Knee is a book that scarred the self-aggrandizing perspective of a nation; recounting Native Americans’ extermination at the hands of the White Eyes and their broken promises, cowardly massacres and bloody betrayals; every single treaty between the two factions dishonored by the scoundrels who claimed birthright to a country that they knew was not theirs.

Though this gutless filmic re-imagining of Brown’s book tries hard to be compelling, it is merely a thin marketing gimmick for whatever Native American fever was doing the rounds in Hollywood at the time.

The actors do what they can with the clichéd characters they’re assigned: Aidan Quinn as the Good White Man, empowered to carve up land and herd the Native Americans out; the majestic Wes Studi, an old-school agitator; August Schellenberg perfectly cast as Sitting Bull, “the greatest living Indian”; Eric Schweig doing his Steven Segal impersonation; the magnificent Adam Beach (FLAGS OF OUR FATHERS), one step closer to some kind of acting award; Nathan Lee Chasing His Horse (evocative name, no? – he played the young Smiles A Lot in DANCES WITH WOLVES) is Sitting Bull’s son; and playing the president better than he ever could in real life, Fred Thompson as Ulysses S. Grant.

At first, the White Eyes’ grasping at real estate looks like provincialism and ignorance of different cultures (“I still believe that setting the Indians on the course to civilization best serves him”) but the Illegal Aliens (i.e. american settlers) knew full well that they wanted the land under the PRETENSE of doing a good deed for the Natives – doublespeaking it as mendaciously as the Great World Terrorist of the 2000s, George W. Bush (“We’re spreading democracy [so we’re killing them for their energy resources]”). Of course, this proud, iron-skinned people, their faces etched like rocks of ages, knew better – and also knew inherent grand truths that their White Eyes scourges could never grasp: that the LAND belongs to no one, that we are all a PART OF the land. Unfortunately, there is something stronger than pride – genocide.

Not all the stupidities in this movie are the film-makers’ or the early settlers’ fault, though. We easily criticize the film for all the Natives conveniently speaking English in current American vernacular and ooga-booga accent, which simply screams “Made For Television,” but other silliness can be attributed to the Native Americans and their own bogus “spirituality”: Wes Studi preaches that if they all do The Dance they will live forever… uh, ooookay. And I know a modern Native friend who still fasts for a week and nails himself to a tree every Tree-Nailing Season and then swears he has “visions” – of COURSE you have visions! You’re hallucinating from food deprivation and blood loss!

A stark modern analogy is made by writer Daniel Griffin on his Film As Art website that I found too compelling to ignore: [Unfortunately, Griffin’s site and this full article are offline as of May 2016.]

Do we really have any right to be surprised, in light of the Wounded Knee Massacre of 1890, that we now strap electrodes to the genitals of detained Iraqis and suspected terrorists who have not been tried?  Should we be horrified? Absolutely. Angered? Without question. But it certainly shouldn’t come as a shock that our government’s policies have allowed wiggle room for such depravity and dehumanization—we’ve been doing it since we first arrived on this continent to Native Americans, Africans, immigrants, minorities, and (fill in the blank yourself). Evil is engrained in our history, as Yves Simoneau’s profound BURY MY HEART AT WOUNDED KNEE makes absolutely clear. We shake our heads sadly at our past as if its atrocities have remained buried and left behind, but we’re certainly only fooling ourselves if we think we’ve learned to rise above it.
— Daniel Griffin

Our only hope is that viewers of this vapid HBO movie will be encouraged to read Brown’s book and perform true-hearted research into the buried heritage that the White Eyes are still working so hard to pretend to forget.