As far as I can gather from THE BUTTERFLY EFFECT’s totally illogical storyline, a teen model time travels backwards to rectify sins of the past so that in the “present” he can hook up with another teen model. 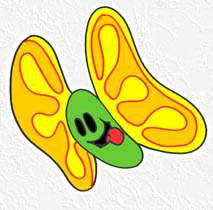 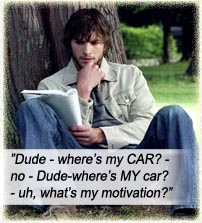 The Teen Model Effect: When a teen model flaps his arms in China, it causes a fashion emergency in London.

Ashton Kutcher courts credibility by sporting a beard that looks like the direct result of losing his shaver and sleeping in his clothes for two days. It worked for George Michael.

We must remember whom this wiffle of a movie was created for – girls. But despite its attempt to sabotage itself by casting Kutcher in the lead role, this thriller succeeds as a very effective and entertaining film. Directors-writers Eric Bress and J. Mackye Gruber move the action at the pace of a car salesman’s pitch, and twice as slick, designed to specifically deceive your brain through the muddled logic and irreconcilable paradoxes for exactly the length of the movie. After that, you’re on your own…

The actual “butterfly effect” is a chaos theory syllogism (attributed to an early pioneer of chaos theory, Edward Lorenz), which posits that “the flapping of a butterfly’s wing will create a disturbance that in the chaotic motion of the atmosphere will become amplified eventually to change the large scale atmospheric motion, so that the long term behavior becomes impossible to forecast.” (Michael Cross, Professor of Theoretical Physics, CalTech). Put more simply, “the flap of a butterfly’s wings in Brazil may set off a tornado in Texas.” (ibid.)

Consequently, THE BUTTERFLY EFFECT movie is based on chaos theory in the same way that Achy Breaky Heart is based on Bohemian Rhapsody.

But the notion the filmmakers attempt to impart is simple enough: whenever Evan Treborn (Kutcher) jolts himself backwards in time to try to change one thing for the better, to ultimately end up with his dream girl, Kayleigh (played with varying degrees of conviction by Amy Smart), his action sets in motion a wave of unpredictability for the “present” that he returns to.

Or at least, unpredictability for the principal cast. Evan, his mother and his teen friends change dramatically whilst every other person in their orbits is more or less unaffected. They don’t seem to have made any new acquaintances, business partners or lovers along the way who influenced their lives – these few teens only seem to have affected each other and the outside world just came along for the ride.

So the world DOES revolve around teen models!

Evan achieves his temporal travels by reading his childhood diaries; read a certain page with the concentration of a teen model and he is jolted back to that point in time, as per Einstein’s Theorem of Teen Model Time Travel. Upon finding a mess in the “present” after each backwards jaunt, Evan steps up his jaunts to the point where we are watching him with the expectancy of another episode of GILLIGAN’S ISLAND; that is, the serious nature of his unique power dissipates and we wonder how that crazy Gilligan is going to mess up THIS week. Ultimately, the plot goes past chaos theory and straight to chaos.

Weighted issues like pedophilia (shabby Eric Stoltz making a cameo as a child molester), letter bombs (remember the good old days when not even a bomb placed in your letterbox would make you puss out and cry “terrorist!”?), animal abuse and baby-killing keep the movie above the fluff level. Some would say below the decency level.

The kids playing younger versions of the teen models are such fine actors that, in a fit of disassociation, we incorrectly attribute their talent to the overall character of Evan, Kutcher being only the eldest incarnation, but nonetheless garnering our misplaced respect. Mediocre actor as read, there’s no doubt that Kutcher is on a different plane of maturity when it comes to his professional life: an ex-Bioengineering student from Iowa, the 6’2″ ex-model is a producer, executive producer, writer, restaurant owner – and married to the hands-down-hottest Brat Packer (Demi Moore) who was married to the hands-down-hottest action hero in Hollywood, Bruce Willis. Dude, where’s my bitchslap?

The fact that Evan does end up performing a noble deed which leaves him Without The Girl is a brave choice for a Chick Flick of Kutcherian proportions, raising the sobriety level of the film even higher. (The director’s cut inserts a very disturbing ending indeed: Evan goes back to the womb for his noble deed – how he got there, his fetus not having made any diary entries, is a question for the chaos theory mathematicians to answer. Anyone got Edward Lorenz’s number?

If taken at face value, BUTTERFLY EFFECT is a crafty, hip, infuriatingly enjoyable jaunt. If taken with a shred of logic, it retains about as much credibility as – well, Ashton Kutcher.