The more you think about him, the closer he gets. You see things that aren’t there. You don’t see things that are there. He makes you kill people. Or kill yourself. Or something else might kill you. So, basically, just whatever then…

He’s a kind of hooded specter slash reaper slash goth dude, this Bye Bye Man, from some urban legend that doesn’t want to commit to any clear mythology. And there’s this funny skinless dog or something that accompanies him, eating the dead people.

Three college kids move into a rambling old house and are haunted by the furniture scrawled with “Don’t say it. Don’t think it.” Of course, the guy who scrawled the warning couldn’t have tried too hard not to say or think it, as he has also scrawled THE BYE BYE MAN in big letters right next to the warning. Which our hero says out loud, because that’s how you read things to yourself in real life.

First of all, how can they afford to even rent this gigantic mansion? But then, a one-bedroom apartment rarely makes for good cinematic horror; you can’t have those scenes of running down long corridors chased by a person with a hammer.

Elliot (Douglas Smith), his girlfriend Sasha (Cressida Bonas), and their ripped black sensual threat to their relationship John (Lucien Laviscount) all fall victim to the Bye Bye Man’s hallucinogenic mind-games, and chase people down corridors with hammers. (Once again, a teen movie featuring a jaw-dropping perfect rendition of Woman in Cressida Bonas! Where do these chicks come from? Some Perfect-Woman farm?) 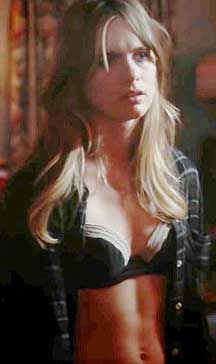 “I heard something, so I thought I’d unbutton my shirt and check it out.”

Elliot’s older brother Virgil (Michael Trucco) arrives. Know how I figured Virgil is Elliot’s older brother? Because Virgil tactfully says, “Hey, little brother!” just like we all do in real life when greeting a sibling. If that wasn’t enough to clue you in, Virgil’s little daughter yells, “Hi Uncle Elliot!” to which Elliott replies, just like in real life, “Hi, niece Alice!” Oh, for hell’s sake! (The last greeting by Elliot was in a kind of mock obviousness, as if the movie wanted to wink to the audience that even Elliot is feeling dirty over this dialogue.) If we actually examine this clunky imbecilic exchange, we can pinpoint immediately that the only dialogue necessary to establish everyone’s relationship is “Hi, Uncle Elliot.” But screenwriter Jonathan Penner thinks this movie is only going to be seen by dumbasses. If he keeps writing dialogue like that, he’s probably right.

THE BYE BYE MAN is based on The Bridge to Body Island (by Robert Damon Schneck, 2005), a collection of urban legends, the title story featuring The Bye Bye Man, reportedly a more fleshed-out and compelling tale than the half-baked idea committed to film. A prosaic result of the movie’s existence is that Schneck’s book of “Strange-but-True” tales has been renamed The Bye Bye Man in successive editions, instead of retaining its more intriguing original title.

There has to be a séance, right? Goth psychic Kim (Jenna Kanell) alerts the three friends to “something coming.”

Admittedly, there are eerie happenings in the first act – involving coins, shadows, scraping noises, seeing maggots in a lover’s hair, the flirtations between Sasha and John becoming its own intrusive subplot – but the film can’t sustain this pitch.

There are flashbacks to the 1950s, featuring Leigh Whannell gunning down a family, wailing, “What did you say? Who did you tell?” And Faye Dunaway cameos as a wrinkled widow of that man. The Bye Bye Man himself is played by the inimitable master of monster makeup, Doug Jones.

When Kim is run over by a train (caused by the Bye Bye Man’s proximity and, I guess, his magic manipulation of objects in the real world), the movie shocks us – because at last, when a train runs over someone, it actually stops, rather than keeps on driving, as it does in all Hollywood movies, with no repercussions. But here, director Stacy Title (wife of screenwriter Penner) puts in that realistic trope of a police yellow tape zone with cops milling about and Kim’s body on a stretcher put into an ambulance. Then it gets ridiculous almost immediately, with the introduction of detective Carrie Anne Moss. Probably the worst movie detective ever, as she accuses Elliot of killing Kim’s roommate with a hammer and chasing Kim into the path of the train with the same hammer – yet doesn’t arrest or detain him for questioning, just lets him wander about the site unmolested, until he runs off to go hallucinate somewhere else. Later, another detective would accuse Moss of having Elliot in her grasp and letting him go. What clued you in, detective – the limp dialogue or the insipid plot?

To stop the Bye Bye Man’s influence, Elliot’s quest – like Leigh’s in 1950 – becomes to wipe out everyone he may have spoken the name to.

Speaking of which, I’ve been saying Bye Bye Man quite a lot right here and– yup, there he is all right, standing all black and menacing in the corne—-