THE CABIN IN THE WOODS is about four painfully pretty college kids (and one Shaggy) being slasher-slain by zombies at said cabin. Seen it all before, right? But there’s a twist: the cabin is a front for a religious cult, who are in the business of luring college kids to this technologically advanced hideaway and sacrificing them to their insatiable god. Well… at least the movie is trying. Veeery trying… 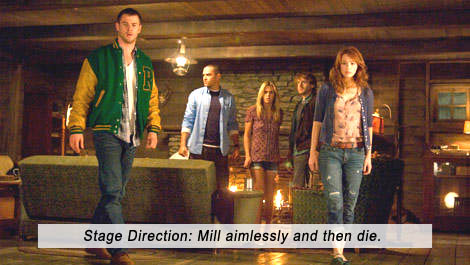 After an excellent false-opening credit sequence, we meet Bradley Whitford and Richard Jenkins, two office guys in short-sleeved white shirts and ties, around a water cooler. Cut back to – what the teen demo are here to see – a chick in panties, getting ready for a trip to the woods.

In the woods, a falcon flies into an invisible force shield, which tells us the cabin is surrounded by this unseen electric fence. Intriguing…

We quickly discover the ulterior agenda of the office guys, as they command a war room outfitted with banks of computers and monitors, showing… you guessed it – the cabin in the woods. And though they’re quite flippant about their job of monitoring the kids, they speak in more reverent tones of appeasing their bloodthirsty god. Through levers and pulleys that the cabin is surreptitiously retrofitted with, the office guys manipulate the walls and doors to lure the kids to the basement, “then we let them use free will from there.”

It’s an interesting twist on tired old slasher genre. And a peek into what modern religious cults might be doing, considering technological advances. But after the initial jolt wears off, it’s still just murders and screaming and stuff.

A guard in the war room objects to the staff gathering around watching Thor nail the naked Slut, “Do we really have to watch this?” – then doesn’t object to the horrific manner she is murdered two minutes later. I can see where he gets his twisted priorities – his sniveling mindset is the exact mindset of the idiotic Motion Picture Association of America (MPAA), who blanch at depicting all things that create Life, but have no problem rating a movie PG-13 that depicts all manner of Death.

CABIN is written and produced by the great Joss Whedon (FIREFLY), so I was expecting a little more. Still, a few good ideas with the final scenes, showing all the monsters of myth kept locked in cages under the cabin – and escaping! And when Thor tries to ride out of the woods – one hell of an unexpected demise! And I guess it’s always a plus when a culty god escapes his subterranean abode to wreak havoc on the Earth.

Which is what happens at the end, so if you’re reading this, you’re one of the few survivors on this desolate Earth.