Cable for Nothin’ and your Guilt for Free. 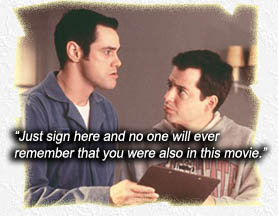 An above-average dark comedy, jealously maligned – for the wrong reasons. Incorrectly marketed, burdened by the speculation regarding the largest actor’s salary in the world at the time (to star Carrey), misunderstood by critics and panned by mongoloid fans who only wanted more Ace to sit on their face, THE CABLE GUY (at the time of its release) was routinely dismissed simply as The Film That Wasn’t Worth A Twenty-Million Dollar Paycheck.

Maybe si. Maybe no. But no one will remain on that pedestal forever, so if your agent is savvy enough, if your producers can talk a good enough game, if the marketplace will support the burden – take the 20-mil and run! Why did this supposedly capitalistic society vilify the janitor who became a comedian, the comedian who became a movie star, the movie star who defied an industry?

(Rest assured, I’d be whining along with the critics if the excruciatingly unfunny Jason Biggs was in Carrey’s shoes.)

In 2004, actors regularly draw above-20-mil paychecks because the bloated economy can now more readily support this hedonism. These actors invest one-tenth of effort as Carrey did for his role as Chip Douglas the psycho cable guy. Ironically, it is this commonality of avarice, this passé flippancy towards Hollywood’s golden-haired elite, which allows THE CABLE GUY, in retrospect, to suffer less the slings and arrows of outrage over the ‘greed’ of its leading man. 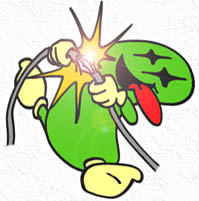 The juice is loose!

The movie and eponymous character are foreboding, blackly funny and – like Kilmer’s iconic Huckleberry Holliday – complete departures from anything anyone had come to expect from Carrey in his upwardly-spiraling comedic career; critics and fans alike were taken aback at the frightening surrealism that Carrey brought to his disturbed character. The critics were too enamored with that 20-mil to delve any deeper than his ‘offensive’ lisp, and the contingent of arse-speak fans sat by numbly, waiting for an “Allllrighty then!” which would never come.

Admittedly, Carrey’s hamming had reached King Kong-ian proportions by the time this movie hit cinemas, his two preceding films being ACE VENTURA: WHEN NATURE CALLS (an excursion to the zenith of over-enthused surfwave-smirk and ultra-over-acting) and BATMAN FOREVER (where Carrey actually saved the movie from Tommy Lee Jones’s attempt at Jack Nicholson and Chris O’Donnell’s mannequin non-presence, with his over-ultra-supra Method); one of his lines in BATMAN summed up what many perceive as Carrey’s shortcoming, when his Riddler character says, “Was that over the top? I can never tell!” Audiences expected that slam-hamming to be carried over into CABLE GUY, and the misrepresentative trailers didn’t help. Not having a convenient hole to pigeon the movie, the trailers advertised it as a simple comedy, and critics roundly dismissed it as unfunny, too dark, puzzling…

But here’s the clincher – when Carrey played those over-the-top outré-hams in previous films, they stoned him for it; denigrating him as if from thrones of thespian munificence, yet when he subtly alters persona to portray a character more complex than the hams, suddenly they don’t want him to change, because it taxes their stunted filmic vocabulary to have to think about The Cable Guy’s layered personality.

Watch for Owen Wilson (at the time, not yet The Nose That Saved Hollywood) as the insincere date; Bob Odenkirk, Andy Dick and Janeane Garofalo (Stiller’s Posse), Jack Black (only hinting at the Tenacious within) Kyle Gass (as the Couch Potato!), Leslie Mann as Broderick’s girlfriend, Eric Roberts (in a screamingly-funny self-parody), George Segal (“Are you on the pot? You know you’re killing your mother!”) and director Ben Stiller himself, playing twins, parodying the Menendez Brothers TV murder trial/fiasco (“The killer was – Aaaaaasian!”).

The makers of THE TRUMAN SHOW (1998) would learn the lesson in not marketing that film as a “comedy,” thereby allowing Carrey’s acting prowess to shine, unburdening themselves from the pressures of public expectation. Indeed, THE TRUMAN SHOW is an extension of THE CABLE GUY’S themes of alienation, false perception, reality misapprehended. That film’s deeper psychological impact was so pronounced because we were now seeing Carrey as an Actor (not a comedian or overpaid janitor) in a role which extended the Cable Guy’s predicament to seeking not only friendship – everyone in town was “pal” to Truman Burbank – but sincere friendship. Truman, like the Cable Guy, was a victim of illusion.

So now that I’ve gotten that bitching off my chest, I wonder what’s on cable tonight?… I’ve got ALL the movie channels. Free. My Cable Guy is bringing the ice cream, his favorite flavor: man-crush…