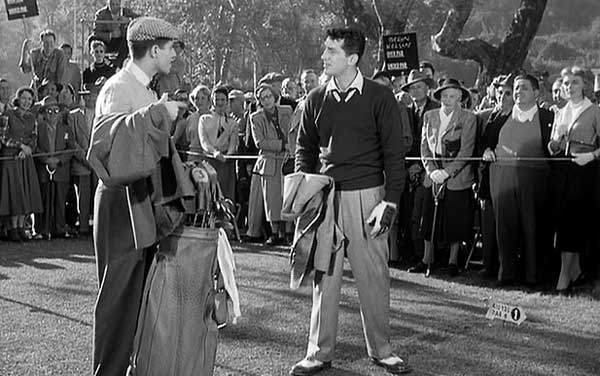 “At first I thought I was the handsome one – then I saw how much I was carrying.”

The Gulf between Golf and Guff.

A talented golfer and his equally-talented yet disruptive caddy enter golfing tournaments and end up in comedy. Kinda like Tiger Woods.

THE CADDY opens with massive crowds jamming the streets of New York. They’re all cheering at something high in one of the hotels lining the street. Flyers are seen fluttering down onto the throng. It looks like stock footage of Beatlemania. But it’s real footage – of the hysteria caused by Dean Martin and Jerry Lewis when they were the kings of the comedy nightclub circuit in America.

We cut away to a closeup of Joe Anthony (Dean Martin) and Harvey Miller (Jerry Lewis) hanging out a hotel window, greeting the masses and throwing out headshots of themselves. This is filmed footage for this movie; these guys are THE in-demand nightclub team, just before another sold-out show. Joe’s mama and papa are backstage, and as the dynamic duo head onstage and perform a simulacrum of their real-life song-and-dance-and-madness act, dueting and soft-shoeing What Wouldcha Do Without Me?, Joe’s papa (Joseph Calleia) tells a reporter the tale of how the two became such superstars… 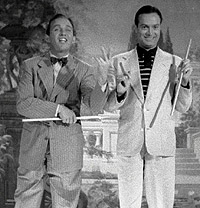 Before we proceed with THE CADDY, it must be noted that Dean and Jerry were not the first to promote that raucous nightclub act of songs-sprinkled-with-comedy. In 1932 Bob Hope and Bing Crosby were accidentally paired onstage and started doing a form of Vaudevillian singing-and-ad-libbing; Crosby the crooner and Hope the ad-libbing animal. It was a hit, but it was just a lark that was never pursued. In 1940, their chemistry was captured in the first of seven ROAD films, ROAD TO SINGAPORE.

Yes, Hope and Crosby pioneered the form (and it was slightly more cerebral than Martin and Lewis’s version, which was more dependent on Lewis’s slapstick), but Martin and Lewis made that singing-and-gagging format theirs, in their irrepressible live shows, bringing an unbridled fury and physicality to the stage, never before seen by audiences used to crowding around the radio for their entertainment. They were The Rolling Stones to Hope-and-Crosby’s Beatles.

Also, I don’t say “slapstick” in a derogatory sense. Martin and Lewis were a fine-tuned machine: each gesture, each pratfall, each hand-into-the-mouth, each grope-across-the-chest, each jump-into-the-arms is a practiced art. When their act made the leap to movies, Jerry himself professes they would rehearse so solidly that their lightning-strike timing usually necessitated just one take. Rather than let cinematographers bully them into second or more takes due to missing lines in a boom mic, or because the lighting wasn’t good upstage, etc., they argued that the energy and urgency of each take could not be replicated, so we are usually seeing the first takes of their routines!

… THE CADDY jogs into flashback, showing Harvey (Lewis) as a prodigy golfer, yet unable to play in tournaments due to stagefright. His fiancé Lisa (beautiful Barbara Bates, who resembles Paulette Goddard in a pointy bra) suggests he become a golf instructor instead. Lisa’s prodigal brother Joe (Martin) returns home from wandering the country. Upon realizing Joe is a gifted golfer, Harvey suggests Joe enters tournaments, with Harvey as caddy.

For playing hooky to go watch a golf tournament, Harvey and Lisa are fired from their department store job, in a slapstick sequence that features intrepid character actor Fred Clark as their boss. (Clark would soon play the newspaper editor in Martin and Lewis’s classic, LIVING IT UP.) And Joe doesn’t want to return to work on his father’s fishing boat. So golf it is. 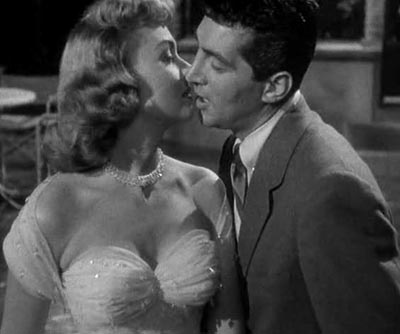 Kissing without hands: hard, but not impossible.

This would be the first Martin & Lewis film where Dean embraces his Italian heritage with such verve. Up to this point in film, his Italian background is merely referred to, but here, his parents are Old Country and (with the help of Jerry and his family) he croons his most memorable, most Mediterranean song, which cites the Italian word for love – That’s Amore. (Nominated for an Academy Award for Best Original Song in 1953, it would peak on the Billboard charts at #2.)

We sense a real camaraderie between Dean and Jerry in this film. They seem to be getting closer. So we are stunned when their “breakup” also seems so real. After hitting it big, Joe starts treating Harvey like the help, ignoring his advice, running off with a girl (Donna Reed as Kathy), giving up practicing, and giving up golf; almost like he wants to return to his wasteful life on the road. Not since their fifth film, THE STOOGE, has Dean’s venom seemed so biting. Now we realize why director Norman Taurog started the movie as he did: If we had not seen Joe’s and Harvey’s success, this breakup might have left a bad taste in our mouths. But it’s simply a testament to how convincing Martin and Lewis are as dramatic actors; they know when and how to make it hurtful. They are never given enough credit for this side of their talents. (As it is, the REAL breakup is a mere three years away; it just seems longer, because they cranked out 16 films in a 7 year period.)

Harvey does a solo song, The Gay Continental, while he dons his sophisticate demeanor to infiltrate the yuppie country club where Kathy has taken Joe for a forbidden week of pointy-bra undoing.

Golfing is a hobby that is obviously dear to our stars’ hearts, and I can see how scoring cameos from famous golfers of the day (like Ben Hogan, Sam Snead and Byron Nelson) might gladden some fans’ hearts. But I don’t care.

Due to Harvey’s constant haranguing, Joe is disqualified from the tournament circuit, but all through their golfing stint a rotund agent has been witnessing and guffawing at Joe and Harvey’s comedic interactions and advises them to go into nightclub entertainment. Which they do, because apparently nothing clears up stagefright better than being a caddy.

In the final scene, when our heroes Joe and Harvey are coming offstage to raucous applause, after reprising an energetic What Wouldcha Do Without Me? (but now, poignantly, reworded to, What Would I Do Without You?), they run into – Dean Martin and Jerry Lewis – in a split-screen cameo that is awesome for its day.

And in their real guises, it’s nice to see Dean and Jerry exchange some real friendly repartee, as they see their stage personas walk off with their dolled-up dames (Dean: “How lucky can two guys get?” Jerry: “Yeah, we got it real bad, ain’t we, Dean?”); real respect, real love. If only…

SONGS (by Harry Warren, Jack Brooks)
• The Gay Continental (Jerry)
• It’s A Whistlin’ Kinda Morning (Dean)
• (It Takes A Lot Of Little Likes To Make) One Big Love (Dean, Jerry)
• That’s Amore (Dean, Jerry)
• What Wouldcha Do Without Me? (Dean, Jerry)
• You’re The Right One (Dean)