Yes, I know CADDYSHACK has entered the vernacular as a comedy classic, but it’s about as boring as watching golf. And whadaya know? – It’s about watching golf! 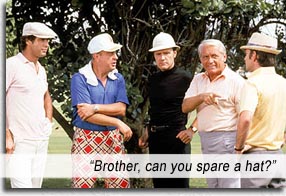 Directed by Harold Ramis, written by Brian Doyle-Murray, Ramis and Douglas Kenney, starring Chevy Chase as a smart-mouthing rich golfer, Bill Murray as a harelipped groundskeeper, Rodney Dangerfield as a muckraking loudmouth, Cindy Morgan as the blond skirt, Ted Knight as an eccentric judge and Michael O’Keefe as a vanilla caddy who looks like Leif Garrett, CADDYSHACK is poorly-constructed, badly-directed, adequately performed… and it’s about GOLF!

Seems the whole production is trying too hard, as plotlines intertwine and step all over the main throughline of caddy Danny (O’Keefe) saving up for college (we presume to escape the drudgery of an overcrowded family life which is shown in the film’s first minutes and then never seen again); trying too hard with one-liners that don’t quite pop (“Pick up that blood,” “Just be the ball, be the ball, be the ball. You’re not being the ball Danny,” “What brings you to this nape of the woods, neck of the wape; How come you’re here?”); trying too hard with cramming love triangles into a story full of squares.

Chevy Chase tries on the deadpan, and realizes he should leave it to John Cleese; twitchy Rodney Dangerfield cuts loose with his one-liner lounge act and scores some winners amongst the stray balls; Cindy Morgan takes her panties down perfunctorily, realizing that’s all she’s here for; ad-libbing Bill Murray has a vendetta with a wily gopher on the greens (which is the only passable running gag in the movie; it is so obvious the gopher is a toy being moved by offscreen hands that we give it a pass for the audacity of the movie makers); and young O’Keefe pretends he has a sparkling movie career ahead of him by sticking to the mundane plot. Lucky for him, he didn’t.

And Kenny Loggins sings that song that sticks in your head like a highway to the danger zone.