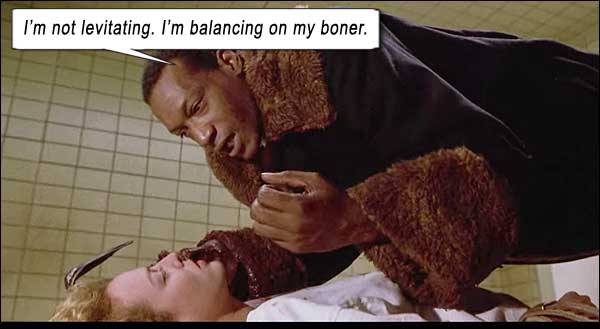 Bad movie with a good hook.

Say it five times into a mirror and Candyman appears to kill you. Unless you’re Virginia Madsen.

Madsen is Helen, doing a thesis on urban legends. She is told the Candyman myth – of the tall, black, gravel-voiced phastasm, with a hook for a hand and a pimpin’ longcoat, who disembowels you upon summoning him – then recites his name into a mirror to debunk it.

Well, Candyman (Tony Todd) does, in fact, appear much later (no reason given for the delay – maybe it’s a black thing? D’oh!), yet Helen keeps escaping his flesh-stained hook-hand. Because he’s hot for her flat white booty it seems. The filmmakers (writer Clive Barker and director Bernard Rose) try to conjure the same sentiment as BRAM STOKER’S DRACULA where Gary Oldman’s Count “crossed oceans of time to find you,” as we see Helen’s visage in some old painting in Candy’s dungeon… but the concept is completely mismanaged in this mediocre production. And Tony Todd ain’t no Gary Oldman.

Considering that Barker co-wrote this screenplay with director Rose, from his own short story The Forbidden, it’s not transferring well to the screen. Yet the movie adds more hook to the story (see what I did there?), like the iconic ‘saying the name 5 times,’ and ‘in front of a mirror,’ with backstory added that Candyman was the son of a slave and a painter.

And that was the greatest gambit that endeared CANDYMAN to African-Americans in the United States. The story was originally set in Liverpool, but Rose envisioned it in Chicago, so based it in the real life Cabrini-Green housing projects, with a backstory of Candyman’s first victim being named Ruthie Jean (inspired by real life victim Ruthie Mae McCoy, killed in a Chicago housing project when her killer entered through the back of her bathroom’s medicine cabinet – which is how the ‘mirror’ element was inspired).

So black viewers identified with this black supernatural villain (especially with him trying to nut a blonde), and the movie has become somewhat iconic. In retrospect, it looks dated; produced around the same time as DARKMAN (1990), it shares a kind of insipid color palette and the residue of 80’s modality. Also, Madsen’s constant smoking is making me hoik. (She sits at her desk, lights up a cig, glass of wine – lights up a cig, giving a report to the police with her eye bludgeoned – lights up a cig. It’s more horrifying than the Candyman.) And the efx are chromakey, especially an opening shot of the city swarmed by bees, which only added cheapness to the opening unnecessarily.

Helen has a passionless relationship with her husband (lackadaisical Xander Berkeley), who is probably plonking his 16-year-old sociology student. Honestly couldn’t tell. Was Xander lying about his affair, or is he acting so badly that we think he’s telling the truth? When someone says, “You’re my wife and I love you dearly…” that pretty much means the opposite, no? Is he trying to act like he’s reading this line for the first time, or is he actually nervous that she’ll discover he’s lying? Or – here’s a novel approach – does he really love her dearly despite the robotic line-read?

With the Candyman legend rampant in the projects, Helen scares up her black friend (Kasi Lemmons as Bernadette – she was Jodie Foster’s FBI pal in SILENCE OF THE LAMBS) and rolls into the ghetto looking for clues, dressed like a whitegirl aching for BBC. She befriends a black single mother (Vanessa Williams) with a small child and a dog. When Helen visits this woman a second time, Candyman appears to her – but doesn’t kill her. Instead, hypnotizes her, beheads the dog, wounds the mother and kidnaps the kid, then frames Helen for the madness.

Whaa–? I think black people have been telling you this legend all wrong, whitegirl. I mean, the dog never said “Candyman,” five times. Later, Helen would be out on bail, Bernadette comes over. Candy appears – and doesn’t kill Helen. Instead, kills Bernadette. Really? She never said Candyman five times either! Helen made to look like Ted Bundy, waking in a pool of blood with a carving instrument in her hand.

In restraints, Helen is brought before a police psychologist. To prove her innocence, she tries to conjure Candyman from a mirror. Sure enough, he appears – doesn’t kill her again! Instead, hooks the psychologist through the spine and frees Helen. Alarms go off throughout the police station, which means the psychologist must have had his spine connected to the alarm system. I can think of no other way the alarms would start one second after he is stabbed.

Helen performs a Movie Escape (knocking out a nurse and taking her uniform), flees home, to find Xander plonking the 16-year-old (so he was lying! Okay, got it: bad actor). She somehow figures that Candyman is holding Vanessa’s kid hostage, forcing her to come retrieve it. Can’t really figure the endgame: is Candy going to woo her with a candlelit dinner of braised dog or something? I dunno, I don’t think even Candy thought this out too well… 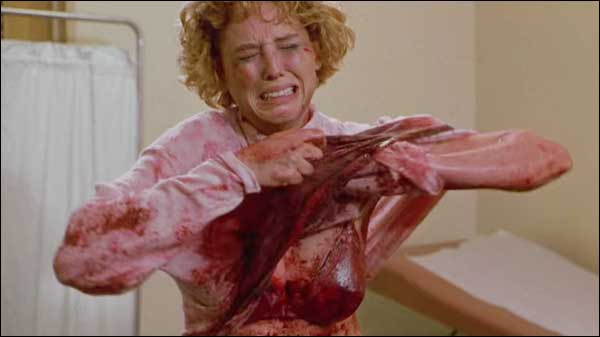 They say you never forget your first time.

Director tries to create some ominous sequences (Bernard Rose just directed UB40’s Red Red Wine video – 2 years later he would direct the magnificent IMMORTAL BELOVED), but the mythology is just too scatterbrained and – What’s with all the talking, Candy?! Too much qualification on why he’s not murdering her. The more he talks, the more UN-scary he becomes; he starts to sound like a dude saying anything just to get into a chick’s pants. Which he is.

So is Candy caring for the baby now? Feeding it, changing it… I think this legend needs some revising: “And if Candyman likes you, he’ll kidnap someone else’s baby to lure you into rescuing it; he’ll feed it and play peekaboo with it so it doesn’t give away his location by crying…”

In a badly-staged climax, a stuntman in a blond wig climbs into a garbage heap in the middle of the projects—oh wait, it’s meant to be Helen, looking for the kidnapped kid. The ghetto residents mistake her for Candyman (see? that stuntman shoulda worn a sexier skirt) and set the garbage on fire. Although, I don’t know how they hope to burn this entity that could teleport supernaturally through mirrors. Speaking of which, Candy has teleported inside this heap to threaten Helen (make up your mind, brah! Are you propositioning her or terrorizing her?), and somehow when she hits him with a burning timber, he stands there and screams instead of teleporting somewhere else. Helen grabs the kid and crawls out, and – I dunno – keeps distracting Candyman by hitting him so that he wouldn’t teleport out of the fire? What are the rules? Anyway, it’s explicitly shown that Candy dies, and the stuntguy in the wig dies as well—I mean, Helen.

The whole black community turns out for her funeral, all late of course, because – black. (Now it’s getting downright racist.)

Xander, now living with his snarky 16-year-old who can’t cook but has great tits, looks into a mirror in grief and moans for “Helen” – and after five moans, Helen appears (!),  crispy-burned, with a hook, and disembowels him. Because adultery is a killable offense, right?

Hey, it works! Hold all my calls… Her hook just makes it hotter…