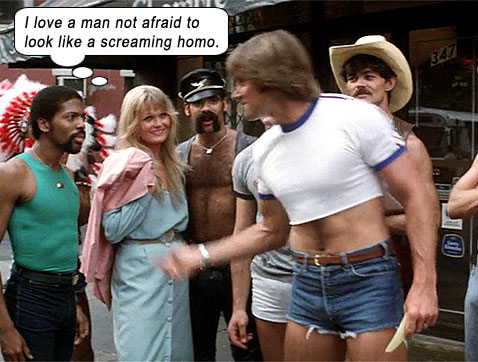 I can’t unsee this travesty. Or is CAN’T STOP THE MUSIC a biography? Formed by an overacting douchebag, named by an old woman, promoted by a slut ex-model, and none of them gay – nope, not gay – definitely not gay or anything – the Village People do one rehearsal in a backyard with backing tracks and then become stars. It must be a biography.

An opening sequence unrepentantly structured to emulate the iconic opening scene of 1977’s SATURDAY NIGHT FEVER (with Travolta strutting the Noo Yawk streets), except this time it’s Steve Guttenberg (oh my God! Right there, I almost fell asleep) in an eye-straining triple split-screen, in pants that are having a fashion heart attack, with an uninspiring disco song inspiring dance moves from him that only a bi-curious man would consider acceptable… on roller skates.

You lost me at overacting douchebag.

Has Steve Guttenberg atoned for this yet?

Steve Guttenberg is Douchey Buttknuckle, who will make you ask, as his overacting pushes over your chair, “Just how can anyone be that gay without being homosexual?” He is roommate to Slutsy McTitsforbrains (Valerie Perrine), whom he never bangs. Yup, homosexual. Their neighbor is the Indian from the Village People (Felipe Rose) who never wears a shirt and barely wears his cutoff denims past his second last vertebra. I lost count of how many times I saw his crack.

Douchey is a DJ, gets a gig at a major dance club, and he’s over the moon as he says, “I’ll be able to play my music–” [needle scratch] Whoa, hang on sparky! Did you just say, “YOUR” music? You’re a frickin’ disc jockey. Well, apparently this chic dance club does allow DJs to play tapes of their original backing-tracks-without-vocals to the obviously ‘shroomed dancers, one of whom tells Douchey, “Hey man, you sound terrific!” McTitsforbrains chimes in: “You were wonderful! You should be recorded! Let’s make a demo tape and we’ll take it to a record company!” I thought this WAS a demo tape… Yep, definitely on ‘shrooms…

They don’t advertise, yet get enough “singers” to attend their backyard audition/ rehearsal/ grab-ass/ barbecue to “form a band,” which they call Touch My Bottom Please. (Luckily they scored the mighty vocals of Ray Simpson, the only legit member of the band, replacing the equally mighty and recently departed Victor Willis.) They would later change the name for various legal reasons.

They promote the band to CEO Paul Sand, in an eccentric performance being besieged by telephones, which is quite funny because it belongs in another movie. He’s not impressed by their flagrant abuse of twerking and leaves, only to be pursued by McTitsforbrains who implies she’ll fuck him if he’ll give Touch My Bottom Please a record deal. He complies, and she’s ecstatic, proclaiming, “I used my brains and not my body! Do you know what an accomplishment that is?!” Which ironically proves she has no brains, if she thinks that extorting a record deal for sex is not using her body.

Lulu (Marilyn Sokol) looks like Tim Curry as Dr. Frank-N-Furter. Does the Indian only come onto her because she looks like a Sweet Transvestite?

Bruce Jenner is the 1976 American Olympian Decathlon gold medalist, and no actor. Somehow he plays a lawyer here who plonks McTitsforbrains when she isn’t looking. And credit must go to him when, even surrounded by The Village People, he manages to look like the gayest man in the movie. Except in the YMCA song sequence, where for one shining moment we see him at his best – being an athlete – in what is apparently a nude men’s club aka a gym.

It’s a pity that the movie features such forgettable disco tracks, and doesn’t include many of the Village People’s most memorable guilty pleasure songs (no Macho Man, Go West, In the Navy, etc.) We do get Magic Night, Milk Shake, Liberation and Can’t Stop The Music.

And in a nudge-nudge sequence that puts the gay back in gaywad, their biggest hit, YMCA, is performed in a gym featuring full-frontal muscled swinging dicks. Look for the uncut version. And by uncut, I mean penises, of course. (We also get Valerie Perrine’s tits to equalize the sausage-fest. Doesn’t work.) In retrospect, we all know the Village People stand for Out-and-Proudness, but back in 1980, The-Lifestyle-Which-Shall-Not-Be-Named was only allowed to bubble under the surface, so the movie is quite hetero-aimed. At least, it likes to think it’s hetero-aimed, but who are they foolin’ with that gym sequence? TOP GUN called and wanted its homo-eroticism back.

Amidst a sea of tiny pants and cringeworthy acting, there is a powerful performance by the 3-female black vocal group, The Ritchie Family (not related to Lionel or Blackmore), a group wrought by the Village People’s creator/songwriter Jacques Morali; in one song, oozing more testosterone than all 6 members of Touch My Bottom Please combined. Steve Guttenberg is meant to represent entrepreneur Morali in the film. Or someone with a fist up his butt.

Now go. Go become one of the worst films in music history, critically and commercially a failure. You truly deserve it.

But first, put on some pants!