CAPOTE, first of all, is not a biopic. It covers a short period in writer Truman Capote’s life when he immersed himself in his classic True Crime novel In Cold Blood, the first “non-fiction novel” of its kind. Published in 1965, this revolutionary book would make Capote the most famous writer in America. And it would suck his soul bone dry, as he never completed another novel before his death in 1984. 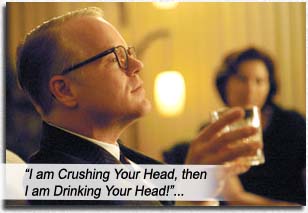 Directed by Bennett Miller, CAPOTE follows Truman Capote (a trimmer Philip Seymour Hoffman, putting on that outrageous accent and playing fruitier than even his drag queen in FLAWLESS) as he interviews the two killers of the Clutter family in Holcomb Texas in 1959, Richard Hickok (Mark Pellegrino) and Perry Smith (Clifton Collins Jr.). He lightbulbed on the idea of a book which would reveal their psyches, as well as the reactions of the townsfolk and the detectives who eventually caught the two killers, led by Alvin Dewey (Chris Cooper), but didn’t bargain on the research being a heart-sickening exercise that would take nearly six years of his life, test his skill as an author and his very humanity.

This movie is not taken from Capote’s book In Cold Blood, but rather from a section of the book by Gerald Clarke, Capote: A Biography, written for the screen by Dan Futterman.

Viewing CAPOTE or reading In Cold Blood reminds us of that scientific precept that states you cannot observe a system without becoming a PART OF that system and thereby affecting the outcome of your observations.

Upon inserting himself into the story, by becoming so close to the killers that he actually hired powerful lawyers to appeal their cases to the Supreme Court, Capote affected the outcome of his novel; a tale that would keep stretching into the future with no end in sight, because he envisioned the hanging of the killers as closure.

Capote (author of Breakfast at Tiffany’s, 1958) was completely stymied on how to psychologically deal with this new form of fiction he was pioneering; he found himself split into two mental halves – one half empathizing somberly with the quadruple-murderers, while the mercenary side of him surreptitiously picked their brains for book material. Though he admitted a kinship with Perry Smith (“It was like we were raised in the same house, and one day he got up and walked out the back door, and I walked out the front”) he would continually lie to him about the book’s details.

After four years of stays of execution, it was Capote who was having nervous breakdowns because the killers were not being executed. Ergo, his book was in limbo, remaining unfinished. When Smith pleads with him to acquire another lawyer, Capote writes back tersely that he cannot find one. It’s a morbid conundrum, as Capote finally wants them dead and so must remove himself from the equation.

Catherine Keener plays Capote’s childhood friend and confidante, Nelle Harper Lee, whose own book, To Kill a Mockingbird, is published during this period. Only she can tell him truths about himself with impunity.

One of the best features of this movie is that, while Capote was openly gay, he is never turned into a punchline – not by the high society depicted in the movie or by the makers of the movie. He lived with his gay lover (Bruce Greenwood) with no ostracism from the entertainment world. Though he was renowned as the life of any party, we only see snippets of his gregarious night life in CAPOTE.

Movie is slow-moving but not boring, rather, introspective and disturbing. When Perry is eventually hanged, Capote’s tears are not so much for the loss of the man whom he had grown close to, but for the fact that Capote himself could have stayed that man’s execution indefinitely if he had chosen to invest in more lawyers; his tears are rage against his own selfish agenda in wanting to complete his book.

Capote expressed no joy at the publication of In Cold Blood, feeling like his soul was sold for its research.

We feel just as soul-spent by the end of this dark, somber film.