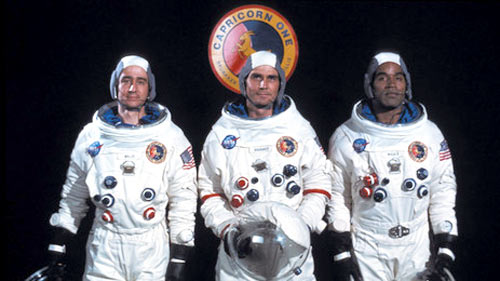 “Yes, Officer, third from the left. That’s the man I saw with the bloody gloves getting into the white Bronco…”

As a child in Australia, I remember seeing posters for CAPRICORN ONE: the visage of the lone, space-suited astronaut, movie title scrawled across his glare-shield. Something foreboding and sobering about that poster had me believing (as I attained full cucumberhood) that the film was one of the all-time greats, placed alongside A CLOCKWORK ORANGE, or PLANET OF THE APES, or SEVEN SAMURAI; a movie that rankled sensibilities and incited societal disturbance… Upon recently viewing for the first time this insipid, miscast, paranoiac, clueless attempt at professional film-making, I now realize it would more suitably rank alongside ERNEST SCARED STUPID, or THE CREEPING TERROR, or GAMERA VS. GAOS.

The concept might have been brilliant, were it not for the dogged naïveté exhibited by the screenwriters and technical personnel, all of whom, it is patently obvious, have never even push-buttoned a blender from Wal-Mart, let alone worked or even been allowed near the fail-safe redundant systems inherent in the NASA space vehicle program. 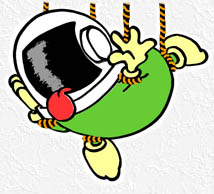 A manned mission to Mars is subverted by the very organization that launches it – NASA. Apparently, the Mars capsule’s life-support system would have failed, killing the three astronauts (a boring Sam Waterston, an ineffectual James Brolin and an as-yet-unindicted O.J. Simpson). In an inspired asinine turn, instead of mathematically proving that they had the grounds to sue the vendors who created the faulty system, NASA executives decide to waste incalculable time and energy on staging a fake landing on a studio set, in order to keep receiving funding for the mission; duplicity which doesn’t rectify any problems, save any money, or justify any effort, whilst confining the astronauts against their will, away from the public, for the duration of the “mission.”

The ruse goes swimmingly – with Earth’s media actually buying the fakery, which begs a treatise on stupidity at least as extensive as an Encyclopedia Britannica 24-volume set – until the returning Mars rocket explodes on re-entry and NASA realizes that, in order to continue the ruse, the astronauts have to “disappear” – but now NASA’s going to kill them themselves! ‘Twould be bittersweet irony if it weren’t so damn retarded.

The underlying motive behind all government collusion of this ilk is that massive profits be gleaned from the deception. But even with the aforementioned funding, the cover-up costs alone for such a slipshod conspiracy’s execution would far outweigh any reimbursement brought about by legal income. And that’s considering that the cover-up was a success – the fake mission itself was so sophomorically staged that it could’ve been picked apart by any first-year actor pretending to be a lawyer in any court of law at any time.

Writer-Director Peter Hyams‘s story-telling incompetence is astounding to behold: to fool the whole flight-ops crew and the media into believing the mission is underway, the conspirators “replay the radio transmissions of the astronauts’ recorded trial runs over the intercom.” Would this fool anyone remotely cognizant of human communication, let alone every single veteran technician in constant contact with the Mars spacecraft? Hyams likes to think we’re stupid enough to believe so. Hal Holbrook (as the NASA executive helming the conspiracy) almost seems embarrassed when he voices this idiocy.

Conspiracy Theorists must have thrown a week-long booze-up when this movie hit cinemas, cries of “We told you so!” reverberating off their Lonely-Guy hobbit-hole walls, postered with tech specs, affidavits, diagrams and blurry photos all “proving” that the Moon landings were faked as well.

Hyams’s decision to place NASA – one of the few truly respected, sorely under-funded, genuinely intellectually adroit institutions on earth – at the heart of this conspiracy is defamation of the highest degree. And then (like the Moon-Fakers) to afford them not one jot of respect, by performing exactly zilch amount of research in the field of manned space missions. Technical malfeasance is elevated to the status of a “given,” as scene after scene insults audience intelligence by trying to sneak in any budget generic hardware or scenery or gadget that looks “scientific” and by sprinkling the dialogue with any technical terms that sound scientific to further the ill-contrived illusion. Trust me – it’s all bogus. There is no single area where one can begin to effectively critique the lack of dedication towards any kind of plausibility which would lever this film above that of cack wedged between the treads of my shoe.

The most dangerous aspect of a hideously-deformed piece of trash like this film is the overwhelming sludge of misinformation it purveys. Use the time you would have wasted on this movie reading a book by Carl Sagan or Richard P. Feynman. Not only will you be more entertained – ya might jess learn yaself sumpin’.