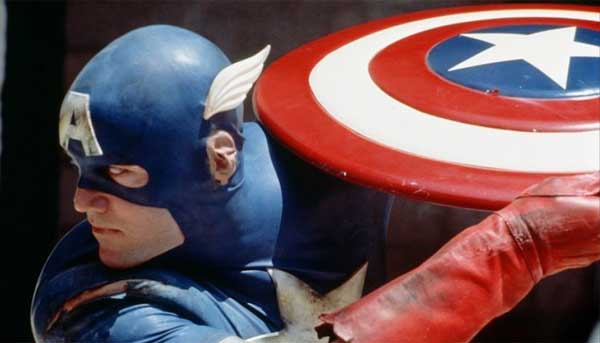 The red, white and blue avenger – ready to serve up Justice. Or hors d’oeuvres.

Shield us from this movie!

They tried to fix Captain America in 1990. And failed a third time.

During WWII, a young man named Steve Rogers is transformed into “Code Name: Captain America” through super soldier serum. Wearing a costume that looks suspiciously like my dominatrix’s bondage-rubber piss-suit, he battles a Nazi created with the same serum called the Red Skull, and is inadvertently frozen in Alaskan ice for 50 years, until he emerges in the ‘90s to battle the same Red Skull, grown suave and closer to world dominatrix—I mean, domination.

Captain America’s onscreen debut was in the 1944 serial CAPTAIN AMERICA, which sullied his heroic image by ignoring canon and casting a doughy guy in the titular role who had zero reason to be Captain America. Non-actor Reb Brown’s 1979 TV movie CAPTAIN AMERICA didn’t help. Now comes this third filmic iteration, the Marvel Entertainment Group re-launching the Captain with an origin closer to canon (yet still weirdly misshapen), some half-decent actors and a wide-ranging story, in a seemingly sincere feature film that nonetheless ends up so cheap and mediocre it went Direct-to-Video upon its release. 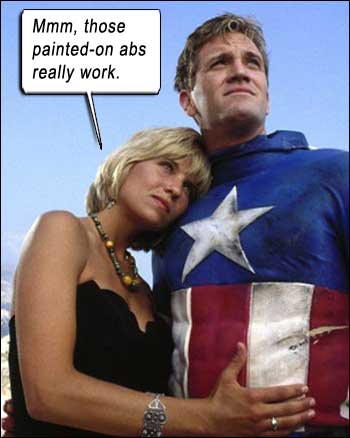 Matt Salinger is the new face of Steve Rogers/aka Captain America (yet still weirdly misshapen), with striking seaside-vacation eyes over a flattened nose that looks like his bondage rubber is stretched way too tight and he can’t breathe. Call me racist, but a guy named Captain America should ideally have more of a Greek or aquiline nose, no? The son of enigmatic Catcher In The Rye author, J.D. Salinger, Matt comes to the legendary character with a powerful résumé that includes REVENGE OF THE NERDS and not much else.

Ronny Cox (DELIVERANCE) is President Kimball (who maintains “to this day, the finest script I have ever read . . . how those guys messed that film up, I will never know”). He is kidnapped by the Red Skull and threatened with sitting in a comfy chair, before escaping the Skull’s generic mobster guys with the help of Captain America and his presidential retinue of generic army guys.

Ned Beatty (who was teamed with Cox in DELIVERANCE) plays a reporter friend to the president. He must have figured: Well, SUPERMAN turned out well. Why the hell NOT do another superhero movie?!

Darren McGavin is the traitor American General, usually a staunch, raspy presence, but here phoning it in. Funniest part of his performance is – Will Robinson! Yes, Bill Mumy actually plays the Young General. People wonder why this guy who did such a good job as a child actor on LOST IN SPACE faded into obscurity. Watch this performance. See why. 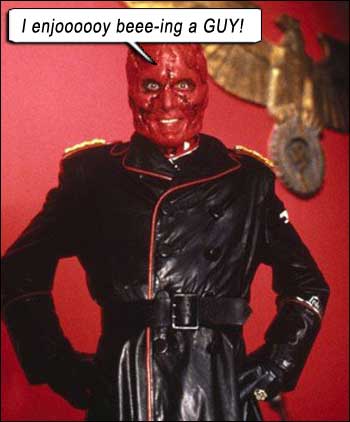 Scott Paulin is Red Skull, a reasonable villain once he finds his feet as a modern Italian Mafioso—what?! Yes, Red Skull from canon ran the Nazi offshoot organization Hydra. Here, the writers place him in an Italian villa with Fabio-like bodyguards; beyond that, I didn’t pay attention. His first scenes feature his face still forming, like a melting gummy bear. As a boy, his character was kidnapped for his intelligence and injected with the super serum in Nazi Germany.

The German scientist who created the serum for the Nazis, Dr. Vaselli (Carla Cassola) is remorseful over the kidnapping, and defects to the U.S., to bequeath her knowledge to the American military. These early scenes are promising, as we see Germans speaking German with subtitles, good acting from all the principals, and heartfelt story elements, such as Steve Rogers’ dad being lost at war, Steve’s girlfriend (Kim Gillingham) vowing to wait for him, Steve himself stricken with polio and volunteering for the serum, U.S. generals remarking, “He may not be Superman, but he’ll be a living symbol of what this country stands for.” (Any licensing lawsuits from DC pending, boys, for blurting out a copyrighted character from their stable?…)

Ironically, when the movie’s namesake appears, it goes downhill. Director Albert Pyun (director of ALIEN FROM L.A., featured on MST3K – another great get for this film) has no concept on how to direct a superhero movie: action scenes are soporific, badly-staged and atrociously-directed, with enough cuts to kill a small bison. Pyun’s human interaction scenes are workable, but as soon as he is required to elevate the film to the super level, he falls victim to the Peter Principle (i.e. rising to the level of his IN-competence).

The music (by Barry Goldberg) is touching at first, with the slow love themes, but retains a vaudeville jaunt and becomes ludicrous during the action scenes. Eventually, the soundtrack becomes distracting for not reflecting the onscreen action at all.

To become the Captain, Steve is put in a chair and basically electrocuted with Movie Sparks flying outa the machines. It worked for Frankenstein. [see SIDEBAR.]

Steve’s first mission as Captain America is to stop a rocket from reaching the White House, launched by the Red Skull. His new costume is rationalized as “that crazy fireproof uniform that Dr. Vaselli made up for you” (– shyeh royt! You mean golden-shower-proof uniform. But it makes sense: it was designed by a German, and Germans are renowned for their scheisse videos). Apparently, Dr. Vaselli also made Cap’s iconic shield, the physics of which are laughable – flying in unnatural arcs, basic chroma-key shots showing it boomeranging in mid-air, hitting people softly, coming back into his hand in eye-straining choppy edits; with its plastic consistency making it as formidable as a Frisbee.

Red Skull beats Cap decisively in their first meeting, through the cunning use of edit-fu. He straps Cap to the rocket and starts the countdown. Cap grabs Skull’s hand, so that he can drag him along. In desperation, Skull pulls out a big knife – and lops off his OWN hand—what the–?!! Did you even TRY to cut off Cap’s hand that was holding you? And the stupid thing is: I thought this one-handed plot point would come back to serve a purpose in the denouement. I guess *I* was the stupid one…

Cap manages to deflect the rocket, in special effects that resemble those cardboard cutout stories you made in grade school. The rocket buries itself in Alaska, with Cap stuck to it, presumably perfectly frozen in 1943. Calendar dates fly by until Cap is unearthed by an expedition in 1993, defrosts, and runs off into the snow. He Meets Cute Ned Beatty and finds himself in the world of the future – and you can bet they throw every fish-out-of-water/man-out-of-time gag in the book at him. 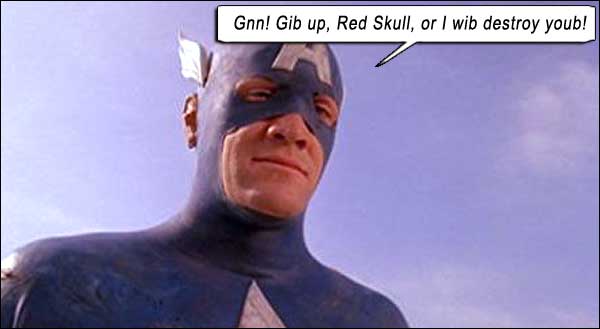 CAPTAIN AMERICA does admittedly have a few “moments” – with Salinger trying hard to seriously bring the Captain to life. Alas, the incompetence of the movie-makers around him leeched the poignancy and passion from his performance, leaving him looking like a dreamy-eyed blond dude with a flat nose and a Frisbee.

While hot German assassins track him (led by the perfect Francesca Neri), Cap tracks down his old girlfriend from the ‘40s. Gillingham in old-woman makeup looks like Gillingham in old-woman makeup. But she does a good job also playing her own daughter, Sharon. The film conveniently kills off old Gillingham, so that Cap can Run From Danger with Sharon (the most sensual type of dating) and thereby hook up with her later. (Dude, have you no shame? This is your girlfriend’s daughter! …Oh well, a man’s gotta have it. A plot point so compelling it was used 24 years later in CAPTAIN AMERICA: WINTER SOLDIER!)

Sharon helps Cap track down Red Skull, and soon serves her purpose as Damsel in Distress, under the gun of Perfect Francesca. The final face-off between Cap and Skull is also ludicrous, not only because Pyun can’t direct action, but because Skull is using aikido while Cap is still trying to connect a Sweet American Right Hook. He loses the fistfight again (some kinda hero); how he remains standing after these bitch-beatings is anyone’s guess.

Oh, that’s right, I forgot: he’s wearing his bondage and discipline suit, so he’s loving every piss-drinking minute of it…

A Spark of Insecurity.
How I can’t stand Movie Sparks! Used to denote malfunctions in spaceships, computers, drills, cars, boats, radios, you name it – if it’s electrical, then when it malfunctions, it is inevitable that big fluffy Movie Sparks will fly out of it. Tell me, Movie Maniacs, have sparks ever flown out of anything that has malfunctioned for you in your life? I want to track down the company that created those Movie Sparks and put them out of business! Idiotic Movie Sparks are so prevalent, so ubiquitous, so ingrained in our filmic consciousness that even the modern CAPTAIN AMERICA: THE FIRST AVENGER uses them to denote Cap being injected with the serum!

Of course, Movie Sparks are used because it would be anti-climactic to simply flick a switch and have nothing happen (which is how most machines malfunction) so the insecure directors of B-movie schlock thought up that grandiose method of alerting us dumbo viewers to the fact that the machinery is fubar.

Usually used to denote malfunctions, here in 1990’s CAPTAIN AMERICA, they are using them to denote that the machine is working strenuously though NOT malfunctioning, while Steve Rogers screams in his chair, presumably being pumped full of semen—I mean, serum. Which means these Movie Sparks are a part of the machine’s regular function! What?– What the hell is grinding against something else to produce those giant sparks? And what purpose do the sparks serve in basically just injecting a guy with fluid? Such high tech! I swear I gotta get my hands on the effects technician that invented this gimmick and beat him to a pulp with my low-tech shoe.