Captain America versus Iron Man in a battle to the bromosexual.

General Ross (William Hurt, playing a character from Hulk lore, in this movie where the Hulk doesn’t appear) slams down a document signed by 117 countries called The Sokovia Accords, which states “The Avengers shall no longer be a private organization, instead operate under the supervision of a UN panel, and only when that panel deems it necessary.” After everyone stops snoring, Ross tells them they have to sign the document or retire. (God knows how anyone would enforce a vigilante retiring, but that’s another beargarden…)

Half the Avengers agree, the other half grab Cap’s dick and run away. So begins The Avengers’ ideological split, the faction giving the government the middle finger led by Captain America/Steve Rogers (Chris Evans), the faction taking it in the ass from the government led by Iron Man/Tony Stark (Robert Downey Jr.) – “We need to be put in check!” (Man, I always thought Tony was a Top.) Has he been watching BATMAN V SUPERMAN? – the same plot development of the government trying to regulate supers. But which came first – the chicken or the egg? The Marvel or the DC?

Up in General Ross’ video room, it’s a backstory carnival, as he shows the assembled Avengers (Iron Man, Captain America, Black Widow, Vision, Falcon, War Machine, and Scarlet Witch) a litany of destruction from THE AVENGERS, CAPTAIN AMERICA: THE WINTER SOLDIER, and AVENGERS: AGE OF ULTRON. Before anyone pipes up and remarks that it isn’t really government surveillance footage but just excerpts from Marvel movies, Cap raises the question on how much destruction and death would have occurred had the superheroes NOT intervened? (Has be been watching BATMAN V SUPERMAN?) Can’t people tell when they’re better off? Apparently not, as no matter how good anything is, there is always someone on YouTube ready to type “fag” as the first comment.

Vision (Paul Bettany) voices the notion that due to the Avengers existing, it brings into existence “super” villains to match their excessive power. Even this is not a new idea, expressed offhandedly in KICK ASS 2. (An opposite stance is taken in the Nolan/Bale DARK KNIGHT movies, where the existence of overpowered villains spawned the need for a superpowered vigilante.) 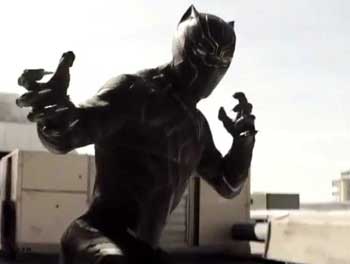 Is there any doubt this cool cat will get his own movie?

A subplot revolves around The Winter Soldier/Bucky (Sebastian Stan) and his brainwashing. Every time he is “activated” (by Russians? Hydra? SHIELD?) he goes all badboy and bombs something. A Russian agent tails him – the guy who played the young German hero in INGLOURIOUS BASTERDS, Daniel Brühl. When Winty blows up a UN conference, he unleashes the vengeance of – T’Challa! Oh yes!! As unbelievable as it may sound, Marvel dredges up one of its lesser-known yet super-cool underground heroes – King T’Challa, The Black Panther (Chadwick Boseman), an African jungle warrior, protector of his nation, Wakanda. Panther chases Winty, Cap chases Panthy, everyone doing the Movie Run through traffic. Panthy is simply all about killing Winty as vengeance for Winty killing his father. While Cap tries to fend off Panthy’s fury, he must also fend off Iron Man’s man-iron.

Cap doesn’t make it any easier on anyone to stop lusting after him, by grabbing a helicopter trying to fly away, with just his bare biceps and big American dick, in a t-shirt two sizes too small. He grabs the railing of a roof with one arm and the helicopter’s landing skid with the other, arms throbbing in sensual fury, blue eyes straining, corded thighs and taut buttocks clenched in animal thrust… He holds the helicopter only as long as it takes for the women in the audience to orgasm.

Speaking of Agent Carter – Cap’s love interest from the 1940s who looked like Bill Hader  – she dies. Enter her niece Sharon (Emily VanCamp), a smooth-bottom hottie who tries to Friend Zone Cap, for decency’s sake (I mean, this man was almost-boyfriend to her old aunt), but keeps staring into his cerulean blue peepers during business meetings. We know she just wants to be his helicopter.

Speaking of robosexual, Vision tries cultivating Scarlet Witch (Elizabeth Olsen) while he keeps her captive, when suddenly — Hawkeye! OH YEAH! The superhero we were all waiting for! Bringing with him a level of action like an assistant manager at a grocery store, Jeremy Renner is still inexplicably Hawkeye, rescuing Wanda from Vision, meaning that Wanda puts a hex on Vision while Hawkeye watches. Big help. (That’s what they call him down at the grocery store.) 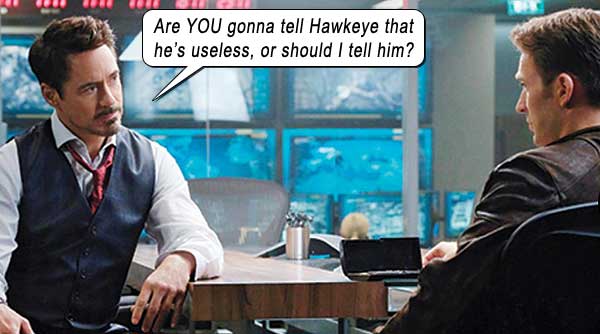 Straight from his first miscast movie as a superhero, Paul Rudd as Ant-Man, kinda amazed to be around Captain America’s groin. You and us both, Rudd. Anthony Mackie is still Falcon, Cap’s bro who is not jealous at all that Cap gives more ‘mance to Winty. (Falcon has a stupid electronic drone sidekick called Redwing; in the comics, it’s a real falcon.)

It all comes down to the airport scene, right? For months, people have been wetting their panties for this action scene which features every single hero in the film going mano a mano against every other hero. For easy understanding, we lay it out thus:

But it is the single stupidest, illogical, irrelevant sequence in the movie. All the heroes gather together at an airport runway and run at each other to – we presume – punch it out. This is what the fate of the world boils down to? Punching? Widow even says to Cap at one point, “Do you really wanna punch your way outa this one?” Of course he does, woman! He’s a White American Male… Do these super-powered beings even need to run at each other? Nearly all of them have capabilities to attack opponents without going near them. Even Hawkeye! (BTW, why is Hawkeye running at Iron Man and War Machine and Vision? What’s he planning on doing when he gets to them?) Then there’s Scarlet Witch and Vision – two MAGICS who could’ve done all this from home! The scene forces us to ask: Why is this movie under the CAPTAIN AMERICA brand anyway? There are more Avengers in this film than there were in THE AVENGERS.

This scene is simply a dead end. It’s the superhero equivalent of a car chase, a drum solo by Phil Rudd, a speech by Donald Trump – something which goes nowhere and means nothing. Is anyone really trying to hurt anyone else? They’re all goody-two-shoes, all working for the benefit of society, and they all know it. They’re pulling their punches and girl-slapping and half-heartedly lasering each other – for what? Look, just fuck and get it over with!

The only character arc is Black Widow (Scarlett Johansson), who helps Cap and Bucky escape to go do some ambiguously-bromosexual things in Russia. For which Tony has a zinger, “Guess it’s not easy to stop being a double agent!” Oh, snap!

Suddenly – Spider-Man! Tony recruits the barely legal webslinger (Tom Holland), and almost fucks his Aunt May (a steaming Marisa Tomei). Apparently, Tony also bequeathed Peter Parker his Spidey underoos. It’s a fun performance of a zygote Parker (“Hey, anyone seen that really old movie, THE EMPIRE STRIKES BACK?”), but also a slap in the face to Andrew Garfield, who gave a grand nuanced performance in AMAZING SPIDER-MAN 2 and was vilified when the grosses went down through no fault of his.

Spidey, on Cap’s shield: “That thing does not obey the laws of physics at all!”

Tony speaks to his new computer, Friday, about something disconnecting his circuits – Ant-Man in his armor! – reminding us of that disturbing 1974 Batman comic (The Corpse That Wouldn’t Die) where Atom went into Batman’s brain and made him walk around and battle as a zombie to solve one last case. But why does Ant-Man act like one of those Jack-and-the-Beanstalk giants when he grows to Giant Man size?

At least there are answers to some of the most important questions that fanboys dare:

Ultimately, the amount of destruction the Avengers wreak on the airport is just as bad as any super criminal whose plan was to halt all air traffic in America.

CIVIL WAR is a sprawling epic, taking us around the world (from Lagos to London, from Berlin to Washington DC), and is generally well-directed by Anthony Russo and Joe Russo (although they sometimes fall into herky-jerky thigh-cam vision when Black Widow is taking down bad guys with her muff). It is an adult movie, with parental murders and lost friendships and moral relativism, that happens to concern superheroes. And the inclusion of the superheroes is why it sometimes falters, by catering to the inconsistencies of pitting so many super-powered beings against each other.

The final scenes are powerful yet silly. Two men, whose friendship is played very well, are at a breaking point due to a life of unrevealed lies, to save each other from a life of pain. 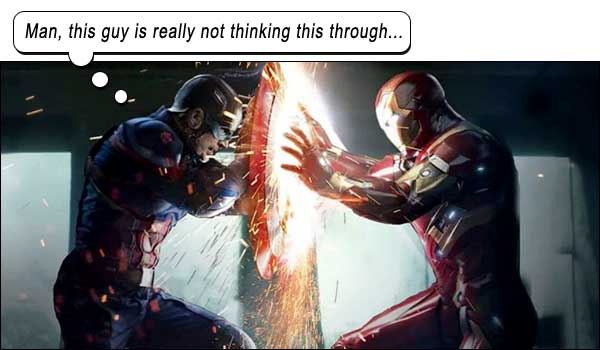 In one respect, Iron Man is perceived in this movie as a pussy, trying to make his friends drink the gubmint Kool-Aid. On the other hand, it could be seen as Iron Man trying to save his friends’ lives, as the government would surely kill them if they remained outlaws. What to do? The universal solvent: punch. Although pitting Iron Man against Captain America is laughable. Like Superman against Batman. With the same solution: Just shoot him in the face.

THE POWERFUL: It is so majestic, it is cover art. Cap and Iron Man locked in stalemate; Cap with shield raised, Iron Man whooming both palm repulsor rays straight at it.
THE SILLY: Are you serious, Tony? Shoot at his legs. (Even Spider-Man says to Cap, “Mr. Stark said to go for your legs!” Which means Tony knows this tactic – yet chooses to keep both palms aimed at the shield.) Look, it’s easy, angle one down at those majestic supple thighs and then we can all go home.