In World War II, a patriotic American weakling, Steve Rogers, is injected with a top secret military serum to become a super soldier. Yes, it’s Captain America! The red, white and blue avenger, in the best comicbook movie of the decade – and by that I mean, it’s lightweight and predictable and aimed at twelve-year-olds.

CAPTAIN AMERICA: THE FIRST AVENGER captures all the spirit and action and derring-do of the Marvel Comics character created by Joe Simon and Jack Kirby in 1941; just as that blond, blue-eyed super-patriot leaped off the pages in his battle against Hitler, so too does this latest filmic All-American Whitebread prettyboy… Trouble is, besides his interesting origin tale, and despite his iconic flag-wrapped butt, there was never much depth to this particular Marvel Comics superhero in the first place.

So I mean it when I say the movie is well made, beautifully shot in ochre hues, with the actors putting alarming conviction into their relatively shallow roles, but Captain America himself (played with body-shaved sincerity by Chris Evans) is just not that interesting a character. All he does is throw his shield and punch people. And leap like Air Jordan, sometimes while throwing his shield and punching people. Thus, after an interesting buildup to the injection of skinny Steve Rogers with super soldier serum, the movie gets down to shield-throwing, punching people and Air Jordaning. Albeit, very nicely.

Stanley Tucci is the good doctor Erskine who experiments on Rogers and is killed off much too soon by a German spy. I love The Tucci – what a great actor and underrated director; even in this death scene, his final wordless gesture is magnificently performed – but I think he picked up his “Cherman” accent by watching HOGAN’S HEROES.

Hugo Weaving‘s Nazi accent is not much better, as I’m sure he’s mixing in a little Elvish. He’s Jonathan Schmidt aka The Red Skull, also imbued with super serum, but because he’s Cherman, he ended up “bad.” Luckily, he didn’t need any makeup to play Cap’s craggy-faced nemesis – those cheekbones, like a Swiss model! Toby Jones is the Red Skull’s sycophant, and his German accent is so bad, I’m positive he didn’t even watch the HOGAN’S HEROES episodes provided by the filmmakers as homework.

And Sebastian Stan is Cap’s pal, “Bucky” Barnes – in the comics, the ambiguously gay Robin to Cap’s Batman, in this movie, a rugged heartthrob himself when the mighty man-beauty of Evans is not standing next to him. In tights.

When Steve Rogers is a 90-pound weakling, it is Chris Evans’s face computer-inserted over a skinny guy; an astonishing special effects feat that makes us realize that the era of the Method Actor gaining or losing weight may be past (De Niro in RAGING BULL, Bale in THE MACHINIST, Emile Hirsch in INTO THE WILD); just keep those computers rendering and those I.T. guys fed. Gotta admit that Chris Evans looks exactly what you’d expect an All-American boy to look like, and he’s playing THE All-American Boy; his second superhero role, having been Johnny Storm/The Human Torch in FANTASTIC FOUR. Man, that guy must get laid like he’s the last man on Earth.

CAPTAIN AMERICA, like all modern superhero movies, is filled with winks aplenty to the audience – I’m sure there’s a fan site or facebook page already devoted to pointing them all out – all I will mention is that the Captain America comicbook we see in the montage is actually the first Captain America issue; and Stan Lee makes his appointed cameo, this time as a disappointed general: “I thought he’d be taller!”

It’s one of those action movies you can watch with one eye on the screen, one eye on your text messages, one hand in popcorn and the other hand in your date’s pants – well, at least that’s how I watched it – and still get its message: Germans bad, America good. Salute. Repeat.

Director Joe Johnston (THE WOLFMAN 2010, JURASSIC PARK III) is so erratic that the film “works” in so many tiny ways (the colorful caricature of Captain America selling war bonds, the gruffness of Tommy Lee Jones disguising his understanding heart, the flip manner in which Captain America refers to himself – and how damn cool is it when he throws that shield?) and simultaneously doesn’t work in bigger ways. For example:

To intercept a moving train, Cap’s squad must slide down a cable – which has no purpose being on that mountain other than to provide their Tinkerbell moment; once onboard the train, they battle bad guys in freight cars with road cases stacked on shelves – with none of the cases strapped down; when the bad guys shoot at Cap and miss (obviously because they’ve graduated with honors from the Stormtrooper Training Program on Bespin), Toby Jones has to yell at them through their headsets, more than once, “Kill him! Fire again!” Really? I thought he was free to go after I missed him the first time… Then Bill Hader turns up with her squad of reinforcements. Take note that all the soldiers are in full battle gear including helmets and body armor – all except for Bill. No helmet or body armor. Why? So we can see her pretty hair flounce and watch her breasts straining against the thin fabric of her uniform, her chest heaving like she’s on the brink of orgasm. Such a realistic depiction of the horrors of war.

I was almost applauding this movie for its attempt at credible science when skinny Steve was placed in the Manulator and doused with Vita-Rays (which, from the results, seem to automatically body-shave you), but then all the machines malfunctioned with Movie Sparks flying out de side. Sparks?! Really? Add that to the catwalk scene where someone must jump across as it collapses, and the climax scene where two men fight onboard a plane that is going down because no one is at the controls and we’re just asking for Brendan Fraser.

Movie ends with a promise that “Captain America will return in The Avengers.” Knowing that that movie is being directed by Joss Whedon (the mind behind FIREFLY) makes me almost wanna salute a flag. Or at least punch someone and throw my shield… 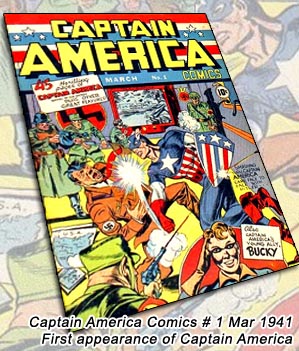