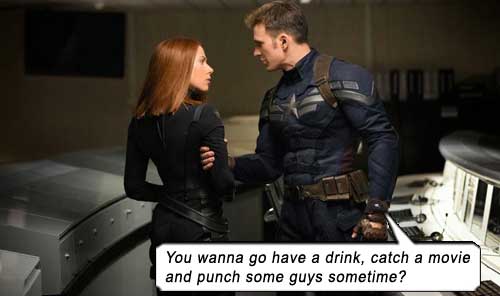 While the fate of the world teeters over the maw of the military industrial complex, while terrorism is exploited to stultify freedom, while despotic oligarchy comes waving the flag of democracy, Captain America returns to punch things.

CAPTAIN AMERICA: THE WINTER SOLDIER finds Steve Rogers (Chris Evans) aka Captain America growing up fast. Not just because he was a “Capsicle” for 50 years and missed history classes (we meet him in the opening scenes wearing a t-shirt 2 sizes too small, carrying a notebook listing modern movies, music, events he has to catch up on), but also because his Cold War schoolboy notions of intrinsic good versus intrinsic evil have been replaced by moral ambiguity, to the point where the good guys are the bad guys.

S.H.I.E.L.D., the homeland security bitches run by Nick Fury (Samuel L. Jackson), is in cahoots with Hydra, the underground organization embodied by The Red Skull in the last CAPTAIN AMERICA movie. Only Fury, Cap and Black Widow (Scarlett Johansson) are left to defend the world from bad good guys who are just trying to do the wrong right thing, by launching gigantic heli-carriers that will patrol the skies and kill nascent terrorists preemptively by studying their DNA as children (“The 21st Century is a digital book.”). Cap: “I thought the punishment came after the crime.” The head of SHIELD, Alexander Pierce (Robert Redford), explains, “To build a better world means sometimes tearing the old one down.” He aims to “bring order to 7 billion people by sacrificing 20 million.” Shades of MINORITY REPORT and Hari Seldon’s Psychohistory from Asimov’s Foundation series. 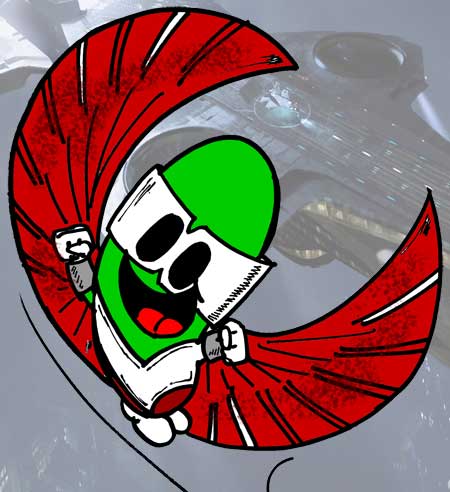 Scratch that – Chris Evans IS one facial expression. And so is his nemesis – the Winter Soldier (Sebastian Stan). It’s the first sequel to CAPTAIN AMERICA: THE FIRST AVENGER, and the filmmakers (writers Ed Brubaker, Christopher Markus and Stephen McFeely, and directors Anthony and Joe Russo) have skipped right over Cap’s comicbook history with his ambiguously gay sidekick Bucky and gone straight to Bucky being kidnapped by Hydra, memory-wiped and mechanized into the Winter Soldier. But even though his name’s in the title, Winty is peripheral to the plot, the smallest cog in a vast conspiracy, only needed for some punching scenes to fulfill action movie protocol.

Full credit to the filmmakers for bringing Captain America into post-9-11 snarkdom – it raises the intellect and stakes of the movie – but if you’re gonna retain that outmoded superhero idiom of shallowly punching “crooks,” you’ve missed the point of bringing superheroes into the modern world. These comicbook heroes were created for a simpler time, when punching could actually defeat not only criminals but crime. Even Hitler was laid out with a Sweet American Right Hook in the first Captain America issue (March 1941). Nowadays we know that “crime” is misrepresented as muggers and murderers, when the biggest criminals by far populate corporations, the government and Wall Street. Their crimes against humanity, poverty and decency are responsible for more muggings, murders and misery than any ten thousand small time crooks, and that’s a bit harder to roundhouse or uppercut.

the message (or lack thereof) is in the punching…

Now don’t get me wrong – WINTER SOLDIER is an excellent action adventure, with overwhelming, seamless special effects and spectacular direction and editing in the fighting sequences.

However, the conceptual problem with this movie can be encapsulated in one scene, which is unintentionally a metaphor for the movie: In a bunker filled with computers and monitors, Cap and Black Widow listen in horror as Zola (Toby Jones) gives a Villain Speech outlining Hydra’s plans from one of the monitors. In frustration, Cap destroys the monitor with a Sweet American Right Hook. Without missing a beat, Zola’s voice and visage emanate from another monitor.

And that’s the movie in a nutshell: Even if you stop the title character – the Winter Soldier – you are doing ABSOLUTELY NOTHING to stop Hydra, which is the real threat.

The movie’s focus seems skewed, because the Winter Soldier is a grunt, a janitor, created to clean up after the big boys. Winty is no Red Skull determined to win a World War; he’s no Loki, who wants to rule the Earth; he’s no Galactus, who wants to eat the Earth; he’s no Lex Luthor, who wants to buy California; he’s not even General Zod, who just wants everyone to kneel before him. He’s a cyborg with amnesia. The greatest threat of this movie – the hovering heli-carriers with guns aimed at millions of people – Winty had nothing to do with! SHIELD and Hydra are toppling empires around him while they send him out to punch stuff. 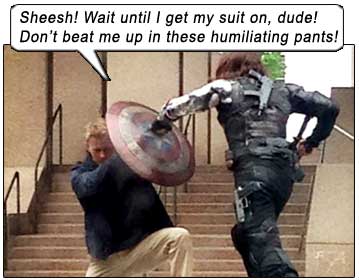 Even with just one facial expression, Cap expresses outrage at the heli-carriers when Fury tells him, “For once we’re ahead of the curve on crime.” Cap: “By holding a gun on everyone on Earth and calling it protection? This isn’t freedom – this is fear!”

Way back in THE AVENGERS, SHIELD were building a secret arsenal of WMDs, so this is nothing new, but – like 9-11 – they have exploited threats of terrorism for their own agenda (I’m not EVEN going to mention that real-life two-headed Hydra Bush-Cheney here…) Pierce at one point even says to the hologram council: “Maybe someone needs to oversee us?” (In other words: Who watches the watchmen?) Jenny Agutter returns on the council, and proves to be hot on the hoof as an action woman. But where is Powers Boothe? (For you youngsters wondering why I keep saying the aged Agutter is sexy, I have two words for you: LOGAN’S RUN.)

If anything positive came out of 9-11, it’s plot points like Zola telling us, “If you tried to take freedom – they resisted. Humanity needed to surrender its freedom willingly.” Thank you, Terrorists (meaning al Qaeda and Bush-Cheney, of course).

For those who came in late, Steve Rogers visits a Captain America Museum of Backstory. And it’s nifty how they wangle Cap back into his old recognizable duds from this Museum (which also involves Stan Lee as a security guard).

Nick Fury’s car chase goes beyond Onstar and Siri: bulletproof windows that can repel pointblank bazooka blows, it talks to him, can drive itself, can fly, has machine guns, GPS directions to “get me the hell off the grid!”, and I think I saw a unicorn. “The path of the righteous man…” is inscribed on Fury’s gravestone (PULP wink)…

The directors of all the BATMAN and TAKEN movies can take some cues from Anthony and Joe Russo, their cinematographer Trent Opaloch and editors Jeffrey Ford and Matthew Schmidt. The fight choreography, filmic technique and VISUAL CLARITY are excellent – we can clearly see every little gesture even though all the combatants are moving in real time at great speed; we can actually see Winty flipping a knife and catching it midair during battle; each bodyslam, each creative shield swipe, and of course, each Sweet American Right Hook.

To ease out the blazing testosterone – Scarlett Johansson, with a horrid hairstyle. Her voice is still bedroom come-hither, and she’s extremely curvy-sexy as she runs and fights in the streets, but that stupid flat hairstyle is just highlighting her big nose, which I’ve never noticed before because I was distracted by her hair to focus on her tits. 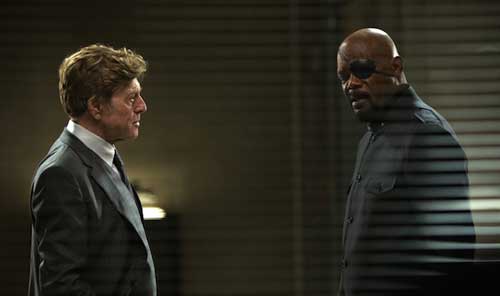 ”Don’t stare at me that way. You KNOW we’ll always have Paris…”

In the final telling, you know who wins? The bad guys. The three heli-carriers are brought down in searing scenes of grandiose destruction… but imagine the INSURANCE on those megaliths? You don’t buy a Lamborghini if you can just afford the Lamborghini – you have enough capital for the maintenance and insurance. If the Lambo goes down, the insurance company’s gotta give you another. I’m sure the heli-carriers are covered against malicious sabotage – which is what Cap does to them – so even though it might be rough sailing for those asshole insurance companies to cover a trillion dollars times three, they’ve got to come up with the funding to replace them. Right? Let’s face it, SHIELD and Hydra are tied into world governments, insurance agencies, weapons contractors, etc. If Cap thinks he’s destroyed the means by which they can terrorize the world, he’s forgotten that with the insurance money, they’re just going to start work on another Death Star. Who’s going to stop them? They are The Law, they are Above The Law, Outside The Law, they are Too Big To Fail and Too Big To Nail.

Captain America is the new SUPERMAN. And by that I mean, his chest is broader than, his eyes are bluer than, and his acting is more wooden than – Christopher Reeve. And – like Superman (in the movies at least) he is relegated to solving problems at their tail end.

Modern superhero tales usually involve the hero being stripped of his abilities and made to doubt himself. There is an interlude where Cap opens up to Sam Falcon, but it is more about doubting the motivations of his leaders than doubting himself: “I thought I could throw back in and follow orders – it’s just not the same.” When Sam asks, “What makes you happy?” Cap replies, “I dunno.” Which is not so much self-doubt as a cry for help. For acting lessons. Well, maybe by the next installment, Cap’s new world will teach him to grow up just a little bit more.