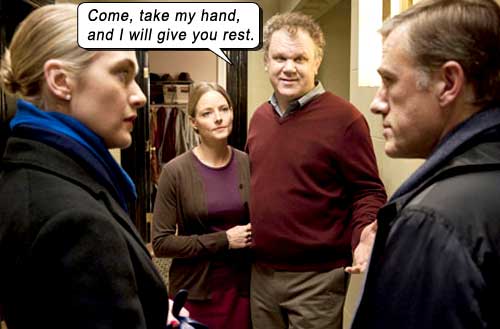 Two couples whose sons were involved in a school fight meet to discuss how to deal with their sons. And fight.

Jodie Foster and John C. Reilly are Penelope and Michael Longstreet, whose son lost two teeth being hit with a stick by the son of Nancy and Alan Cowan (Kate Winslet and Christoph Waltz). Film opens with Penelope at her computer, surrounded by the others, writing a statement about the incident. There is disagreement over the phrase “armed with a stick,” which is resolved quickly to “carrying a stick,” but we immediately sense the façade of amity that every character has thrown up around themselves to get past this uncomfortable meeting with strangers.

The beauty is in watching the erosion of that façade.

Director Roman Polanski (THE PIANIST) turns Yasmina Reza‘s French play, LE DIEU DU CARNAGE, into a quirky little thought experiment. “Thought experiment” because, though this situation has been lived by countless parents over the millennia, Reza decides to keep the two sets of parents in the same room until entropy is attained. (Entropy: not just a thermodynamic steady state, a German doctrine of inevitable social decline and degeneration.) Because if you draw anything out long enough – friendship, marriage, treaty, contract – it will disintegrate due to humans being human.

The four actors give excellent performances in this well-directed dramedy, constantly reminding themselves they are more sophisticated than savages and that they should not descend to incivility. Yet we can see where all roads are leading, as they alternately blame, bond, accede guilt, ally, bully, vent, belittle, taunt, accuse, and ultimately resolve nothing.

Reilly seems slightly miscast (a talented actor whom we’ve grown accustomed to seeing as a screwball), yet he holds his own against these Actor’s Actor heavyweights. His Michael is self-admittedly a gruff guy who is faking civility, and would probably not even care about his son’s incident if it were not for his wife Penelope forcing the drama.

Waltz (in the few English roles we’ve seen him in), as always, the most studied, sober and deepest in the skin of his lawyer Alan, allowing himself a breeziness that shows us he is also not too concerned about the universe collapsing on what were once simply boys-will-be-boys actions. Though he would much rather be someplace else, almost seeming callous about the fates of the two boys, he still manages to sporadically exude that snakecharm ominousness that defined him in INGLOURIOUS BASTERDS. When Penelope mentions his son “deliberately” hitting her son, his smile is toxic, “Why do you have to slip in the word ‘deliberately’? What kind of lesson are you trying to teach me?”

Winslet is at turns a gracious guest and drunken alleycat. Like the rest of the cast, her Nancy is trying in vain to be upper class and almost succeeding. Vomiting over Penelope’s art books doesn’t help, her “proper” demeanor further deteriorating under alcohol.

Foster’s Penelope has staked the most emotion in this issue, an almost fanatical desire to see justice meted out. Towards the end, her reactions are extreme; it seems like director Polanski, though he must have filmed enough varied takes, used the takes that were not the most appropriate reactions for the scene. But then, all the characters seem to get in on the inappropriate reactions, calling each names, insulting each others’ sons, emasculating, denigrating, crying, histrionics; madness which we feel would prompt any sane guests to leave, not with polite or fake excuses, but with an unceremonious “Let’s-go-honey” race to the door. Yet they all remain in the same room without fisticuffs ensuing! Is this the measure of civility? Slander without bloodshed?

CARNAGE is a snide satire on this politically correct era of coddling. In a simpler time, one schoolboy losing two teeth to another was considered part of growing up. Now First World countries seem to think children are delicate crystal angels. This statement was made – sarcastically as hell – on the SOUTH PARK episode “Sarcastiball,” where all gruffness, incivility and energy were leached out of school football games so that kids wouldn’t get hurt. Only in First World countries would anything as small as two missing teeth be turned into a national incident; where people are sooooo sensitive about injuring other people yet hypocritically want to go to war at the drop of a muslim.

Alan tells Penelope: “I believe in the god of carnage. The god whose rule’s been unchallenged since time immemorial.” Sounds less like a case of belief in a god, more like a case of humans being human.