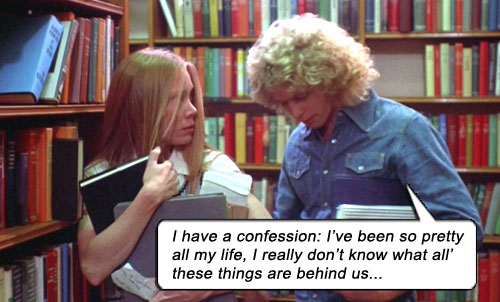 CARRIE starts with blood. And ends with blood. Startling gouts of life-giving/death-dealing blood. And in between – menstruation, high school, and religious dementia. A true horror movie. 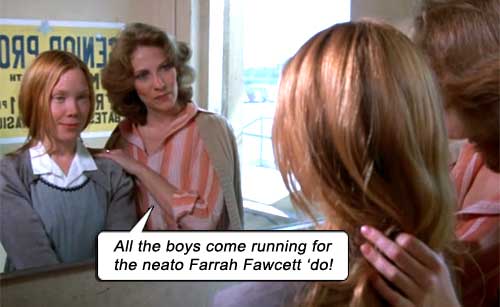 First period. Bleeding in the shower of the girls’ locker room. Terrified, Carrie cries out for help; we realize she does not understand what menstruation is. Taunted, girls jeering, tampons thrown at her, school principal callous, distraught, Carrie rushes home. We meet Mama, and immediately understand: “Why didn’t you tell me, Mama?” Instead of a sympathetic ear, wild-eyed Mama drags Carrie screaming to The Prayer Closet and locks her in, preaching brimstone for the “sinfulness” of Carrie’s period and that she must pray until forgiven by god. Bloodied Christ on the cross looking down and lending a horror hand.

With her dire ascent into adulthood, Carrie realizes she has gained telekinetic ability – the power to manipulate objects with her mind; devours books on the subject in the library. (Note for young readers: “book” – noun, a written or printed work consisting of pages glued together along one side and bound in a cover. Can be read like any online blog. “Library” – noun, a building containing a collection of books, i.e. olden days internet.)

Teen girl, anti-social, unpretty, confused, bullied incessantly, browbeaten religiously… now with the power to retaliate, with the world as her weapon… 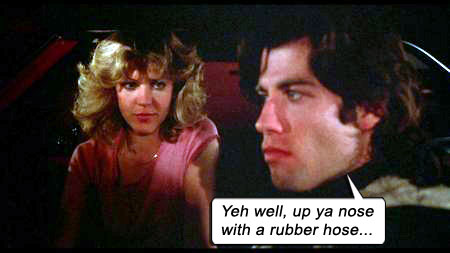 And now – the Boys: there’s a blond (of course!) and a brunette. And like so many movies and shows that feature this duo type, the pretty blond whom we think will conquer the world falls by the wayside in favor of the dark rogue: BOSOM BUDDIES (Scolari and Hanks), STAR WARS (Hamill and Ford), MAD MAX (Goose and Max), BILL & TED’S EXCELLENT ADVENTURE (Winter and Reeves), GALLIPOLI (Lee and Gibson)… Here, the blond is William Katt as curlicued Tommy, the nonstop dreamiest boy in school and Sue’s boyfriend, whom she cajoles into taking Carrie to the prom, feeling remorse for her bullying and wanting to sincerely atone by offering Carrie an innocent night with her sought after boytoy. (So sad that Katt’s only recognizable legacy is ultimately THE GREATEST AMERICAN HERO, 1981). While unrepentant Chris Hargensen dates a dark horse, a dreamy-eyed thug who can’t quite act, in his first featured film role “…and introducing John Travolta.” (In one short year, SATURDAY NIGHT FEVER would catapult Travolta into the night sky amongst the panoply of stars.)

This simple tale of revenge is unfurled creatively: screenwriter Lawrence D. Cohen hones King’s story to its barest emotional beats and director De Palma keeps us on edge by framing it furtively, like the angles a wild, caged animal might see. Once again disproving King’s own aphorism, “It is the tale, not he who tells it.” I’ve always disagreed with this simplistic notion. It is not the tale, but he who tells it. Were this straightforward juggernaut in the hands of a lesser director, well… just see what they did in 2002. (With that inferior remake, we can see how integral director and budget are to telling a tale. King has suffered much ignominy after his initial spate of quality adaptations (SALEM’S LOT, THE SHINING, THE DEAD ZONE), so he should be the first to admit that “the tale” is nothing without a good “teller.”)

For leading the bullying girls, unrepentant Chris is suspended from school (and the prom – heavens, no!), so plots to get even with Carrie, enlisting her Sweathog boyfriend to kill a real hog and drain its blood, planting the bucket above the stage at the prom hall. I tell ya, with all the Machiavellian plotting Chris achieves to place Carrie directly under that bucket on prom night, she should be either a politician or a hitman. Unravel one thread and the plot falls to pieces.

Thus, the iconic scenes of Carrie onstage during her one moment of joy – drenched in blood. A metaphor that teen girls and the teen guys trying to make them during the wrong phase of the moon are well acquainted with. De Palma splits his screen into comicbook frames, so we can see Carrie’s deathly stare and the results of her telekinetic retaliation simultaneously. With each mental strike, a violin shriek (PSYCHO copyrights be damned!). The school burns. All those who laughed now scream in agony. Because of its revenge premise, CARRIE has always seemed more visceral satisfaction than horror.

The horror is Jesus. And Mama’s ungodly love of him.

When Carrie stumbles home for solace in the arms of Mama, Jesus just won’t let Mama go, as he whispers in Mama’s ear that the devil in Carrie has to be killed with a big knife to the shoulder blades. Carrie’s last stroke is to crucify Mama with bladed implements. Back in 1976, these beats were not played offhandedly as nowadays they are, to a generation inured to creative one-dimensional violence. Back then, a daughter telekinetically stabbing her mother to death birthed a new horror genre. And we can see the emotional cost of each action on the characters’ faces. Sissy Spacek and Piper Laurie received Academy Award nominations for their performances.

And everyone lived blondely every after. 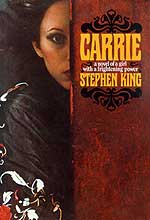