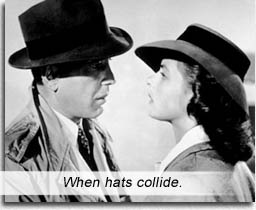 Leonard Maltin calls CASABLANCA “The best Hollywood movie of all time”; it won the 1943 Best Picture Oscar; voted #2 film of all time by the American Film Institute; Roger Ebert effuses, “Casablanca is THE movie”; it boasts one of the most regal Hollywood stars in Ingrid Bergman (in the movie that would catapult her to stardom), and the cynical founder of the Holmby Hills Rat Pack, Humphrey Bogart, one of the eras manly sex symbols, even though his face resembled the underside of a running shoe.

Some movies were great back then, and stay great: CITIZEN KANE, SEVEN SAMURAI, GENTLEMAN’S AGREEMENT. Poor CASABLANCA has dated badly – due to censorship at the time not allowing the filmmakers to solidly portray a married woman cheating, censorship on what could be shown onscreen to denote “passionate affair,” contention over the nihilistic lead character necessarily having a heart of gold, the faults go on… After decades of progress in American film, CASABLANCA, though it has insinuated itself into popular vernacular as a “great film,” is nothing more than a talky cardboard romance thriller, with overacting threatening to send us into a melodramatic swoon and enough soft-focus on Ingrid Bergman to make us cross-eyed.

During World War II, Rick (Bogart) and Ilsa (Bergman) had a steamy love affair in Paris, which involved lots of kissing with their mouths closed and lots of hugging with their clothes on. Years later, Rick runs a gin joint in Casablanca, The Café Americain, a stopover in Morocco for refugees from Nazi-occupied Europe on their way to America. It’s kinda like the Cantina in STAR WARS, except all the aliens are illegal. Peter Lorre cameos as Chewbacca, and Sam the piano player (Dooley Wilson) plays As Time Goes By by flapping his hands up and down on the keys like a seal. “You badly synched it for her, you can badly synch it for me.” 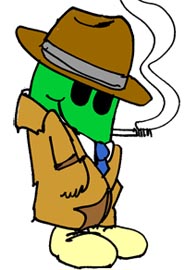 Play it for Poffy, schweetheart!

When Ilsa and her activist husband Victor Laszlo (Paul Henreid) seek egress through Casablanca to The States, they seek out Rick at his Café (“Of all the gin joints in all the towns in all the world, she walks her pointy bra into mine”), knowing he has Letters of Transit that would confuse the Nazi stormtroopers hunting them due to Laszlo causing a great disturbance in the Resistance on Tattooine. “These aren’t the droids you want. Move along.”And Rick and Ilsa reignite their love affair by meeting in dark rooms and talking a lot with their clothes on. Rick’s refrain, “We’ll always have Paris” makes us wonder why he doesn’t tear off her pointy bra and make Casablanca the new Paris. Everyone constantly drinking and smoking, yet no one ever gets drunk enough to have a Sexy Party. Censorship, thou frigid mistress.

Claude Rains is an unscrupulous, stylish weasel of a frog, a French officer who is nonchalantly AC/DC when it comes to helping either Rick or the Germans – whoever can benefit him the most. Conrad Veidt is Nazi Strasser, bedecked incorrectly in a Luftwaffe uniform.

Evidence abounds that CASABLANCA would not make it through today’s muster onto the silver screen. Based on the play by Murray Burnett and Joan Alison, “Everybody Comes to Rick’s,” imdb trivia tells us “in 1980 this script was sent to readers at a number of major studios and production companies under its original title. Some readers recognized the script but most did not. Many complained that the script was “not good enough” to make a decent movie. Others gave such complaints as “too dated,” “too much dialogue” and “not enough sex.””

According to actress Geraldine Fitzgerald, Bogart and Bergman themselves “thought the dialogue was ridiculous and the situations were unbelievable…” Yet the movie remains a classic for most film aficionados. Back when they were starstruck kids it was “the beginning of a beautiful friendship.”

Ah, to me, “the problems of three little people don’t amount to a hill o’ beans in this crazy world.” I couldn’t have melodramatically said it better, Humphrey.