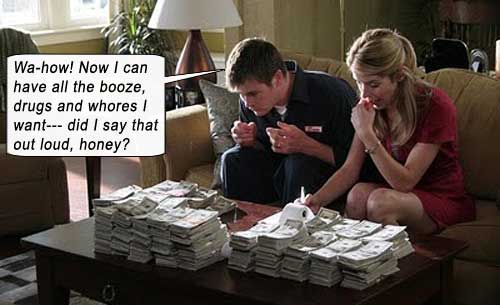 Young couple Sam (pre-THOR, pre-acting Chris Hemsworth) and Leslie (Victoria Profeta) think all their financial troubles are over when a suitcase of cash falls from an overpass onto their car. But their troubles have just begun.

Sean Bean plays dual roles, as the man who threw the suitcase out of a getaway car (Reese Kubic, who lands in jail), and his twin brother Pyke Kubic (was the name Dyke Rubik’s Kube taken?), who ingeniously tracks down the cash and asks for its return calmly. At first.

After debating what to do with their find (for about three-point-two seconds, which is three-point-two seconds longer than most of us) Sam and Leslie go on a spending spree, buying a new car and furniture. By the time the menacing Pyke enters their house (“I’m one of those people you never meet, as long as you’re a straight and honest citizen”), they’ve torn through nearly $74,000 of the $625,731 in the case. And the anal-retentive Pyke’s going to get back all of it, down to the last cent. (We realize exactly how fanatic a penny pincher Pyke is when he breaks the nose of a hotel clerk over a piddling amount of refund.)

During his stay with the couple (smoking in their non-smoking house, tainting their vegetarian fridge with red meat, making advances on Leslie), Pyke has some insightful things to say about the double standard of the female gender. If we take it his observations about the venal nature of people are correct, “When it comes to cash, nobody can be trusted,” then it stands that his insight into society’s mollycoddling of females is also correct.

After civilly returning most of the cash, Sam and Leslie think they can walk with the goods they’ve already bought – but Pyke (rightfully) wants the value of those goods returned as well. In cash. Now CA$H jumps into overdrive, as Pyke forces them at gunpoint to commit robberies to make up the difference! (Which Leslie takes to like a bad girl who needs to be spanked. A character defect, or another commentary on the nature of women?)

There was no “right” thing to do: If they surrendered the cash to authorities, individuals in “the authorities” would abscond with the cash through “legal” paperwork that would make the cash disappear into their pockets. Why do we even pretend to doubt this? So schoolyard ethics seems to be the best route: Finders Keepers, Losers Weepers. But if the real owner finds you, as “good” people, you surrender what is rightfully theirs. So why are Sam and Leslie “righteously angered” that Pyke is forcing them to return even the money they spent? It’s HIS (stolen) money! The fact that it’s stolen was moot to Sam even at the outset, as he had rationalized to Leslie on why they shouldn’t return it, “If it’s stolen from a bank, the bank’s insured!”

Other than the fact that writer-director Stephen Milburn Anderson seems to have women issues, CA$H exposes raw truths about the lengths any human would go to for a slice of security in this society that has placed wealth on a pedestal.

In the final frames, just when we think everything is about to work out for our lusty couple, they are about to find out that, ironically, cash comes with a price!