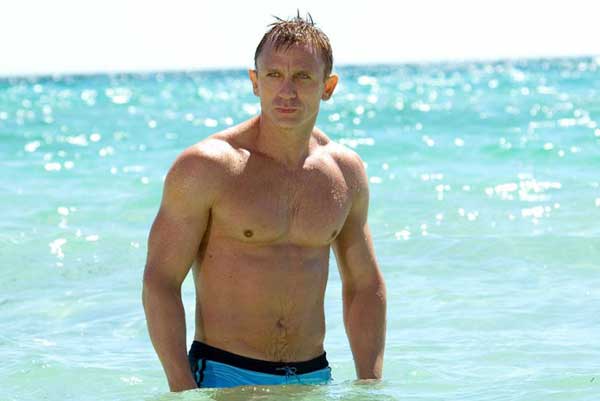 International espionage will never be the same. It is now certifiably MAN-HOT.

Last seen in London baking a LAYER CAKE (2004) and again in MUNICH (2005) ineptly gunning for terrorists, hawk-eye intense Daniel Craig is now the once and future James Bond.

“Re-imagining” has become a dirty word, but writers Neal Purvis, Robert Wade and Paul Haggis, and director Martin Campbell (who also directed Pierce Brosnan’s first Bond GOLDENEYE, 1995) have re-invented re-imagining. Originally made into a film in 1967 (from the first Ian Fleming novel and first James Bond novel, published 1953) as a spy spoof starring David Niven, Peter Sellers and Woody Allen, CASINO ROYALE has now been re-wrought to portray The Rise of Bond, while simultaneously introducing the 38-year-old Craig as the New Bond.

We are being sold that CASINO ROYALE supposedly predates Bond’s first adventure DR. NO (1962), as we meet Bond in a well-structured opening sequence, prior to being assigned his license to kill, which requires two kills for “double-oh” status. (Well, it’s a double “zero” really, isn’t it? And how do you, in fact, make two kills “legally” if you NEED two kills to GET a “License to Kill”? Seems even superspies suffer the same job-experience conundrums.)

Two – ahem – “illegal but legitimate” kills later, the famed 007 status resting squarely on his v-shaped torso, when Bond sits at a plasma laptop computer, we realize there is something shaken not stirred with this concept of “The First Bond.”

In what should be termed the STAR WARS Syndrome, technology in CASINO ROYALE far surpasses anything that Q could conjure up in the supposedly “succeeding” storylines. If the inclusion of cell phones and Photoshop are not enough to skew your suspension, a character refers to 9-11! Well, for sure this ain’t Sean Connery.

Banking on our love of Bond-age, the producers do not deviate from this anomalous concept, and we eventually settle into “it’s just a movie” mode and enjoy this grand experience on its merits. 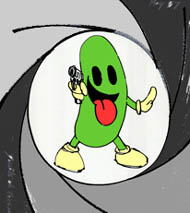 Daniel Craig may now be the “first” Bond, but he is burdened with the legacy and baggage of all who came before him (or, uh – “after” him). To traditionalists, this terse maverick with the stylish running style, muffin-fresh pecs and “perfectly-formed arse” may not be the best Bond, but he is arguably near the top.

The opening chase and capture sequence sets the bar high, as Bond and his quarry (real-life British “free runner” Sebastien Foucan) defy the laws of physics and do the Cirque du Soleil over cranes and girders like gibbons. When Bond purposefully strides into the runner’s HQ and pummels everyone creatively, then blows up the runner himself – we acquiesce this ain’t Roger Moore.

There is nothing fey about this Bond. Disdainful, cruelly vicious, his savage blue eyes expressionless as he kills without quips – this ain’t Pierce Brosnan either.

While M (Judi Dench) questions Bond’s worth as a double-oh agent, Bond uncovers a chilling villain who weeps blood, Le Chiffre (Danish film star Mads Mikkelsen), and the film gets all European, as Bond challenges Le Chiffre to a card sharking at the Casino Royale in Montenegro.

The great Jeffrey Wright is Felix Leiter, Bond’s remora; the 8th actor to play the role, and given just as much nothing to do as all the other non-great actors who have followed Bond around like flat-headed fish under sharks.

Speaking of bondage – here comes the ball torture. (You wincing gentlemen readers read that right.) All supposedly tough movies lose my business when they tie a guy to a chair readying him for torture – with his undies on. Modesty? Geneva Convention? Afraid they might go gay? But this scene raised my respect for CASINO ROYALE when Le Chiffre proves himself to be a Bond Villain with a difference, who doesn’t just let Bond slide with an impotent lady-whine of “Why don’t you die?!” Le Chiffre ties Bond to a chair with the bottom cut out of it – naked. And we know that something heavy duty is coming, that will involve me throwing up in my pudding – the sadist Le Chiffre… and a heavy swinging rope knotted at one end… That’s a big Double Oh! – shortened to “D’oh!” Joins the pantheon of torture scenes (the teeth-wrenching in MARATHON MAN, the fingernail-pulling in SYRIANA) which make you feel like Malcolm McDowell with his eyelids peeled open in A CLOCKWORK ORANGE. Bond quips through sac-crushing breaths, “the whole world will know that you died scratching my balls!” And we finally realize that it ain’t George Lazenby or Timothy Dalton either… 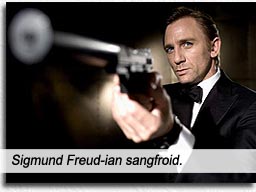 The third act is nauseating for another reason: Bond falls for Vesper in a big bad lovey-dovey kinda way, and becomes insufferable, “Whatever armor I have left has been stripped away – I’m yours.” True Love? Or vomit? Yet when Vesper sweetly seduces him with “You can have me any way you want,” our first thought is Le Chiffre’s summation of Bond’s testicular ordeal, “If you do not yield soon enough – there will be little left to identify you as a man.” What kind of Wolverine recuperative abilities does this guy possess? Is she going to pull down his pants and find a mangled mess? Or will his perfectly-formed arse distract her enough not to notice the frontal?

Seems CASINO ROYALE is trying to squeeze in everything here to play “re-boot” for a new generation: Bond acquiring his license to kill (we’ve always met Bond fully formed, license in hand), Bond settling on one woman (like he did in SPY WHO LOVED ME, MAJESTY and NEVER AGAIN), Bond’s bromance with Felix (7 other Bond movies), Bond being paired with a female MI6 agent (GOLDEN GUN), Bond Girl having stupidly sexual-innuendo name (any given Bond movie), Bond losing his love (MAJESTY)… all that’s missing is the blubber of Joe Don Baker.

CASINO ROYALE contains one of the hottest sex scenes of any Bond movie – without anyone getting naked: after Vesper is traumatized by seeing Bond dispatch two killers, he sits with her in a running shower, fully clothed, consoling, as she lets her professional guard down for the first time, instinctively snuggling into his shoulder. Down, boy!

The one redeeming factor in Bond giving his heart away is that we realize one sure thing: the woman must die. To give Bond the motivation to become the hard bastard he becomes in his upcoming adventures.

Many fans have toyed with the concept of James Bond being a code name given to various agents over the years – ironically making “James Bond” an alias! – which explains the different men playing the role… It’s not a bad idea, which was courted in the 1967 CASINO ROYALE. Although that theory should be put to rest with the scene of Roger Moore (in FOR YOUR EYES ONLY) laying flowers at the grave of his dead wife, who married George Lazenby (in MAJESTY’S SECRET SERVICE) – meaning the producers were trying to create continuity with the Bond character. Now though, all bets are off, as our minds are twisted into an alternate reality where Bond only comes into being after the internet. No more exploding pens.

Although that theory would explain the concept of the secret agent who simply tells everyone his “real” name – which Craig invokes like a stinger in the very last frames, while carrying a big modern automatic penis– I mean weapon: “Bond, James Bond.”

Are those Villains paying any attention at all? Or have they always been distracted by something else?

It all turns on that perfectly-formed arse.

“You Know My Name” ♦ Chris Cornell